My husband and I met through ChristianCafe.com at the end of 2007 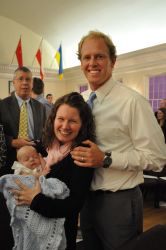 A beaming Beth and Zack with their "Cafe baby"!

or very first days of 2008, I'm not sure of the exact date of the initial message.

We noticed that we both attended one of the Torch Bearers Bible schools (though in different years at different schools) and sent several messages and started emailing daily with in a few days.

We emailed daily for three months before Zack asked if he could call me. That first phone conversation was wonderful and I couldn't listen to his voice enough!

We both look back at those emailing days with fondness knowing that was the tool God used to bring two people together who lived on opposite coasts - Zack on the east coast and myself on the west coast.

We finally met in person in June of 2008 and after several trips back and forth I was offered a job at the same company where Zack worked and moved into a house just streets away from this incredible man whom I was growing in love for more each day.

Zack proposed in January 2009 and we were married July 11, 2009. We found out we were expecting in January 2010 and July 8 our tiny 1 lb 9 oz blessing from God arrived three months early.

He is now home with us and we are enjoying our family of three. Zack and I are thankful that God brought us together through the tool of the Christian Cafe, we are so perfectly made for each other in every way!

My husband and I met in June 2006 on your website, he was a paying member and I had a visitor's pass. 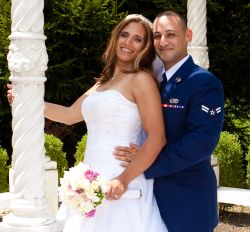 Angel pursued Ruth and look at them now!

He send me a wink that I chose to ignore, but he didn't give up he continued to send me messages until I eventually send him an automatic response.

After my trial time was up you guys send me another invitation for a few more free days and that's when my husband and I started talking more.

The funny thing about this is that my husband is not even my "type" I have always liked guys that are totally the opposite of him which is one of the reasons why I ignored him when he first made contact with me.

But when I met him for the first time I found him strangely attractive...lol. I can truly say that I have seen the hand of God in all this.

When I came to this website I was not looking for love, I was looking for God. I wanted to find a blog or a group with whom I could discuss religion with and thought that's what ChristianCafe.com was.

Like the Bible says in Matthew 6:33 "Seek first His kingdom and His righteousness, and all these things will be given to you as well." Well, on Christmas Day 2007 he proposed and on May 9, 2008 we got married.

We both owe a huge gratitude to the ChristianCafe.com team for creating a medium for us to meet. 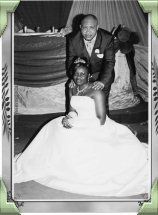 I met my husband, Cosmos, in August 2008 through this website.

Ironically we were both living in different countries at the time - I live in England while Cosmos lived in Sweden.

Six months after we met, we had a beautiful church wedding on Sat 07/02/2009 surrounded by all our family and friends. We have since set up our home in England & we both thank God each day for bringing us together.

I met someone through ChristianCafe.com in August and we are getting married this July!

I will be moving as he lives in the United States.

Love the way we can save searches and edit them.

Love the way we can copy them and then edit the copy...Huge time saver.

It was a long-distance relationship, as I was in Cape Town, South Africa and he was in Dallas, Texas (which is where we are now living).

After a short time of just emailing each other, we spoke virtually every day on Skype (despite the 8 hour time difference!). We are both very happy.

I have found someone.

Your services were great and very professional.