After an ugly divorce over which I had no control, I knew that it wasn't good "for man to be alone." 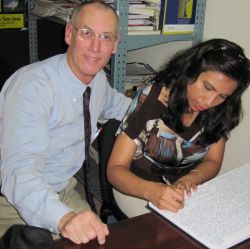 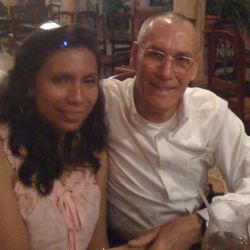 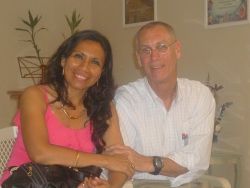 Lots of laughter from John and Mercy!

So I started looking for a Christian wife who was REALLY a Christian who wanted to lead a Biblical lifestyle. I found her on ChristianCafe.com. She's an Ecuadorian and I'm a North American. We were married in Nicaragua 23Sep10. I've never been happier. I was a member on [another singles site] and learned rather rapidly that I hated it, but even though ChristianCafe.com released more information rapidly, that's what I really wanted. And our relationship advanced very fast due to the great start we had with ChristianCafe.com. Thank you.

Thank you so much for your ministry to marriage-minded singles. 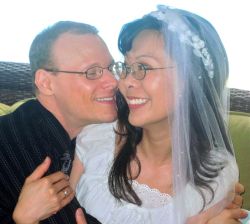 Veronique was moved by Thomas' devotion to her 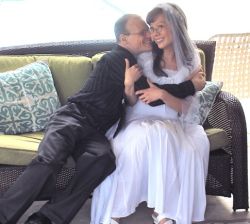 Veronique and Thomas full of love on their wedding day

I would like to take the time out to tell you that your website has been a blessing and instrumental in orchestrating how my husband and I met. 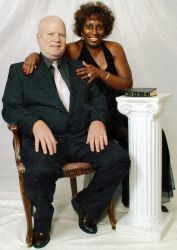 Cynthia was blessed to have George a part of her life

We met on ChristianCafe.com in July, 2003, met in person September 2003 then married November 8, 2003. I regretfully wish to inform you that he passed away on September 13, 2010. His name was George. Although it has been three months since his passing I wish to encourage and compliment your website on a successful marriage due to the move of the Holy Spirit and your heart to have couples meet and marry. My husband did send in a testimonial that we were married and I think at that time we may have missed the deadline to go on a trip as a prize. It's been seven years ago so I can't quite remember. We married impromptu during a church service on the night of November 8 (not remembering that we needed a marriage license! We were both on our third marriage! LOL!!) We married on Saturday morning during this service at 12:03 a.m. and on Monday went to City Hall in Mississippi County, Arkansas. (He was from Arkansas and I am from New Jersey). The minister forgot that he had no clergy license for this state. The Holy Spirit was in full control. We told the clerk we got married and she was in shock to find out we did not apply for the marriage license. The clerk later found that the pastor did not have a license for that state. To our amazement she backdated the marriage license as well as the minister's new license to reflect date of marriage! This story never ceased to encourage and fill people hearts with what God can do! Truly He is God!!! Attached are pictures taken of us professionally two years after we were married. May God continue to bless this website and my prayer is that many more marriages are produced as as result of it.

Angelica and I want to thank you for providing a great place for Christians to meet like-minded singles. 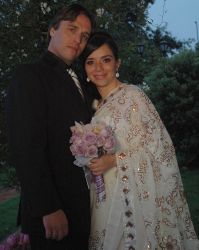 Alex and Angelica were wary of online dating but are now married!

We were both wary at first of "online dating". However, we soon discovered that ChristianCafe.com provided a great service within a great format, both of which contribute to attracting a wonderful group of people. She and I first met in September of 2008. With the aid of ChristianCafe.com, email, and other communication services, along with several in-person meetings, we would spend the next two years developing a relationship that is a friendship, a partnership, a very deep love, and one that shares the desire to be close to God. We were married in Bogota, Colombia, on November 27 of 2010, at a beautiful ceremony which included family and friends. We look forward to a long life together, knowing that it all started on ChristianCafe.com. Thanks again to all of you!

I had all but given up after a bad breakup and I was giving this site one chance. 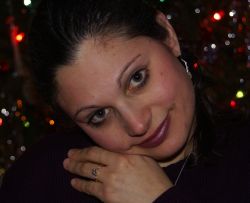 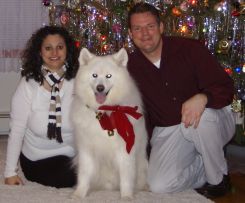 Alyssa and Bill, all smiles after their engagement 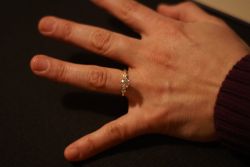 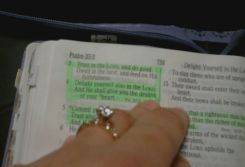 The engagement ring on the Bible

My mother had given me the money to join as a gift. I got the greatest gift from God, my husband. We are planning to marry in June.

I am happy to report that I have met my wife through your website.

We couldn't be happier. We want to thank you.

I found your website accidentally and registered, just to see what matches there were.

This was the first time I ever registered at any dating site and found just exactly what I was looking for. I will not need to look anywhere else, because my Angel was here, and wish to thank you for making my life fulfilled. You gave me hope when I lost everything in my life (verbatim EVERYTHING), and now I have a sense of life again. Thank you again and wishing you all the best.

I just wanted to say thank you so much for your kindness.

I am currently unemployed and am raising 2 children. I chose your site rather than the others because of how comfortable and easy you make it to search for love. I have not yet met my match but I have met some wonderful people here. I just wanted to say thank you so very much for the free time you offered me. Being unemployed right now, this has been a prayer place (if you will), a place that I have met so many great Godly people who keep my spirits lifted. It has helped me get though this tough time in my life. I am grateful for your generousity. God Bless you.

I just wanted to thank you for remembering me and your nice offers.

I have been a widow for about 10 years. Thanks again for your kindness and Happy Holidays.

Brilliant! Staff at ChristianCafe.com have been brilliant, thank you:-)

Thank you for such a valuable service.

I must say I was very nervous about signing up for such a web site but after I checked it out for a while I really was please. I met a man named Cleason on your site, and we were recently married June 5 2010. Your website was such a blessing to me as I was very careful who I would date and your services allowed me to meet men in a safe and protected way. I also appreciated the fact that the information on the other person helped me pick out someone that was suitable for me and I didn't have to go out with a whole pile of unsuitable men first to find him. Thank you so much, and best wishes to your company in the future.