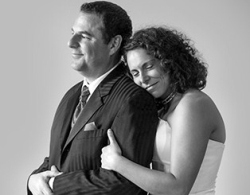 Tim and Cheryl are still in awe 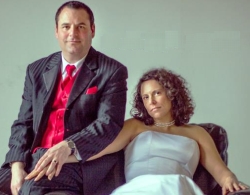 Tim and Cheryl were made for each other

Attached are two photos for you from the wedding. We clearly were made for each other and we are still in awe over how God put us together.

We appreciated your website and how it brought us together so easily. It's all about timing and being patient waiting for God to move. 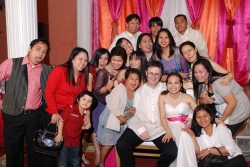 Keith and Bambi's family rejoice together 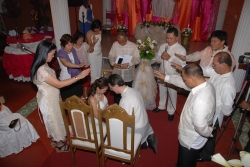 Praying for God's blessing in their lives 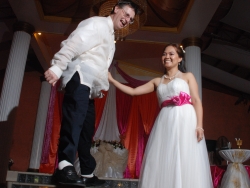 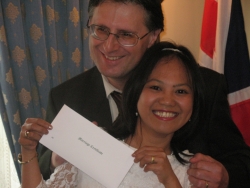 Keith and Bambi are still very happy together, 6 years after first meeting

I met Bambi, a lovely and God-fearing lady. She is Filipina and was working in Israel.

I do believe that Christian Cafe was used as an instrument to bring us together. In the couple of days exchanging messages we found out that we were both skeptical of network dating. We were both first timers and registered the same week. But we have the same passion about God, and we read same books and magazines. We both love and are called to minister to the Jewish people and this was the main starting point for our conversation.

After 6 months of chatting we met in person here in London to see God's plans. We even discussed that if it was God's will to marry then we should preserve ourselves before God. We did not want to be driven by our feelings.

We had separate prayers seeking God's will. Her going back to Israel made me realize I did not want to lose her. This confirmed I wanted to be with her for the rest of my life. My wife quoted me some of the words she heard from God, "IT IS TIME TO AWAKE THE LOVE" in response to Song of Songs 3:5, "Do not arouse or awaken love until it is so desires."

We saw God's hand working, hearing His voice in our lives regarding the relationship we are in. We saw also His "GO" signal that He wants us to be together. In her seeking time to marry me, here's what God told to her in confirmation: Song of Songs 3:11, "Come out, you daughters of Zion, and look at King Solomon wearing the crown, the crown with which his mother crowned him on the day of his wedding, the day his heart rejoiced."

She came back in 2009 and we had a civil wedding. Last year, March 2012, we went to the Philippines. We were so happy, especially my wife having a wedding where her loved ones are. It's been 6 years since we started our relationship and it's getting deeper. I never thought I would love again. Neither did she. I am happy to see her in the morning even until now, staring into my face saying "I cannot believe I am married. I set my mind only on being a single-blessed."

She has allowed me to write what she wrote in her profile: "I am here to find and know the man who owns me. I mean to him whose ribcage I was taken from so that we could share and be together in God's adventure, fulfilling what He has called us to do for His glory."

She extends her gratitude that she found her ribcage through ChristianCafe.com. We pray that your site will be an instrument to others too. God bless all who are behind this site. Attached are our wedding photos from 2009 and 2012. May this testimony be a blessing to those who will read. To the Lord Jesus Christ our God be the glory!!!

I just signed up as a trial member on ChristianCafe.com and saw through the Dating101 link that Focus on the Family has an exclusive alliance.

Well, since I have listened to and appreciated Focus for so long, I just have to say that it gives the site tons of credibility in my opinion.

I was able to find my future husband through ChristianCafe.com. We have been in touch with each other since first meeting at the end of May 2011 and are making plans to get married. Keep up the good work and may God richly bless you.

This is the first time I have used ChristianCafe.com.

I have been very blessed and I have found a very special lady. I will recommend your site to anyone who is looking for someone "Special" .