I've always believed that if God could use a talking donkey to accomplish His will, then He could use the Internet to help me find His best choice for me. 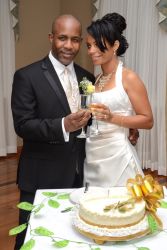 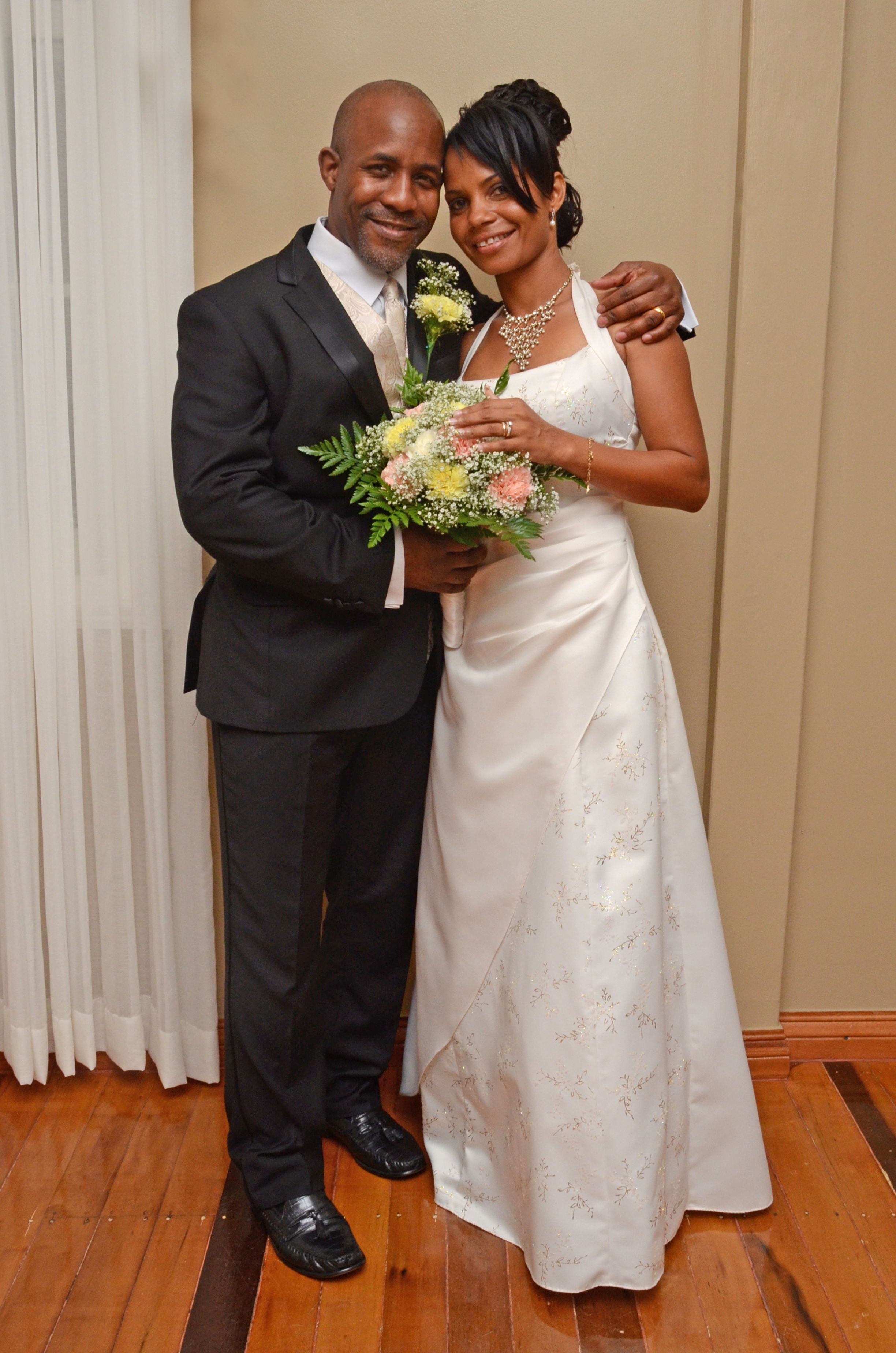 I kept asking God for two things: to give me a woman I don't deserve, and to help me become the answer to her prayers. Then, I specifically shared with my Heavenly Father (the Giver of all good gifts) the things I desired in she that would be my bride.

It was the year 2000. I was 36 years old and had never been married when I began to consider single dating sites and eventually created my first profile on ChristianCafe.com. I thought I would use technology to leverage the little discretionary time I had as a means to get me in front of eligible bachelorettes.

I purchased one to three months of access less than ten times over the years, in order to pursue a potential relationship only. Other than that, I would use the 3-day freebies the Cafe would offer approximately every six weeks.

Natasha was nowhere on my radar for various reasons, including: she was outside of my 10 year range (we have 12 years between us); she had three children, rather than my maximum of two; her children were young enough to still be in the home, but too old for me to have much of an influence on their lives: nor was it my preference to have a long distance relationship, let alone an international one.

Nevertheless, I did not close those doors completely, because I did not want to limit God in what He could or would do in my life. Natasha was very traditional in her view in how God would cause a couple to meet for marriage and was not convinced He would use the internet for this purpose, but thought she could, at least, use it to find a friend to talk to. She had recently gone through a breakup, and felt lonely and was hurting.

December 25, 2011 was Natasha's first time visiting a dating site. She used her 10 day trial, after creating a profile on ChristianCafe.com. She totally did not expect what the Lord was about to do. It was December 26, 2011, when God answered the prayers of my youth. My 'on line' profile caught Natasha's attention enough to cause her to break her cardinal rule to 'never initiate a relationship with a man.' She sent me a short message introducing herself and requesting to be friends.

I am from California, USA and she is from Guyana, South America. Before reading her mail and seeing that she was from another country, I immediately placed her on my "not gonna' happen" list. Nevertheless, I thought I should, at least, be courteous enough to reply back... besides, she looked very attractive. Lo and behold, that was the beginning of a conversation between Natasha and I that has never ended.

We met face to face, for the first time, on December 26, 2012 - one year to-the-day after we first met on ChristianCafe.com. We spent 10 days together in Guyana getting to know each other on a different level, in addition to time with her sons, extended family, friends and church.

It felt like we had already known each other for years. The morning of my departure, I asked her sons' permission to court their mother with the intent to marry her. They all unanimously agreed. We were engaged in April.

God showed up on our behalf in so many ways, and then glorified Himself before our family, friends and other witnesses as we exchanged covenant vows in Guyana on May 3, 2013! We are currently working through the spouse visa immigration process to bring Natasha and our youngest son to California.

My bride, Natasha, closes with the following remarks: "I was wrong [about how God would use the internet]. God has given me my wonderful husband that He had promised me... and He used ChristianCafe.com to do it.

He has given me a man of integrity, morals, godly character and one who possesses all of the qualities a real man is supposed to have. One who loves me the way Christ loves his Bride [the Church], as well as fears and honors God.

I believe that ChristianCafe.com is not just any dating site, but a site that God is present in. It is, also, evident that much prayer has gone before this site. Thank you for allowing God to use you in such marvellous ways!"

I wanted to write and thank you for providing such an amazing service as ChristianCafe.com. 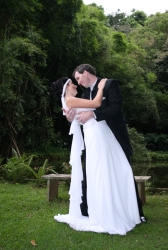 Brent and Doris on their wedding day 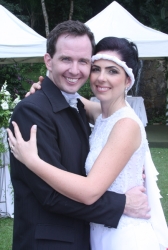 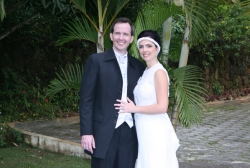 Brent and Doris look sharp on their wedding day!

My wife and I found each other on it back in 2005. She was only on the site for a week on a dare from friends. I, however, had persistently combed through the website for two or three months.

She was a Brazilian student studying for her PhD in Indiana, and I was living in Dallas. I really liked the site because I could search the entire database, specifying the level of Christian commitment I was looking for. She and I both appreciated the part of the profile which allows people to really write in depth about our walk with God and our goals for our lives.

After we'd corresponded for a few months (in April 2005), I learned she'd be leaving to do fieldwork in the Amazon for the summer. I didn't want to wait for her all summer long (not dating anyone else) unless I felt she was "the one," so I drove the 14 hours to Indiana.

It was an amazing time; we instantly felt we were totally right for each other. To prepare ourselves, we actually went through two premarital counseling classes, which were great, as we learned communication skills, etc.

We actually had a long-distance relationship for two or three years because she had to spend 2007 in Brazil and we didn't want to get married and then be so far apart for so long. But this was actually a crucial part of the relationship. Our relationship consisted exclusively of prayer and conversation, so we really talked through a lot of difficult issues and got to know each other really well before we got married. Marriage wasn't even that big of a shock because we knew each other so well.

That's truly a huge advantage that distance relationships have over in-person relationships. On ChristianCafe.com, you can ask a lot of the hard questions before you fall in love, and you can end things right up front if the person isn't good for you. It really lets you use your head before you give away your heart. Otherwise, you can really lower your standards detrimentally to accommodate the people you happen to know. It worked so well for us.

Regarding our marriage, by God's grace, it is amazing. We've been married for more than five years, and people still think we're newlyweds! Because that's how it feels!

My advice: Go into the marriage prepared to be a servant, just as Christ came to earth in order to serve us. Put your spouse first. My mother says that in marriage, you always discover just how selfish you are. This is an opportunity to surrender much of that selfishness to God and to let Him use your spouse to make you a better and better person.

Often I don't feel like doing the dishes, or vacuuming the house, or being a good, non-defensive listener, but it's crucial to put your spouse first and ask God to help you with your egocentric living. He can help if you ask!

Books we recommend: "The 5 Love Languages: The Secret to Love that Lasts" by Gary Chapman; "Men are from Mars, Women are from Venus," by John Gray (and I also loved his "Mars and Venus on a Date"); "For Men Only" and "For Women Only" by Shaunti Feldhahn; and "Just Your Type" by Paul Tieger. 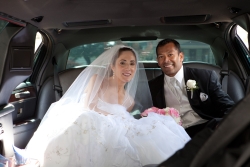 Jennifer and Sasha just after marrying in April 2012 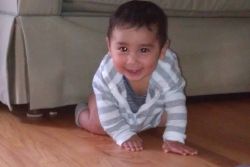 and I wrote to them to share our story but realized I should share it with you, too! I met my husband on ChristianCafe.com about 3 1/2 years ago and this past April we celebrated our one year anniversary.

In fact, I only used the 10 day free trial that ChristianCafe.com was offering, however, Sasha ( my husband) had a subscription. It was such a blessing!

I felt like I had prayed forever and at the age of 33 met this incredible, kind, loving, strong faith, brilliant man thanks to ChristianCafe.com. Anyway, I encourage everyone to give ChristianCafe.com a chance. A fantastic dating site!

I wanted to share a happy ending with you. 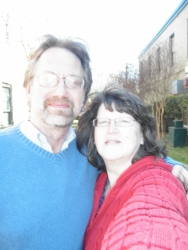 Lynn and Mark are a happy ending!

Mark and I met on ChristianCafe.com we dated, became engaged but then broke up so that he could try and work things out with his ex-wife.

God blessed our obedience and willingness to follow His direction for us and we were married on 3-29-11. We have been so incredibly blessed in our marriage...we have never even had a fight! :}

Just wanted you to know that I tell everyone about you and how God used ChristianCafe.com to bless not only our lives but the lives of all of our family members as well. God bless you and your ministry.

I would like to encourage all those that are searching for the Love of their Life - as I was.

I am turning 29 this year and I have been with ChristianCafe.com for a year and a half. After a year had passed, I began checking my email every day and searching the site more seriously.

One evening, for the first time in ages, I decided I would enter the site, on the off chance, I may get some chatting time. Sure enough... several members messaged me.

While I was chatting I noticed my mailbox flashing, I looked in the inbox and had the most wonderful message that I could have imagined from a stranger. So our story began. This man and I have been talking on the phone for hours upon hours, emailing, sending pics and texting.

We had our first date last Saturday. This was not just a coffee date... We spent 12 hours together! On Sunday, we again spent the entire day together and we are now officially dating.

Every day we share scripture with each other - we pray for each other and we are relying on God for His will to be done - in my heart, I know I am going to marry this man. I KNOW God has sent him especially for me. He is the one I have been waiting for and praying for... he is everything I have dreamed of and so much more.

Thank you Lord. There is hope! Don't Give up.... Keep praying and keep knocking because He/She could be right around the corner.

I went in totally skeptical but God had other plans!

My wife and I both prayed for a spouse, and we accidentally met on your site.

We've been happily married for 10 years now, and I thank God all the time for her.