Thank you so much ChristianCafe.com for making our relationship happen. 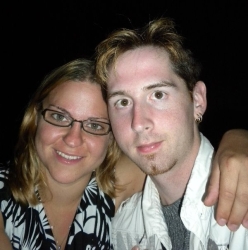 Niki is all smiles after marrying Matthew on December 13, 2013

We have been in a happy relationship for the past 3 years and we are getting married December 13th of 2013.

We are very happy and we found each other August 2011 and went on our first date Sept 14th and we on our way to a amazing future together!!

We initially met through ChristianCafe.com in late 2008. 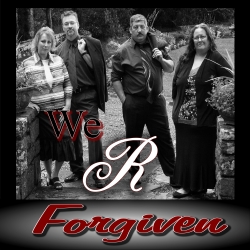 Bill and Donna are part of We R Forgiven 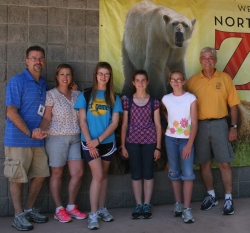 Bill and Donna and their family 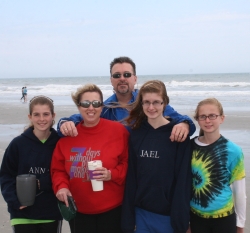 Bill, Donna and family on a windy day at the beach

We met informally in Dec 2008 but didn't start dating until Feb 2009. But we knew it was God's will and we married on Jan 1 2010!! Along with sharing our love of God and our family, God also blessed us with a music ministry. He connected us with a couple at our church and we began "We R Forgiven" Christian Quartet in 2012 and have been ministering ever since!! More than 45 events in 2013 including churches, sr events, community events and charity/fundraisers.

With our girls we love to camp, hike to waterfalls, go to Carowinds and do whatever adventures God will give the opportunity for!!

There's obviously way more to tell, but above all else, glory to God who is the reason we are together!!!

WOW!! It has been 8 glorious years since ChristianCafe.com introduced us, and we have been happily married for 7! 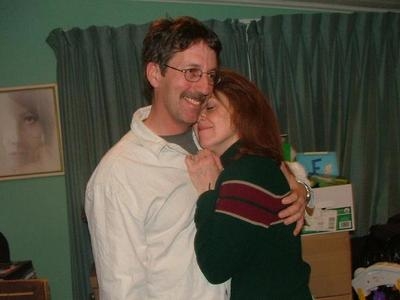 We both took advantage of your Free trial membership, but that was all we needed!

Tom winked at me and I winked back, and the rest is, as they say, HIS-tory. Although we lived 400 miles away from each other, that did not keep us apart. God knew where we were and put us together, forever.

Where can a Christian adult go these days to meet people? Not to bars or pick-up joints. But although we were leery of the computer dating services, we took a chance on ChristianCafe.com, because even though there are no guarantees on social media sites, the odds were in our favor with a reputable Christian Dating site.

It took us a while before we were actually able to meet face-to-face, but we spoke often on ChristianCafe.com "faith-to-faith"? We laughed so as we got to know each other through ChristianCafe.com messaging, and through sharing our life's stories. When we heard each other's voices for the first time on the phone, the tales and conversations were just that much more funny set to the music of our actual voices.

It was a safe and fun experience getting to know each other and finding out how the Lord had played a part in using the computer to bring us together.

We are both senior citizens, according to our birth certificates, but we feel like High School sweethearts!

Thank you ChristianCafe.com for giving us the opportunity to meet the mate of our dreams and the answer to our prayers. I hope many others will have the success that we have in meeting that one special person for whom we were praying.

My husband and I met on ChristianCafe.com back in October 11, 2011. 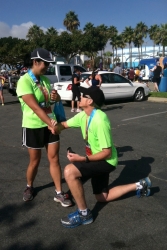 Richard proposed after the Long Beach Half Marathon 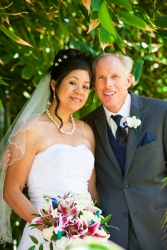 Richard and Nilda on their wedding day, in June 2013

I was previously a member for a year and I didn't meet anyone there. ChristianCafe.com has a way of contacting and bribing their previous member by giving them a change of having 3 to 5 days weekend special on them for free.

So I decided to browse and take an advantage of those days and I'm glad I did!! After writing to each other back and forth, we has so much in common. And we're only 2 hours away from each other. ;)

We continued to write to each other online...with blessedguy sharing his daily devotions with me each morning before he went to work.

We met in person after a month of writing back and forth to each other. It turned that that we have so much in common. Even though we live a couple hours away from each other, we make sure we'll make time to see each other every weekend.

We were engaged 11 months later after we finished the Long Beach Half Marathon together, and got married this June, 2013.

We now live in San Diego, California, happily married. We always think back, that we know God is the reason why we met in the first place. Looking back we were so opposite, but He made it happened.

My husband would not have been anyone that I would picked had I seen him in a crowd. I was always looking for the athletic type of personality. We had so much in common but also many opposites of what we enjoyed doing. I was more of the outdoors type, and he was not. I know my plans are not God's plan.

I'm glad ChristianCafe.com brought us together. Being the bride of Christ while we're still single is the best thing to do while we both are waiting for the right person to come along. And thanks to ChristianCafe.com for bringing us together - we couldn't have done it without you.

It was definitely a match that God had planned for us to be together. As Jeremiah 29:11 says "For I know the plans I have for you", declares the Lord, "plans to prosper you and not to harm you, plans to give you hope and a future."

I live in the western part of Romania and 7 years ago I met my husband on ChristianCafe.com. 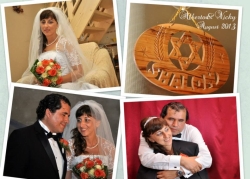 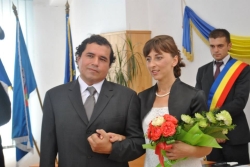 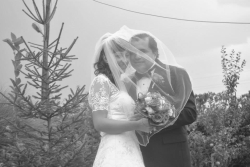 Alberto and Vicky on their wedding day

It is a nice fairy tale story and it is not finished yet. Alberto my husband is American and was a paying member at that time; I was not. He wrote me with a strong desire to know me, but also had a divine confidence that I was the one he was waiting for over 40 years of his life.

I was not interested in him because of the picture and the age difference, but he mentioned a missionary's name I knew so that's how we started to write. He wrote things on his profile that made me think he was a spiritual man who is interested in saving souls for the Lord. I had prayed for such a man.

Then I started asking him more about his beliefs because to me being equally yoked meant having the same direction in beliefs. We started having feelings and then we prayed for direction from God.

After three days of no emailing and fasting we knew God wanted us to go forward with this relationship. Economical crises came and it affected my husband so much financially being in real estate. After 3 and a half years we finally met. It was God's assurance that we were made for each other.

He left Romania with the desire to get ready for the wedding but we encountered some serious problems. On his citizenship certificate was a mistake issued by the American government: they added the letter o to his middle name and it was different than his birth certificate. We waited three years to find a way to have documents ready for our civil marriage in Romania.

On the 9th of August 2013 we got married civilly and in next day we had our religious wedding. After two weeks he went back to USA and he applied for me to come. All this will take about a year so after 8 years of waiting, Lord willing, I will be with my husband.

I wanted to say it is God's mercy and love which brought us together and he used ChristianCafe.com to make it possible. I am attaching some pictures so you can see it yourselves. Thank you very much and may God bless you.

Thank God for ChristianCafe.com. God has blessed me with a wonderful husband through the use of this service.

My husband and I knew we were the one for each other after lengthy conversations and sharing about beliefs and goals and other things that were important to us. We are truly blessed. The LORD has joined two happy people.

Glory to God for a chance to meet and get to know someone this way without the outside pressures and temptations of dating in person only to discover you are not a match. My husband and I knew we were 'the one' for each other after long conversations and sharing.