I joined ChristianCafe.com in 2006 and met really nice guys. 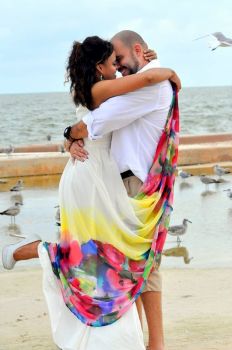 One in particular, Ian, sent me a "wink". In 2007 he flew to my country twice, the second visit he took a sabbatical to see if things could really work out. It was a struggle and sad to say, we were young and immature and were not ready for marriage... but remained friends from a distance. We both had issues to work through.

During that period we both moved on with our lives. I almost got married to someone else but turned down the engagement as I had much doubt with him, and premarital counseling brought out so many issues that would definitely create huge problems in marriage. I was hurt along the way.

What I didn't realize was that I was on a quest to find the right person and the entire time Ian was the one waiting on me, praying that I would wait and choose him. He literally waited eight years until I finally said I'll give it another shot, in 2014.

God had destined that wink of which he could have chosen from the thousands of women worldwide on ChristianCafe.com, Ian chose me in 2007. The Lord kept us throughout the years and on August 1, 2015, Ian and I will say "I Do" on the Beaches of my country, Belize.

Thank you ChristianCafe.com for creating such a lovely platform and in opening avenues globally yet narrowing the search to the right person God had in store for me.

We met 10 years ago in January 2005 on ChristianCafe.com.

Being nervous I sent a message to a handsome cowboy, when I saw his picture and bio. This meeting was planned of God for so many reasons; besides God, we had few things in common. Being shy, I did not know how to upload a picture and he rarely looked at bios without pictures.

Over the next few weeks of getting to know each other and talks on the phone we met. This outgoing divorced 6' 4" cowboy with two teenage children that ran several ranches for a prominent family in Texas met a shy divorced lady 5'6", that worked for a Community College and had two daughters from a smaller town 70 miles away. By April 2005, we were engaged and married that October 2005.

God has blessed us with a life of service as Chaplains together for a Hospital, Boy Scout troop and with fellow Chaplains beginning a Chapter of Chaplains for Peace Officers. We both were older and divorced looking for the one God was sending to us and we found our match in each other on this site.

I'd like to announce that Carol was married to Joseph on April 5, 2015.

The honeymoon was enjoyable also.

have met someone on ChristianCafe.com

and we have been happily married for 8 years now.

It's very comfortable to use and the design is perfect.

I have met someone online and I no longer need ChristianCafe.com.

Thank you very much. When I contacted Graig and received his first email back I fell deep inside his words. By coincidence we both are divorced for 15 years and we have a lot in common. He is based in USA and me in UK.

We are dating, praying and planning a future together. I believe I have found my soul mate. Thank you ChristianCafe.com.