The Lord has truly given me the desires of my heart! 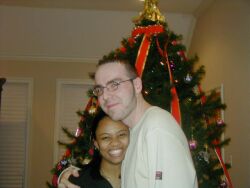 Asia can hardly contain herself after meeting Jeremy!

I would like to thank you for creating such a wonderful site for Christian singles. I am now engaged in holy courtship with a God-fearing young man, Jeremy!

Jeremy & I met the 14th of October. We sent messages, and phoned each other for 2 months; we shared testimonies, read passages of scripture, we have become accountability partners.

I fell in love with Jeremy's spirit: he exemplifies such Godly character! The Lord began to speak to the both of us in prayer concerning holy courtship.

Jeremy, residing in Buffalo, NY and I, in Memphis, TN were blessed to meet face-to-face on the 21st of December. I already knew so much about him through daily conversation & prayer. I have taken 2 trips to Buffalo since our 1st encounter: 21st of January & 14th of February.

The Lord brought two of His children together in due season through ChristianCafe.com! Jeremy & I are now seeking Him for further direction concerning holy matrimony!

What a perfect gift the Lord has given us, each other, for loving Him with our whole heart (Matthew 6:33). Jesus we love You & ChristianCafe.com we thank you for your work in the kingdom.

Thanks a million for developing a terrific site!

My experience overall has been extremely positive. I was lucky enough to meet someone that I really connected with right from the beginning.

Gesner is in the Caribbean right now but he will visit me this spring, by coming to the U.S. for the first time. We have declared our love to each other and we are enjoying our opportunity to grow closer each day.

Because of your site our two worlds have collided for the better...the chances of that occurring without ChristianCafe.com are close to none! Good Luck and God Bless You All,

Your site is great!

I've met two amazing young women which I am thankful to have met and glad to call my friends. My testimonial, unfortunately has nothing to do with your wonderful site.

I just had the divine opportunity to lead three of my junior high students to Christ, and I'm so buzzed that I want to tell as many people as possible, so please, even though this does not directly compliment your site, please post this as a testimonial! THANK YOU!

I want to send my congratulations and blessings to ChristianCafe.com and wish the best for all the people that enter the Cafe.

I want to bless also the personnel who God puts the idea to do this splendid site.

I met a nice man. I thought this would be difficult for me. We have nothing yet but we have known each other for about 5 months and we are discovering many things about us that each day seems to be that we match.

He called me in December and I love his voice. I wish that God will give us the opportunity to meet each other. I know he will do so because we are His sons and He loves us too much.

I really don't want to meet another guy. I think I am falling in love with him.

I have great news to tell ChristianCafe.com

I just found my wife using this great service. After dating Melinda for one week (I know this sounds kind of short), I proposed to her.

We're getting married at the end of March. We're both very happy and I want to tell everybody ChristianCafe.com is awesome.

I met some very nice Christian girls using this service, and I finally met my wife. I'm very happy how God works throughout all aspects of life, even the internet.

I also wanted to ask you to cancel my membership because I won't need it any longer. My single life is over. God has given me a woman who is smart, pretty, elegant, and committed to our Lord and Savior Jesus Christ.

She is one of a kind. And fortunately, she wasn't too far away. I'm so very happy about God putting it in my heart to use ChristianCafe.com. Melinda stated that she really didn't ever see herself placing her profile on the internet, but felt a calling when someone at her church gave her an ad.

Thankfully she placed her profile up and I saw the profile of my wife to be. May God richly bless ChristianCafe.com. Yours In Christ,

Some months ago a close friend of mine suggested that I should try your site. Not long after I signed on I noticed this lovely young woman in Amsterdam, Holland.

She said she was just interested in a pen pal relationship, and I thought that was fine as I didn't believe that a long distance relationship would work. Well, I was wrong.

It turns out that she was from Scotland, and our letters became more frequent and more personal. I became infatuated with her and anxious to hear her voice.

The letters continued and phone calls almost every day. Soon, I arranged to visit her in Holland for a week's holiday. She was as wonderful in person as she was through her letters and on the phone.

She felt the same about me, and we fell in love. Shortly after my return to the States, she followed for another holiday of her own. Shortly after her arrival and before our busy trip to Disney World with her nineteen month old son, and my ten year old daughter, I proposed to her and she accepted.

She will be moving here in a month, and a few months from now we will be married.

Another happy ending for Christian Cafe! Thank you for your help and for being there for me. God Bless this site, and tell others that dreams can come true, and not to give up looking for the woman or man of your dreams.

All I can say is WOW!

God indeed works in mysterious ways. Through ChristianCafe.com I have seen firsthand in my own life how romantic our God is, and how much of a sense of humor He has!

I have met the most wonderful man through ChristianCafe.com and I believe we are going to be partners for a long time. :) It's amazing how much we have in common and even more amazing how God's timing works.

So I won't be renewing my membership here! I found the man I've been praying for all this time.