I am a Canadian who joined ChristianCafe.com December 2014 seeking a lady who was similar to myself. 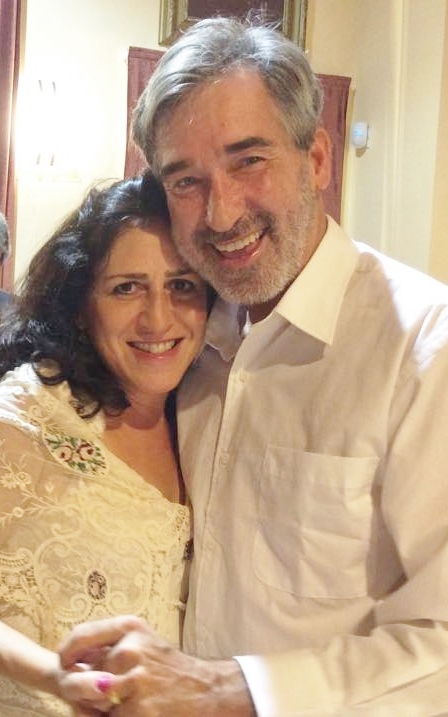 Greg and Amy on their wedding day in Cyprus

Within days I connected with a lady who lived in Israel. We became very interested in each other and before I knew it, we started to become best friends.

We lived 6000 miles apart and spoke daily and the intensity grew. Video connection then became the norm and we evolved virtually for the next 3 months.

We met in person for the first time near the half-way point between our 2 countries. The physical was better than the virtual and we met again 4 1/2 months later in Canada and then again 8 days later in Florida. And then we were flying from New York to Tel Aviv together. We were engaged!

Our story is one that seems to be storybook, yet we both know that it is the hand of God who has worked throughout our relationship and brought us into a new and wonderful time in our lives. We are working together and promoting the scriptures daily through my wife's art. We pray, live, love, and laugh! Thanks ChristianCafe.com for your site.

Eddie and I celebrated our 15th wedding anniversary.

We met on ChristianCafe.com in late summer of 1999. After chatting then talking by phone for 4 months Eddie flew to Florida Jan 10th 2000 to meet me. We were married July 22nd 2000. It has been a truly wonderful God-honoring marriage. We laugh and pray together every day. I know God orchestrated our meeting. He knew we needed each other.

I would like to thank you again for connecting my husband and I!

We have been married for nearly 6 years!!

Last week our local radio station BBC Radio Devon in the UK ran a week of talks and phone ins about finding love in later life. I was on the morning show and mentioned ChristianCafe.com!! Many local people heard me and know how happy I've been since we have been together! Thank you!

Thought you might like to hear a testimony that it works! God is at the centre! Amen!

I want to thank you for helping me find someone who knows the Lord, is true and honest.

I have asked her to marry me and for the Lord to bless us. Would you please remove me from this site.

I was on ChristianCafe.com and was in the process of non-renewing last year but then I met someone briefly on your site who was also in the same situation.

She lived in Asia but worked for an International Insurance Co. out of the Singapore area. She visited my area in the USA once last year and we met as Christian friends. We've both been divorced once, not by choice, as both our spouses developed extra marital affairs and we experienced that trauma and hurt.

She had to go back of course to the Singapore area but we have kept in touch as Christian friends and lately have decided that more than that has been happening and we communicate live now through messenger and we have decided to commit to one another and see how we can make plans for marriage and relocation, etc.

It didn't happen overnight and I actually had decided against a foreign relationship but somehow, step by step, it all worked out despite a time when we thought it impractical to keep pursuing our friendship due to distance but we seemed to "click" and of course had a rapport in Christ/Christianity and things just developed.

I tried many attempts previously to reconcile with my wife to keep my Christian marriage vows but she felt she did not want to do that and wanted to remain single. We forgave each other our shortcomings and are friends to this day and/but have moved on with our lives. When you don't forgive you only poison yourself and not the other person.

Anyway, I wanted to drop you guys a line to let you know that just at the time of leaving ChristianCafe.com I met this very wonderful Chinese Christian and slowly over time we seem to have found a very nice relationship with each other and are finally progressing toward marriage in the next year.

Thank you for the business you carry on as there are people out there like myself who have been affected in a beneficial way by it.

I really appreciate you, and your efforts to see that this website is running well.

May the Lord bless you with every spiritual blessing in heavenly places.

I am excited to inform you I have connected through ChristianCafe.com with the woman that seems to be God's choice for me.

We have really connected & I will be visiting Canada on Thanksgiving weekend to spend our first time together. This will be a success story for Cafe & I will be delighted that you will be made aware of it. Thanks for your ministry to us!