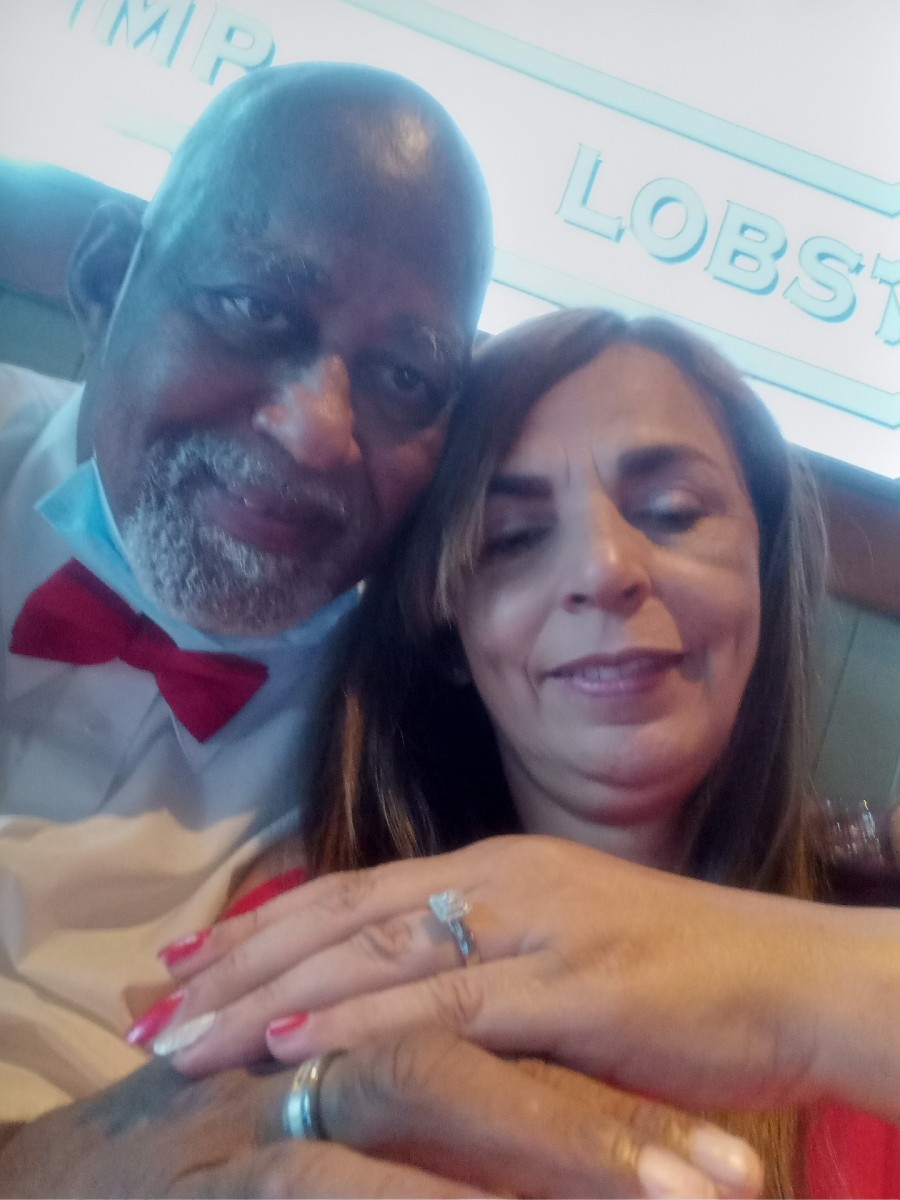 Ed and his Proverbs 31 wife, Betty, show off their rings

I was looking for a virtuous woman like the one in Proverbs 31. I thank God I found her and we got married last week.

She had been single for many years and I had been divorced for almost 4 years. We both love the Lord and engaged in daily Bible study and learn about each others culture and lifestyle.

We are so happy God brought us together through ChristianCafe.com although we each live on different continents.

I met the love of My life on ChristianCafe.com. 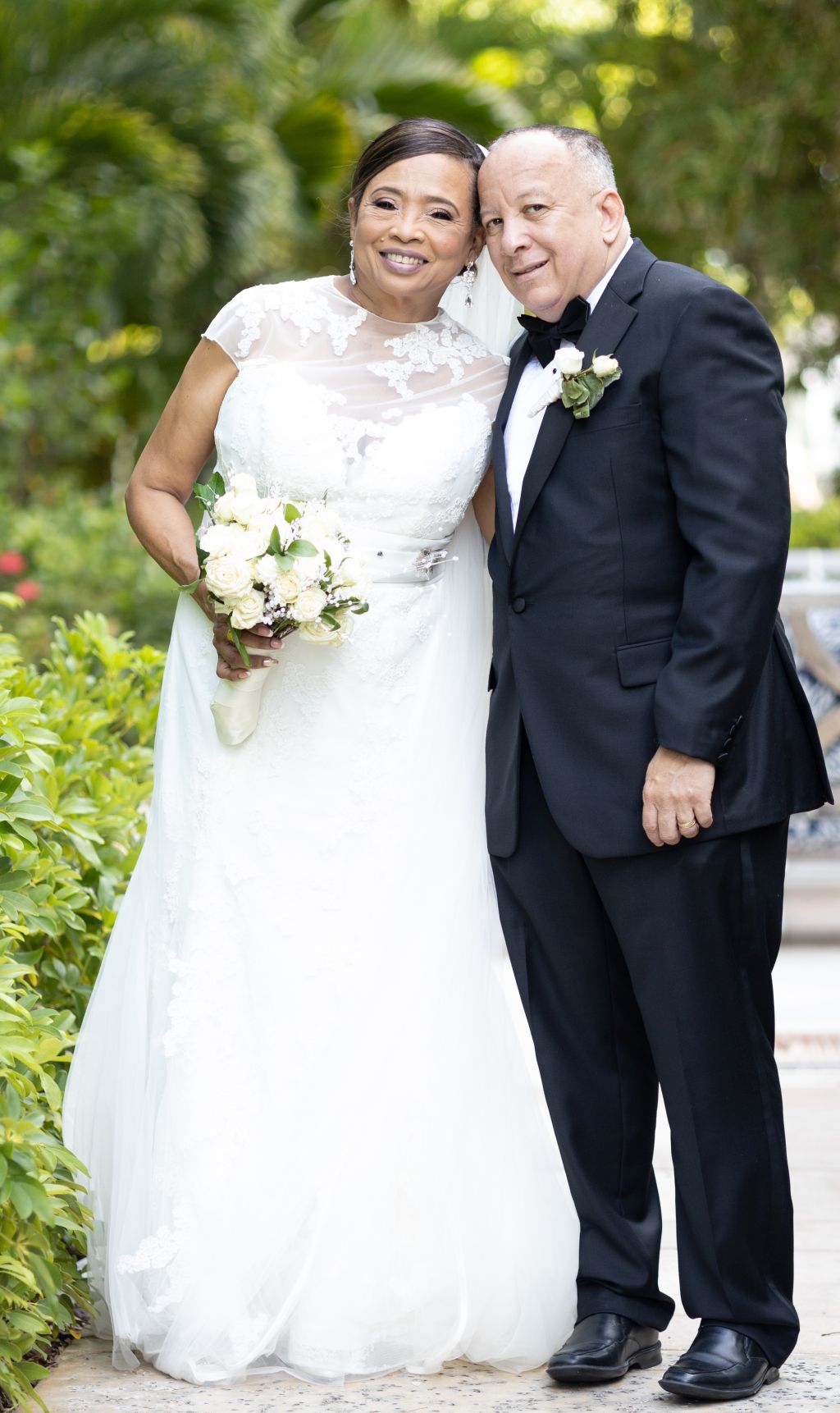 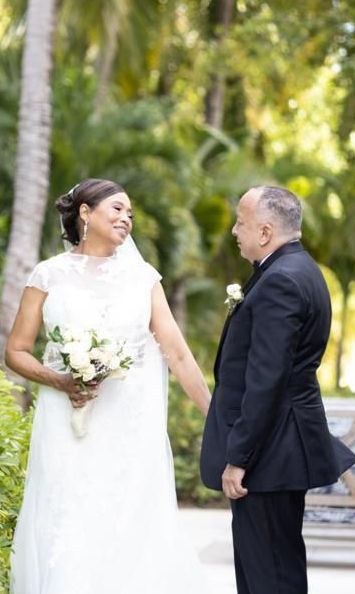 Sheryl and Robert can't keep their eyes off each other!

We met in October, dated for 9 Months, fell in love and got married June 5th 2021. Now we are happily married.

We grew up in the Brethren faith in the Bahamas. We share the following:

3. Blessed of Hope of Christ's return to receive us unto Himself

My Wife Sheryl is Wonderful, beautiful, lovely and kind. Many thanks Christian Cafe for helping me find the love of my life.

We are living happily ever after.

I will not need ChristianCafe anymore. 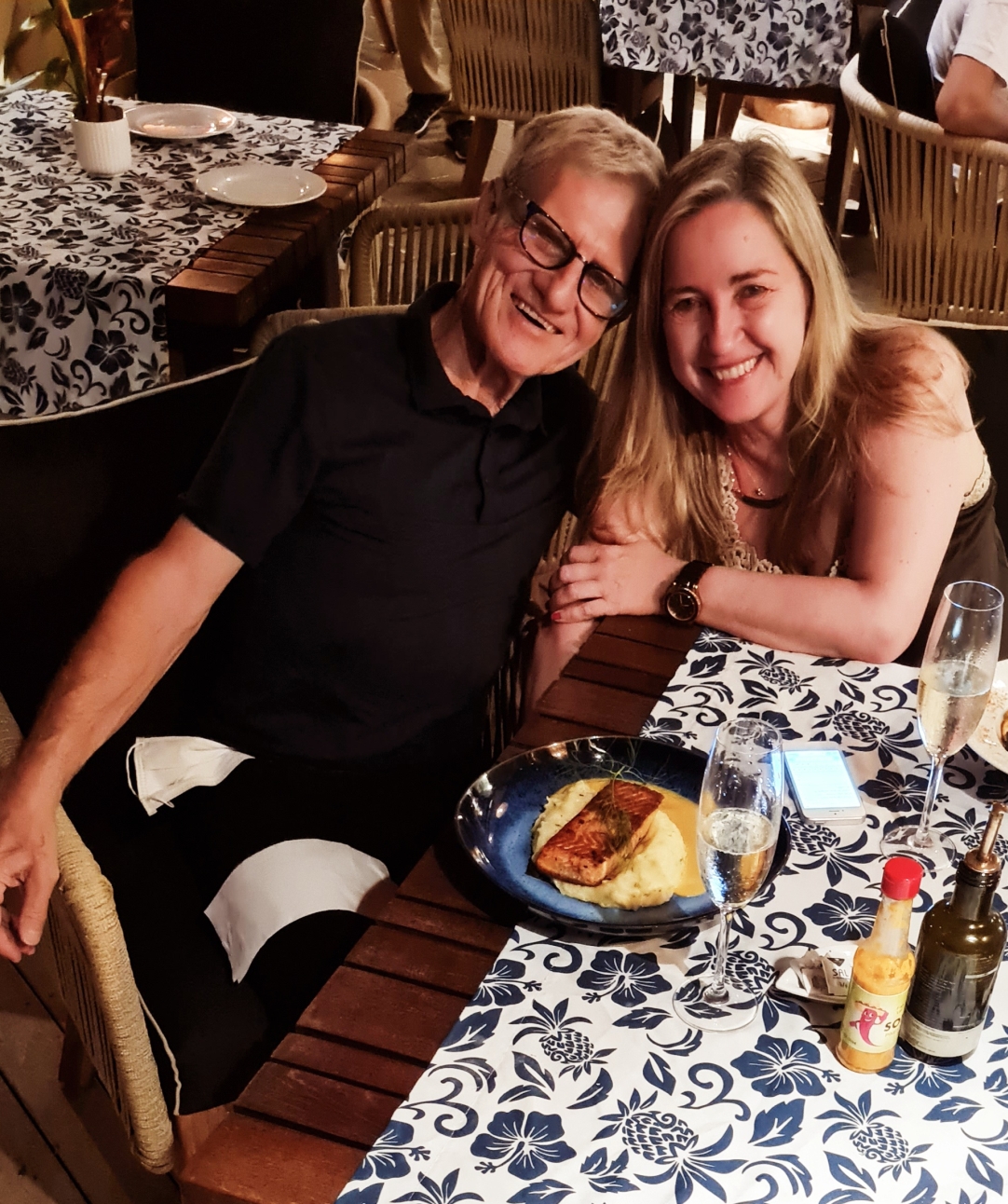 Nothing but smiles for Robert and Cybele!

I've found the love of my life on ChristianCafe.com. Cybele and I were fortunate to have met on the site.

I flew to Sao Paulo late September to meet her and a few days later we flew to an amazingly romantic resort in the Recife area. It was at the Camurim resort that she accepted my marriage proposal.

We are now engaged and will probably marry at this resort before March 2022.

Since Cybele is learning English and I am learning Portuguese, plus I am from Canada and Cybele being from Brazil, we would never have met without ChristianCafe.com.

I have only praise for ChristianCafe.com and for the amazing members. 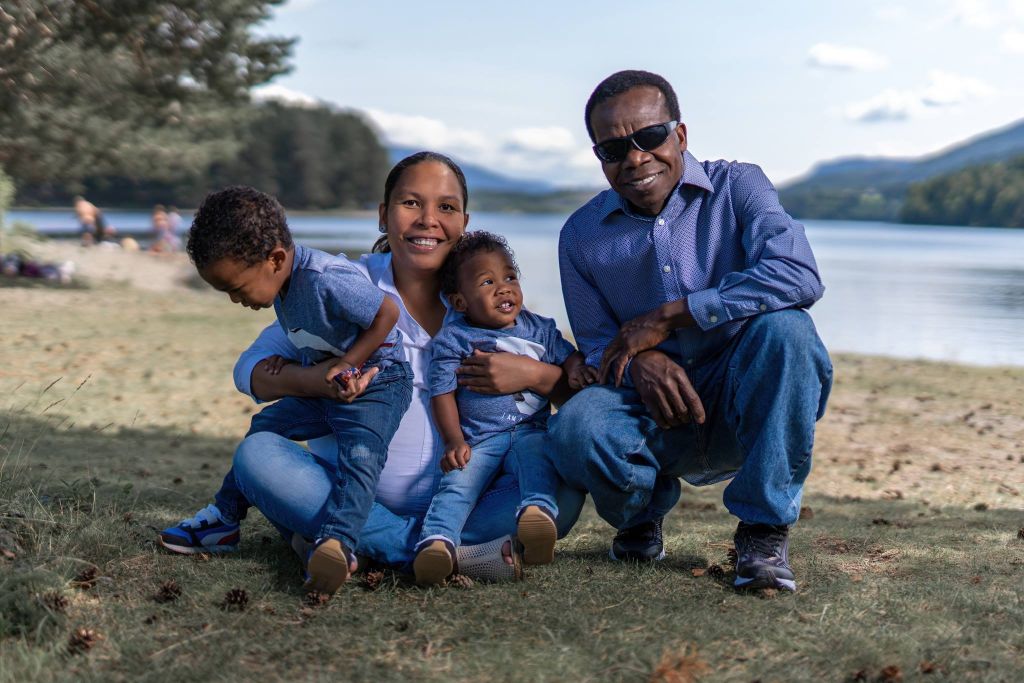 We met 13 years ago and married 2 years later in Cebu, Philippines.

Here is our latest family pic, including our 2 "Cafe Babies" :)

I value the quality of Christians I meet on ChristianCafe.com.

I have enjoyed the free membership and the opportunities have encouraged me to sign up.

ChristianCafe.com is the best site I've ever had access to.

The profile questions are excellent. Congratulations for your commitment to the truth and the Bible.

There are real people on the site and I'm now convinced of that.

It's a major relief, after being ripped off on the mainstream dating sites so many times before.

I chose ChristianCafe.com because I was desperate to find a dating site that had integrity and wasn't stealing from people.

ChristianCafe.com is the best.

ChristianCafe.com is very good, better than {other dating sites}

Those sites were complete failures, with many fake profiles and gold diggers.

ChristianCafe.com is definitely the right place for Christian contact.

I am happily surprised to find real Christian men, my age group, vs so many scammers on other sites.

I chose ChristianCafe.com to discover Christian single men to date and plan for a future long term relationship.

I did research first before making my decision and have found...

Christian Cafe has many many strong Christians and everyone is very friendly.

It's a good site - much better than the other dating sites I'm on. ChristianCafe.com has more authentic followers of Christ.

I found a boyfriend - thank you for your help.

Thank you for everything.

Our relationship has lasted over 20 years.

We carried on a correspondence for several weeks with phone calls as well, and then agreed to meet in Rochester NY on neutral ground with her friends and family.

I was able to see her at least once a month for the next year and I proposed to her. We were married on May 24th 2003 in Brockport NY.

We lived in Bermuda from 2003 until 2010 and then have lived in Rochester NY since.

We have four children under 14.

I knew that I was going to marry Jody within a couple of weeks of meeting her. We started speaking every day and had so much in common in Christ that it was easy to fall in love.

We had both been out in the world in our twenties and brought tons of baggage into the relationship together. However, we both had strong and fresh faith and when you meet someone that you find interesting that shares that faith... it is a great recipe! Then again, our marriage, while happy for the most part, was entered into with eyes wide open.

Jody had already been diagnosed with Multiple Sclerosis in 2000 and had lost her father to the same disease the year before. Her father went from diagnosis to death in about 12 years and spent the second half in a wheelchair. When I was considering asking Jody to marry me, God told me that Jody would not end up like her father.

Jody is still walking after 21 years of fighting this disease and having four children. However, the disease has not been kind and her stability and balance are severely strained now.

"Let God be true and every man a liar".

In 2017, 10 months after having our fourth child, Jody suffered the first of what would be several severe grand mal seizures. She is now heavily medicated and her quality of life is greatly diminished. I don't get to see much of the woman I married anymore and in truth what remains is a painful remnant of what used to be.

But I get to see and remember what we were able to build together in the first decade and a half of our marriage and it was good and we were happy.

I myself was diagnosed with stage 3 lung cancer in 2015 and was also miraculously cured in the middle of the night (a testimony for another time) in the same year!

However, I succumbed to pressure and my own doubt and started the treatments a month later. I have had clear scans for five years!

And then in 2020 I suffered a massive heart attack and flat lined three times on the operating table (once for ten minutes). After laying in a coma for a week and half I awoke to be told I needed to have open heart surgery to have an LVAD installed.

I am back up and living a 'normal' cyborg existence and back at work! Praise God!!!!

I stop and think of how God brought Jody and I together and through both of our pasts and support systems we have had our needs met time and time again by the Lord. If I was always destined to fight cancer and then need LVAD surgery, then I would have needed a reason to move from Bermuda to Rochester NY where I had access to the Lipson Cancer Institute and the Sands Constellation Heart Center both out of Rochester Regional Health.

My wife needed someone that would never leave her when she was at her worst and that the lord could provide for her through. As a Christian man I went into this marriage with my eyes wide open and so I will be there for her when she is at her worst.

However, I see now why marriages that have one spouse diagnosed with MS have a 75% failure rate. Like cancer, MS is an insidious disease. God has allowed the cancer and the heart failure to help me see what it is like to be given a death sentence diagnosis.

Yet God would also not allow them to destroy us so that our marriage could bring glory to him by reconciling at all times that which has been taken from us by the enemy. God is so good.

My advice for those looking for marriage is to let God write your love affair.

Pray that you are ready to be what your future spouse needs and not to get what you want. You will have the perfect picture of the perfect spouse when you meet and marry someone.

Work on friendship in the beginning and learn to be just friends. It will be all that is left when life has taken its toll on your bodies and minds.

But most importantly, invite Jesus Christ into your home at all times together and never cease praying together. I confess one major failing of mine is that as I began to lose the mind of my spouse I lost the desire to pray with her and that has hurt us more than any of the health issues we have suffered.

Give Jesus the glory because the Word says in Philippians 4:19 "But my God shall supply all your need according to his riches in glory by Christ Jesus."