So happy God writes epic love stories. I'm happy to be a main character in one of them :) 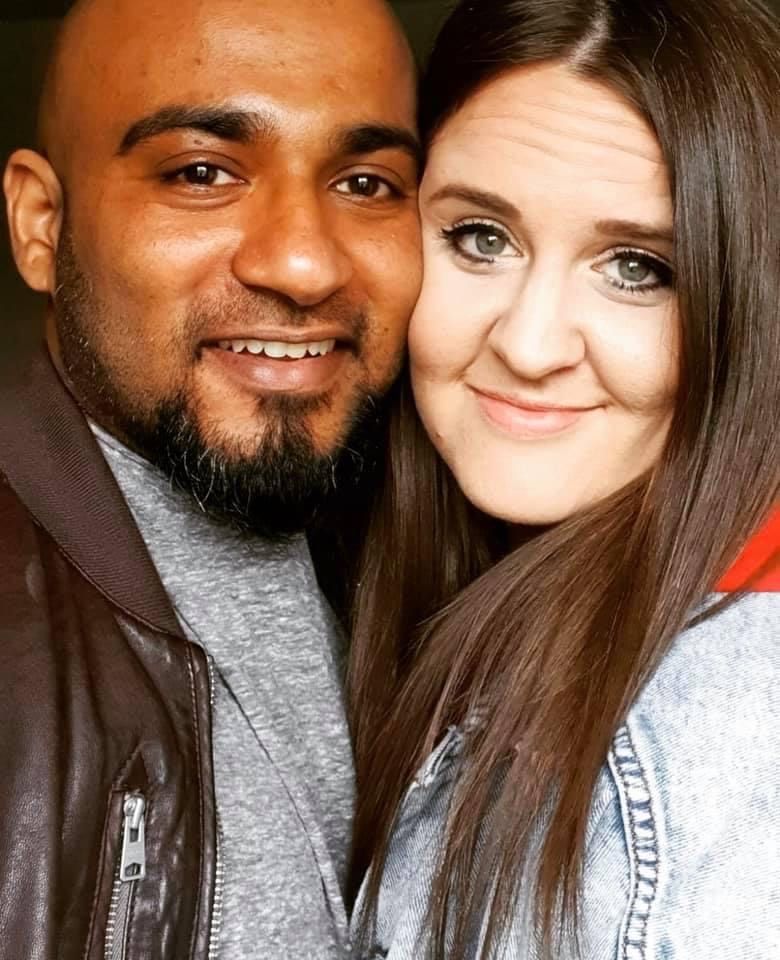 Don't Bobbie and Tandi look so happy together! 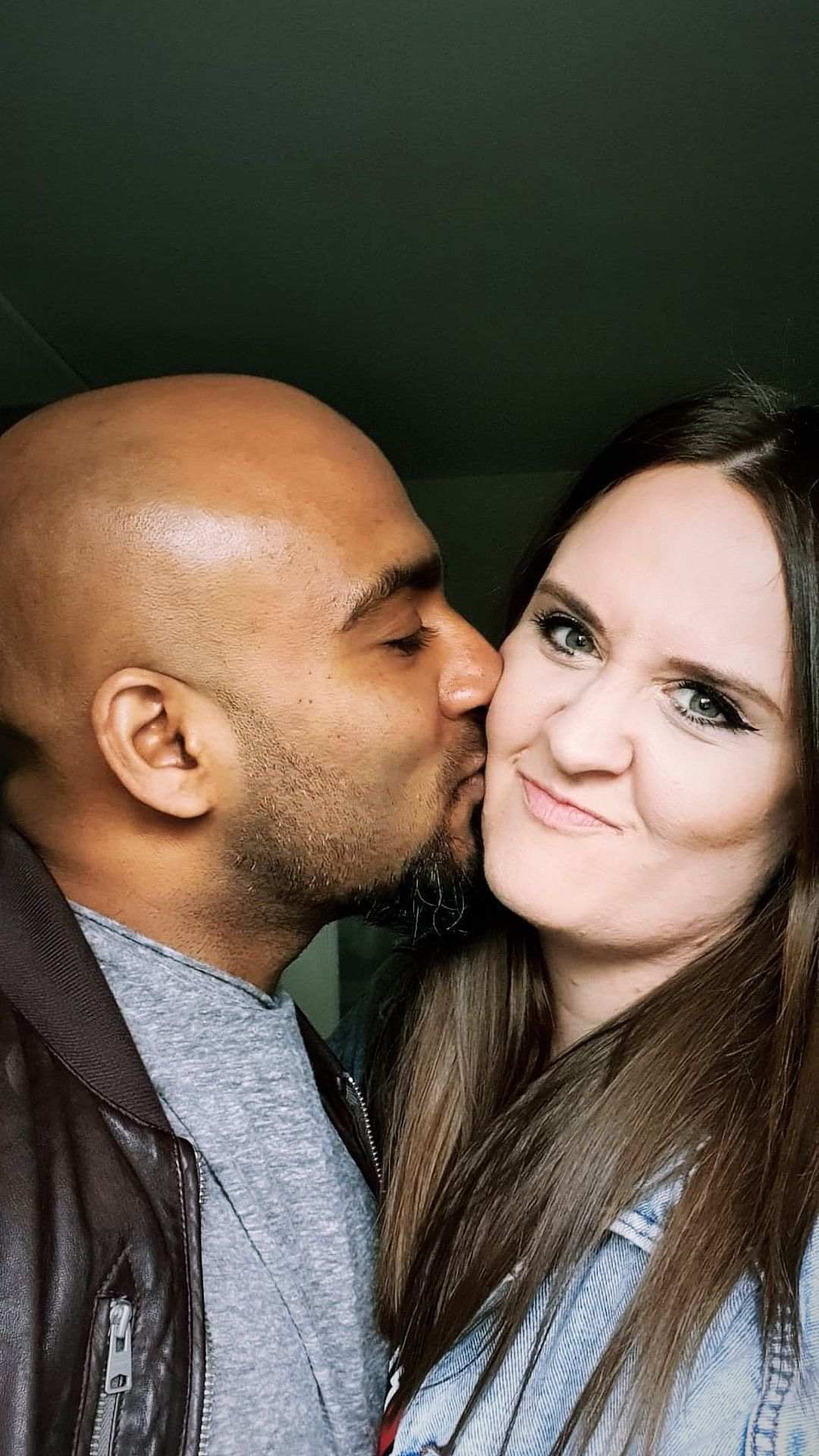 Bobbie and Tandi so in love :) 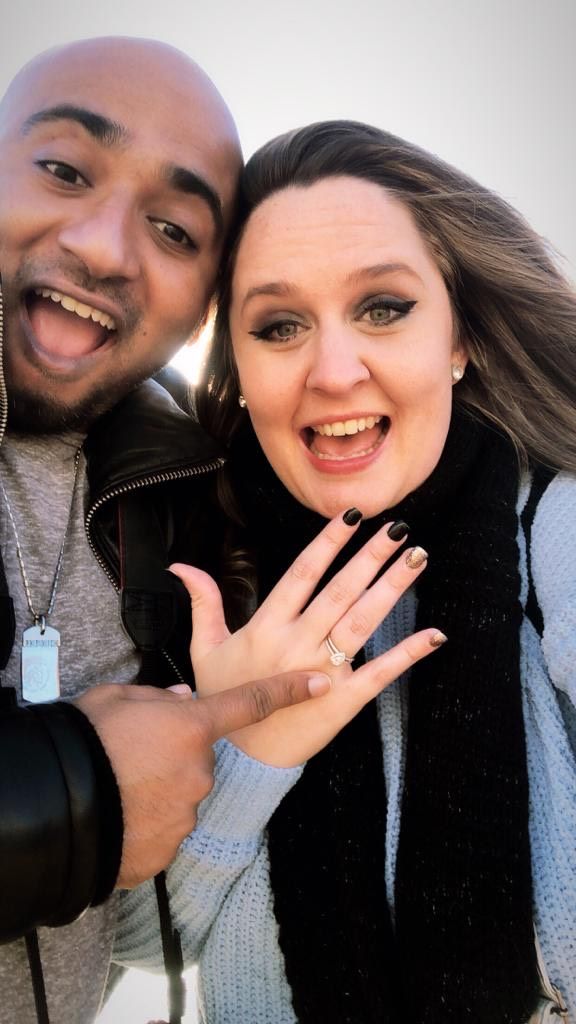 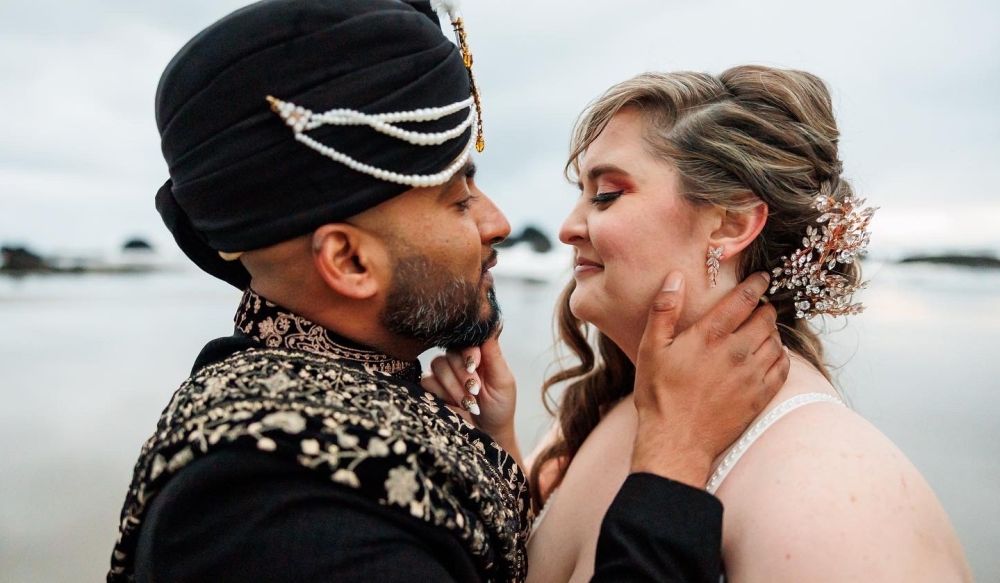 Tender moments at the wedding 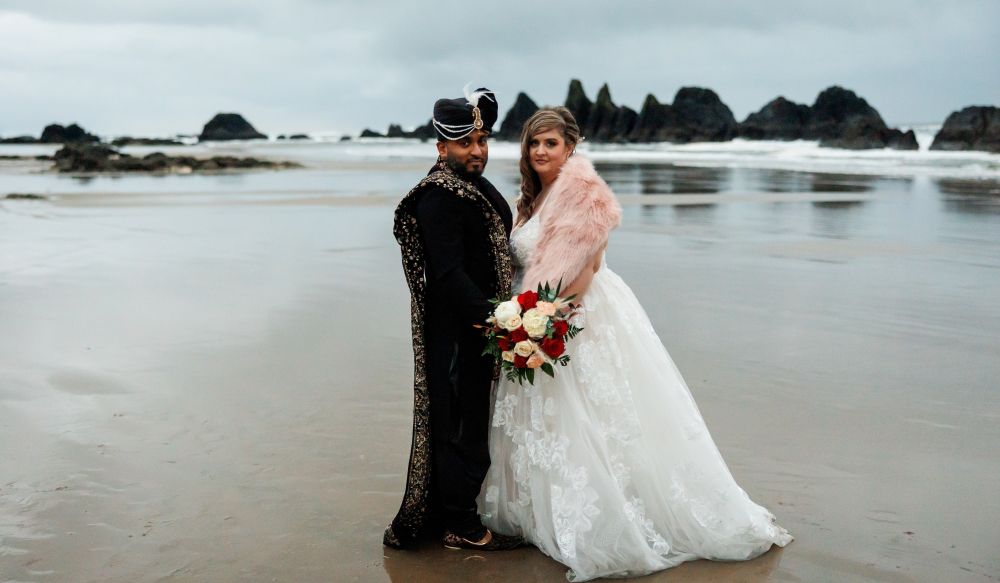 Aren't beach weddings the most romantic! 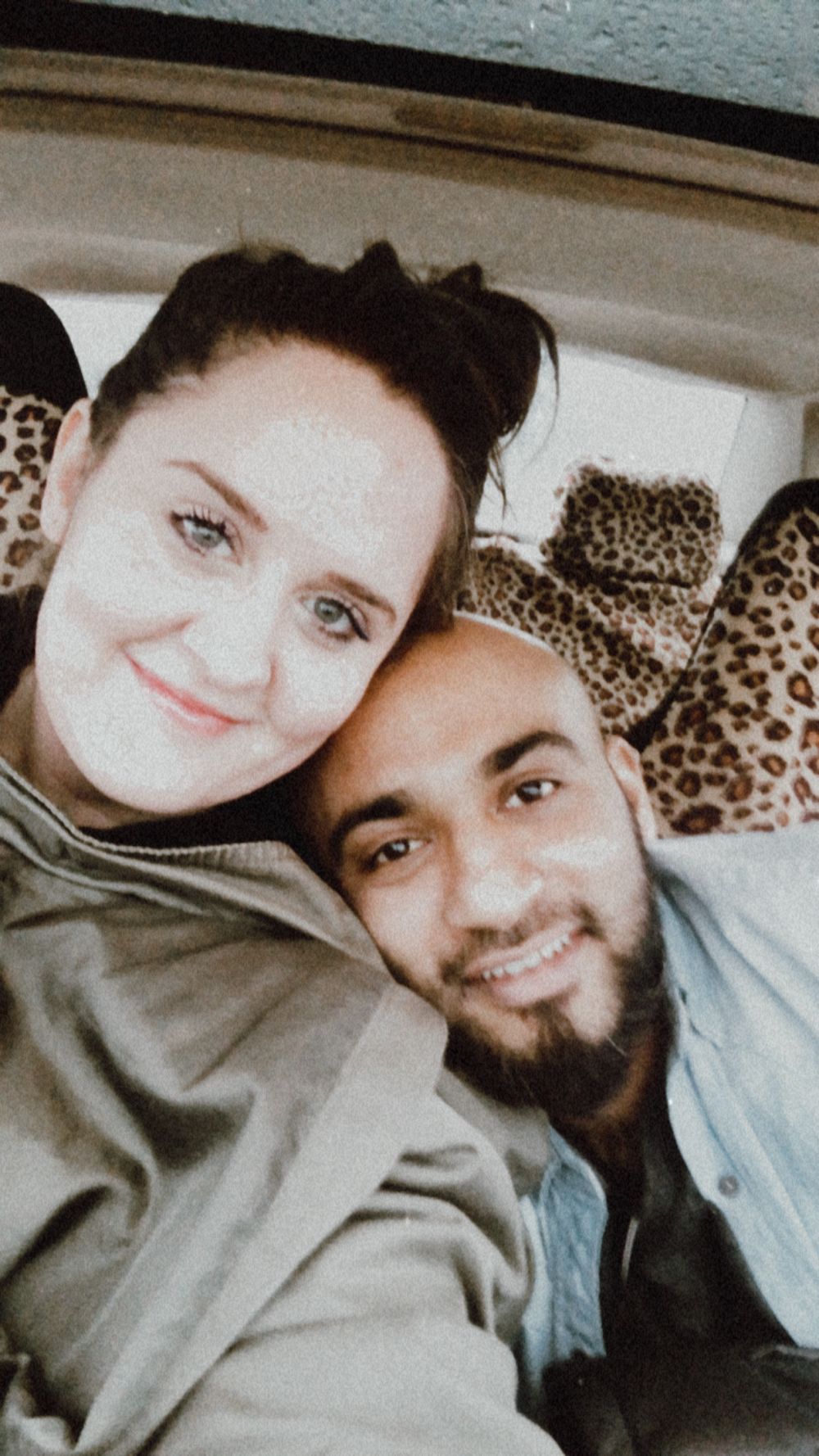 Sooo happy to be together at last :)

I'm an American and my husband is Indian. Between COVID hitting right after we met online and immigration, we finally got married two years after meeting.

God was definitely in the middle of the whole thing. So crazy.

I think I came across Bobby's profile on January 15th, 2020. I winked at him :) He immediately sent me like 5 separate emails!

So we began chatting more and more and after I think a week he was sold on me. I wasn't fully sold because I've had a few long distance relationships and this would be the furthest relationship I would be in if I chose to do it.

I remember telling Bobby after he explained he was wanting to pursue a relationship with me that I wouldn't move forward until we met. He was in London, England by the way and I was in California.

So I was pretty bold to say that to him. He was even bolder to make the decision to get a visitor visa two weeks after that first wink was sent! He was approved for the tourist visa and came to visit 3 weeks after that.

So I think our timeline was 6 weeks after meeting on Christian Cafe he flew to see me. I remember the entire process of our relationship was so peaceful.

I remember asking God like why are there no red flags with this man. Most of my relationships were horrible and full of red flags I ignored so this particular man was the most peaceful man and it was funny to experience the peace and be like "is something wrong? This feels weird that nothing feels unsettling about this."

The peace is was kept me in line and kept my heart safe. Not rushing into anything but letting this man pursue me. It was beautiful.

And the timing was IMPECCABLE! He literally flew back home after being with me for two weeks, and the day he flew back, they closed international travel two days later due to COVID.

I often think about how God had us meet and actually meet in person all before the world blew up with COVID. That was a miracle in itself.

We spent months and months apart because of the pandemic and it honestly was so hard to walk through this process of separation and failed meeting up attempts.

But somehow we just kept giving it to God over and over again. And through the process of waiting for each other God grew us in ways that I don't know if we would have grown had we had been in the same town the whole relationship.

Being separated most of the relationship caused our trust in God to grow a lot. It was so painful and honestly I personally was so angry at God throughout it. Like "You bring me this man and I can't even have him? WHYYYY?" Lol.

After that March meeting we decided to start the immigration process of the K1 Fiance visa in July of 2020. We weren't engaged officially at that time but we knew we wanted to progress.

I went to England for two weeks to be with him in December of 2020; just being able to travel then without hiccups was crazy. I literally was there when the Delta Variant started in England and more travel restrictions came into place right after I got there.

Little windows of time that God opened for us we're miraculous every time it seemed.

That December vacation, we spent special time together. Bobby proposed to me on December 23, 2020.

After I got back home the next year of our lives and our relationship was the TOUGHEST part. We found out our petition for our visa was approved, which means they deemed our relationship valid and then next part of the process was the US immigration sending our petition to the London US Embassy where Bobby would eventually interview and then come here. BUT if only it was that smooth lol.

Our petition was approved in Feb 2021. We thought this meant that Bobby would be here in April or May of 2021. But no. We found out, kind of accidentally that the US embassy in London was still closed from the pandemic and had been closed since March of 2020, thus halting all but emergency immigration situations.

We were so disappointed and frustrated. So hurt and mad at God like why is this happening. We had no control over the situation.

I mean the scariest part was all the backlog in front of us from a year of being closed. We actually joined two different group lawsuits after we heard success stories of people doing this. Because basically what the embassy was doing was illegal. Anyway, so many details I'll leave because it's already a lot.

Our relationship was hurt on commitment and God's timing and our trust in Him and in each other. We had several setbacks through the next ten months of waiting, like painful ones, but Bobby FINALLY had his interview in November 2021 and moved here at the end of that month.

We were married two weeks after that. Even the wedding itself was planned in faith because we had no idea for sure if it would happen.

My family flew from Zimbabwe, and Texas and Canada for the wedding, like they all planned to come and had faith with us that it would happen. And it did.

God came through time and time again and it definitely didn't always look of feel like He was in the middle of our love story but looking back, His faithfulness sustained us.

Our love for each other is special because of this process. I trust my husband and he trusts me. We love each other and because of what we went through I feel like we could go through anything and it would be fine.

We are currently still doing immigration stuff haha. Bobbie has applied for his Green card and all that and wiring for his work authorization. At least we are together for the rest of the immigration process.

We are adjusting to marriage and just being around each other. It's been fun and weird.

But I'm so in love with him.

I refer people to Christian Cafe all the time :)

I found the most amazing woman! 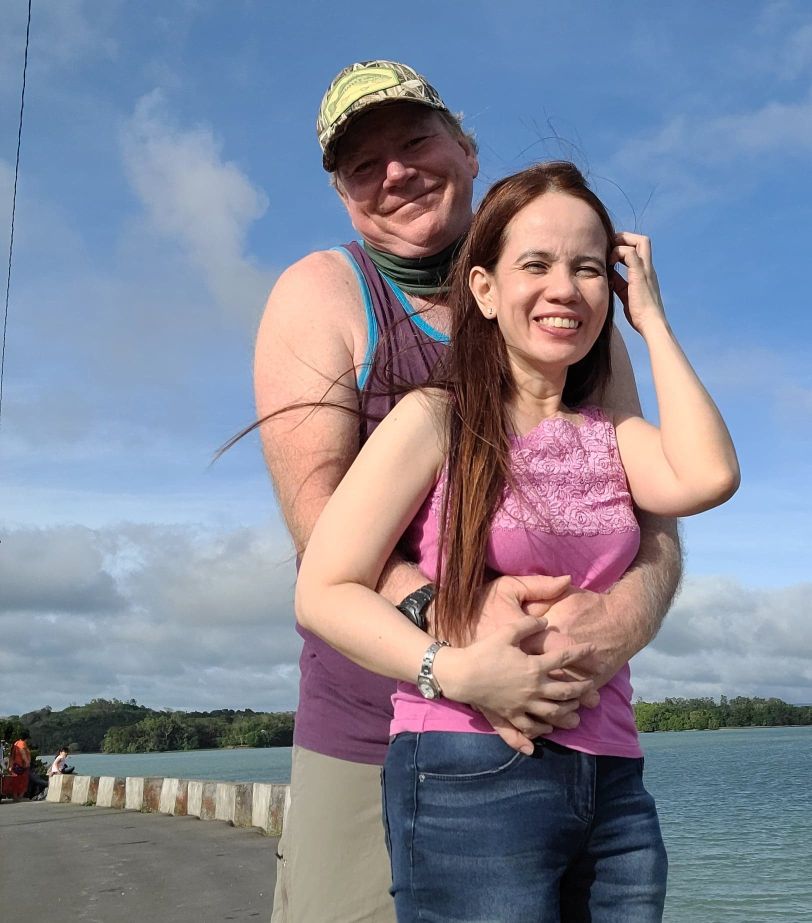 Brian's not letting go of Kitchie! 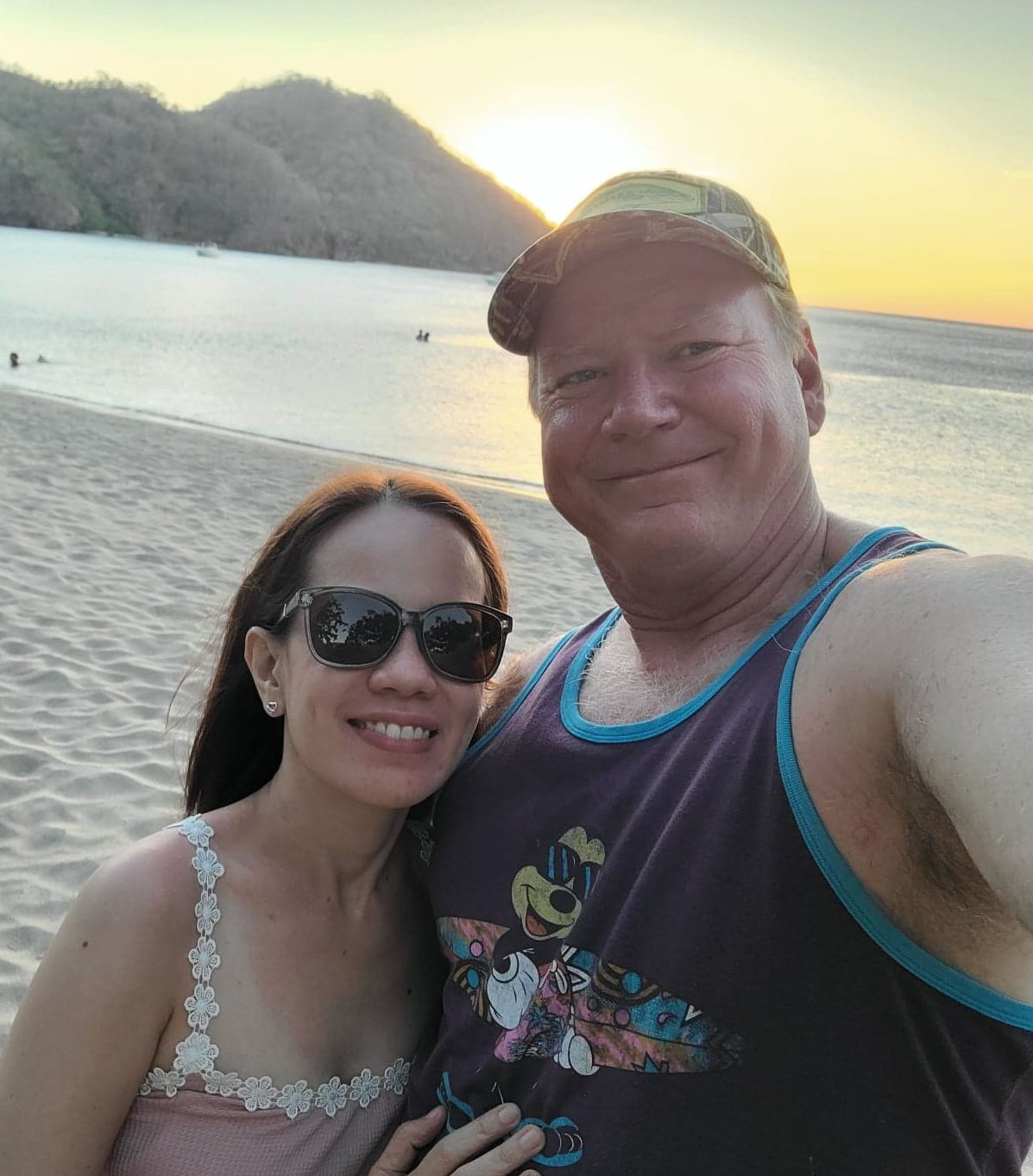 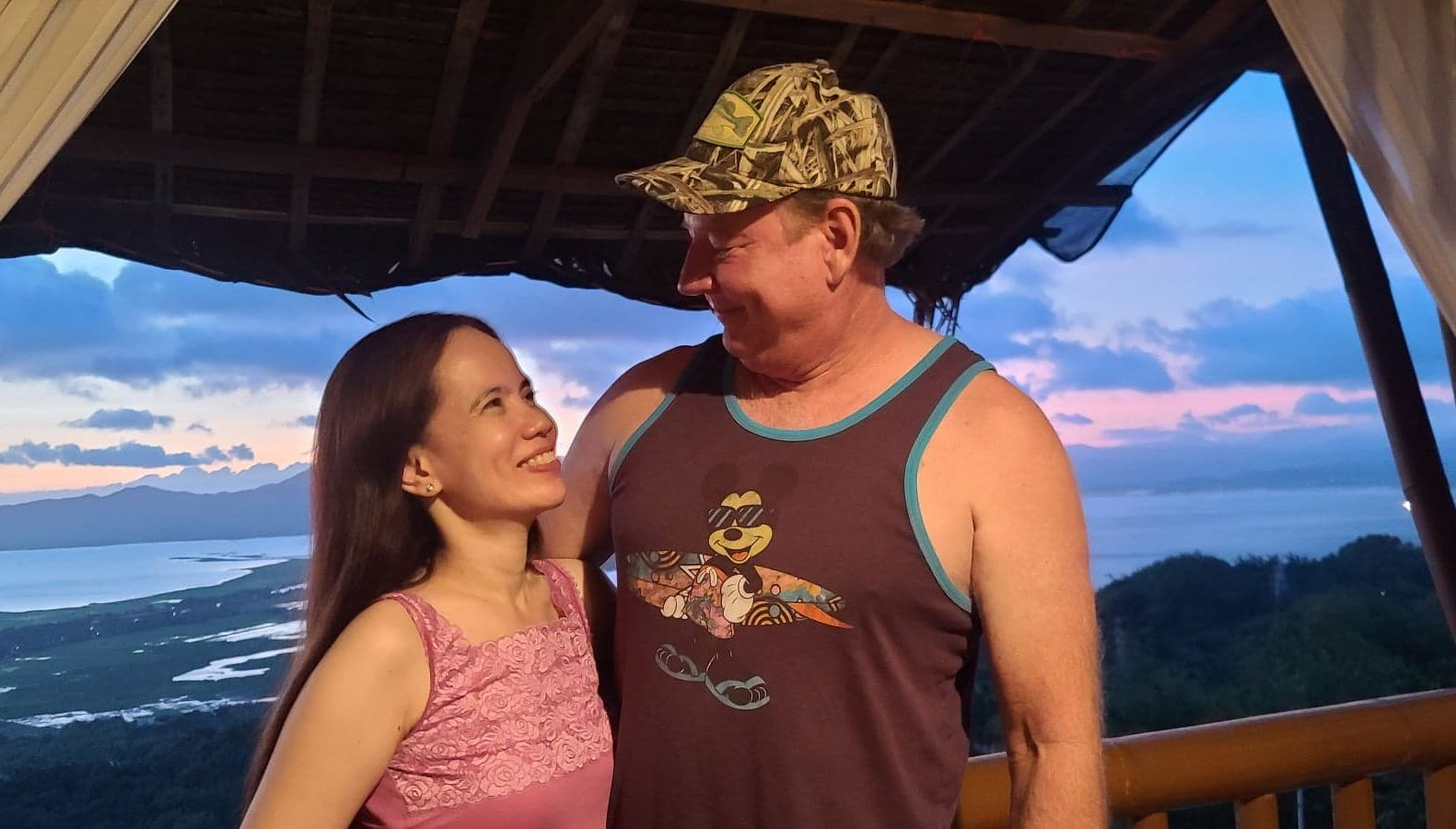 Brian and Kitchie only have eyes for each other 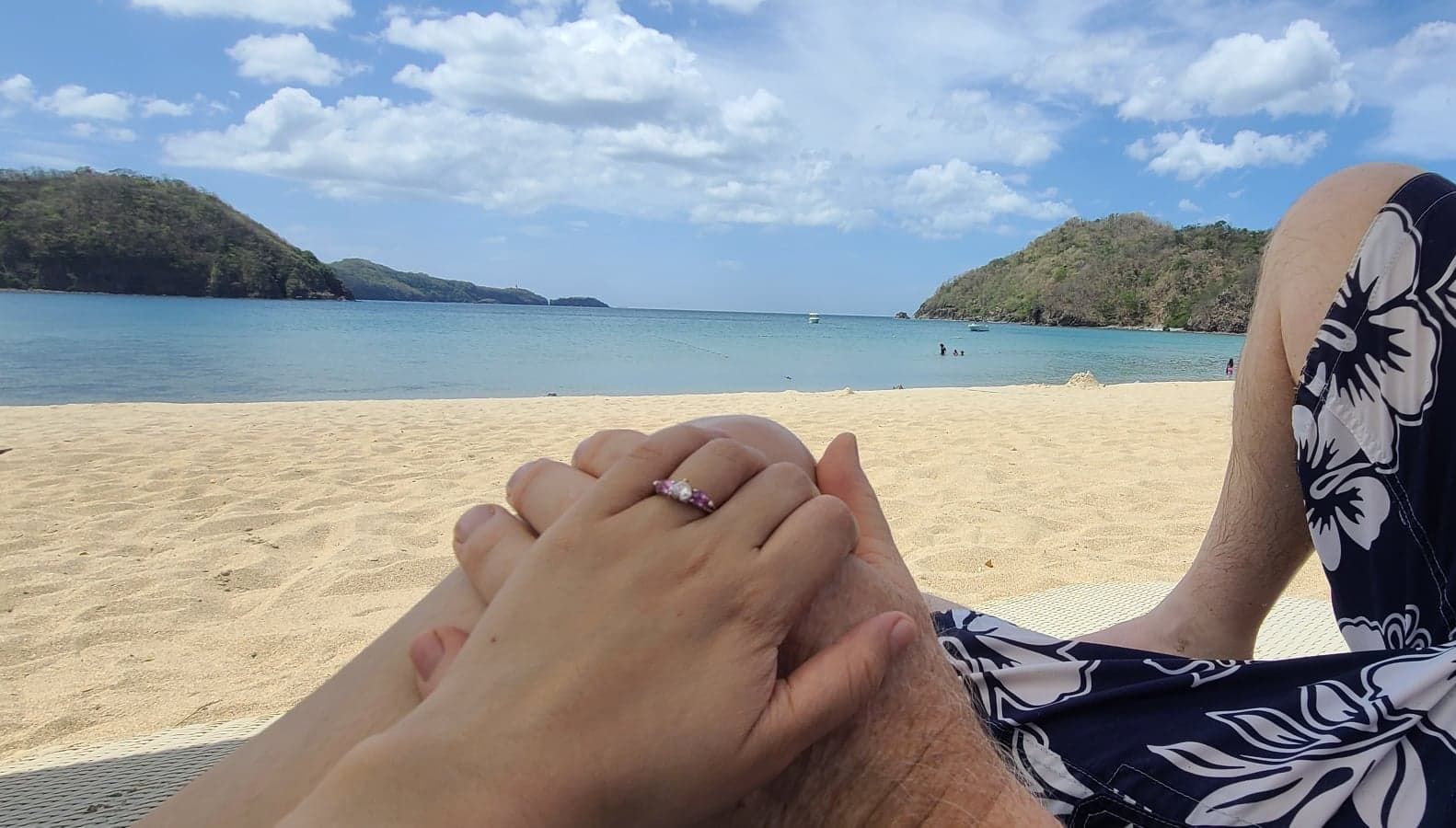 Thank you for bringing us together.

Every prayer answered every time. God is Good!

Yes it's it's been an amazing experience blessings everywhere we turn everything has been made so easy for us.

Things that even the government usually makes extremely difficult were done very quickly and very easily.

Wedding is set for May 27th in the Philippines.

I met Grace on Christian Cafe!!!

May God save and bless you, your family, and loved ones, in the name of Jesus, who died for our sins, was buried and rose from the dead!!!

So far it's been great!

I tried Christian Mingle for approx 10-20hours over a 7-10 day period. I got more value in 1 hour on Christian Cafe, for free, with the quality of connections, than I did over there investing for 6 months.

I am a fan and just signed up for paid the paid program. Looking forward to seeing what ETERNAL connections I can build.

Prior to joining, I searched top dating apps and Christian Cafe came up high in ranking.

I have looked at other dating sites B4 now & just had not seen any men who interested me.

BUT, I did see a couple of men here on Christian Cafe, whom I thought were handsome, so I joined Happily!

It helped me think in a different state of mind, to keep up with finding the man I desire.

I chose to join Christian Cafe because I Want a Christian partner who believes in God, Jesus, who has morals & loves everything about life's journey, living in positivity, enjoying the ride!

My wife and I met via your site about 20 years ago.

In our part of the Midwest, in 2002, it wasn't exactly desirable to point out you had met on the internet. These days, I have no problem saying we met online, but back in the day, it wasn't something to be proud of. Let's face it, we were still using dial up. It was a long time ago.

Lots of layers to how things unfolded, but with a 500 mile drive separating us, God provided through a friend of mine who offered standby flights through his airline job.

After a couple months of messaging and calling, we started flying back and forth for probably less than it cost to park our cars at the airport. Without the option of that traveling, I'm not sure how we would have moved forward.

Stefanie's job was in transition (with some really unique twists that could only have been divinely orchestrated), and she opted to move to my area. This obviously allowed our relationship to blossom, which led to our engagement within 6 months and our marriage a bit over a year later.

We've been happily married for nearly 18 years, and have two amazing daughters. As in all marriages, some times have been easier than others, but we both agree that we're currently in a really good/strong/sweet spot in our relationship.

God has given us untold blessings, and opportunities to savor our lives in His service.

There are more decent Christians matches in this dating site compare to other dating sites.

I commend how the staff of ChristianCafe screen the matches to avoid scammers. You have good promotions for membership and you have less scammers because you take care of your members.

I was on another dating site, but I don't like their matches so I decided to go back to Christian Cafe.

God bless you all at ChristianCafe!

One of the most encouraging things about it is that the owners seem to have deliberately chosen to make their own Christian faith a part of how they have positioned the site.

The very well thought out design makes this the only such site I patronize.

I encourage others to do as well.

ChristianCafe.com is a great site - I like the atmosphere of it!

I found my partner here on Christian Cafe.

We connected in November 2019 continued communicating since, today a week we met in Nairobi Kenya.

I really like the style that ChristianCafe.com has created.

And I love the questions you ask. I find this to be a good place to find a partner.

I chose ChristianCafe.com because I woke up one morning ready to begin inquiring of God and others to find a serious relationship, beginning in friendship.

I am so pleased with your customer service availability and follow up.

ChristianCafe.com is the best chance to meet a true Christian.

The other sites say they are Christian but that's not what I have found.

While watching program about Tinder scammers, I thanked God for my husband who I met through ChristianCafe.com.

We found ChristianCafe.com a safe place to meet someone, and even more so when we placed this decision in God's hands and not in our own wants.

We met on ChristianCafe back in 2010 and this year we will have been married for 11 years and we have two daughters :)

The advice we give to every single person is God has someone for you, but you must always ask specifically for your spouse in prayer and according to the will of God, which is good, pleasant and perfect. If the means to meeting that person is on the Internet, then pray is more so that the Lord will give you direction and all peace and not get carried away by emotion.