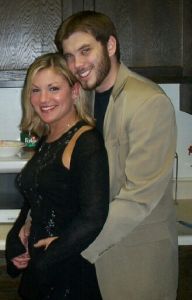 Jenn and Jeff all dressed up for date night 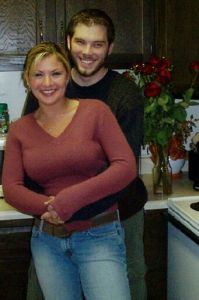 Jeff and Jennifer of Glen Burnie, MD are the winners of our Wedding Contest (which ended December 2003).

Their entire wedding, including rings, wedding dress, reception hall, honeymoon and more is being paid for by MT Media and their partners. Their wedding will take place in July 2004 in Washington, DC. Here are some pictures of the lucky couple.

I want to thank you for helping me to find the man of my dreams. 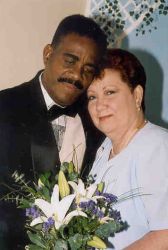 Rhodell met the man of her dreams, Trev!

We started corresponding in October 2003 and we were married in the Cayman Islands on 19th February 2004.

He is the best and I pray that others will find their soulmate as well.

In April 2002 God was leading me to my first teaching job in San Jose, CA, all the way across the country from my hometown of Grand Rapids, MI. In an effort to make some friends, I joined ChristianCafe.com. 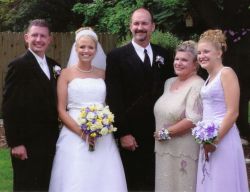 Well, the first day, I met the man who is now my husband. I saw his profile and we quick messaged each other, only to find out that he lived in Simi Valley, nearly 5 hours from San Jose. None the less, we continued talking for two months.

In June 2002, Brent came to meet me and my family in Michigan. My brother and I picked him up in Chicago and we immediately hit it off! By the end of the weekend, we had decided that we were going to date, with the intention of marriage.

In November 2002, we were engaged! On July 18, 2003 we got married and had a wonderful wedding and reception in Grand Rapids, MI.

God is truly good. Thanks to ChristianCafe.com, we are now happily married and growing more with God each day! We both finally found our best friends!

I don't want to go without thanking you for your wonderful website.

I signed on for a trial membership in February 2002. One thing I noticed about ChristianCafe.com was the diversity of the categories of church denominations that are offered.

I am Apostolic by faith and attend a UPC church. Yours is the ONLY Christian singles website, as far as I know, that offers these as distinct choices. On behalf of all Apostolic singles who use ChristianCafe.com, I thank you for that!

I began meeting some new people online, so I paid for one year's membership.

In September 2002, I was contacted by Paul. We had a lot in common (mainly our Apostolic faith). Somehow I had a feeling that he was "the one," however, I live in Florida and he lived in Pennsylvania.

We corresponded for several months. When I saw that his profile had been removed, I figured he had most likely met a woman who lived closer to his home, so in February 2003 I renewed for another year.

After several months I received an email from Paul. We rekindled our friendship, this time becoming better acquainted. We corresponded for several months and we were considering definite marriage.

Paul's employer was willing to accommodate him by allowing him to work from Florida during the winter months. God was opening all the doors for us!

In July 2003, Paul came to Florida so we could meet in person. We were both almost sure at this time that we should marry. Meeting face-to-face made us certain.

We were married on October 15, 2003. Both Paul and I are thankful to ChristianCafe.com for providing us a means to meet while we were living more than a thousand miles apart. But mostly we are eternally grateful to God who orchestrated the whole thing!

It has been a long time of waiting for us, but boy, was it worth it!

I wanted to let you know that I am getting married on June 26th to a man that I met on ChristianCafe.com.

He wrote me back in late September, we met for coffee in mid-October, starting dating "with a purpose", seeking the Lord all the way, and on March 20th, the day after my 35th birthday, he proposed.

We are both older mature believers (he's 37) never married and were waiting for the Lord's best for us.

I could not have dreamed up a greater man for me; he is everything I ever prayed for and more and I know he says the same about me (smile). So I wanted to let you know and say thanks and God bless you.

Thanks to your great site, I met a wonderful man whom I will be marrying on May 8th!

We met in a ChristianCafe.com Chat Room. Thank you for your great service!!

I'd like to first to Praise the Name of the Lord!

Through ChristianCafe.com I met a really nice guy and we are planning to get married by July or August. Thank you Christiancafe.com!

I was looking for a pen pal, or someone to chat with. But I found so much more.

I met someone very special on ChristianCafe.com, not long after I joined.

We are now engaged and hope to be married by the end of this year (I say "hope" because our church is being built right now).

I really appreciate ChristianCafe.com, and I have recommended your site to many others. The Lord blessed my life so abundantly through the friendship I developed with a very special man of God. Thanks for introducing us. I never thought I'd be where I am today, feeling the way I do. It's wonderful!

Have a blessed Easter holiday! Thanks again for offering such a quality website.

Meeting the person of our dreams.

We seemed to hit it right off from the start of exchanging emails. We started talking on the phone for hours and hours in September 2002. When we finally got to meet in person in April 2003 we were reassured that we were meant to be together for life.

So in May 2003 we were engaged. We just knew that God had us for each other and we could not be apart for much longer so in August 2003 we were married! Oh yea!!!!

Long distance is not easy but it sure does give the times that you do have together more meaning.

God has sure blessed us and we have been happily married (and not 2000 miles apart!) for 7 months now.

God has blessed my search in ChristianCafe.com.

Yes, our God and heavenly Father continues with modern miracles even today, only if we open eyes, and ears and stay still! I have met a wonderful woman "equally yoked", caty406, and we are going to get married hopefully in June.

As soon as we have some pictures we will forward to you. We praise God and we thank Him. We also thank you all with love in Jesus.

God bless all your searches and may He fulfil all your wishes and reward your faith!