We had to write and tell you about how we met on ChristianCafe.com and finally married (in a castle in Italy). 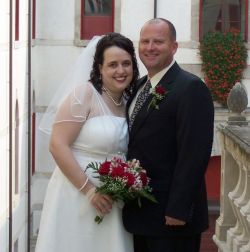 Shanyn and Steve married in a castle; yes, a castle!

I was living in Las Vegas and was planning on moving to NC to live near family.

On a dare I created a profile stating I lived in NC in order to meet people before I left. Steve just thought he would give the site a try.

He emailed me, I emailed him again, and the rest, as they say, is history.

Thanks for offering the free trial to each of us - it is what allowed my husband to find me.

Attached is a picture from our wedding in a castle north of Venice, Italy, a few weeks ago. We both continue to be in awe how God used ChristianCafe.com to introduce us.

I met a wonderful lady through ChristianCafe.com. 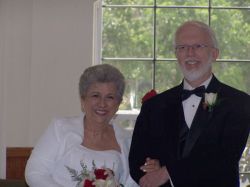 Dan beams with joy at his wedding 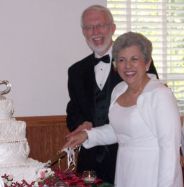 Dan and his wife share a laugh at the wedding cake

After 11 months of 'getting to know each other', we were engaged last October.

On April 26th we were married. For that reason, I would like for my profile to be removed.

Thank you for being a part of God's plan in bringing us together.

Peter and I are excited to let you know that we met through ChristianCafe.com in January, 2007 and were married May 3, 2008! 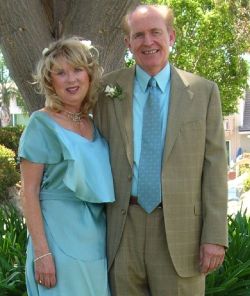 Peter and Penny's meeting was really a "God thing"

YES, we are a testimony that God uses many different ways to introduce people, but using a Christian website certainly worked for us.

I especially liked the essay questions in profiles. After reading Peter's profile, I thought "WOW - this guy sounds just like me!" We are both recruiters and very comfortable finding candidates on job boards so online dating made sense to us.

Our meeting was really a "God thing" because Peter was searching in Washington State since he wants to eventually retire there. He wasn't aware that I had only been in Washington for 6 months and was now back in California, 20 minutes from where he lived.

I hadn't had time to change my address, but God knew that we both had a love affair with Washington State and brought us together in His perfect timing.

We had each been married twice before and wanted to make sure we spent enough time getting to know each other and with our friends and family before getting married.

I started attending Peter's church in March 2007 and was able to meet some of the guys from his Bible study and witness first hand his commitment to grow spiritually.

We took several trips up to Washington and our relationship continued to grow. We were blessed to live so close to each other, seeing each other at least 3 times a week. We began serving together as career coaches to adults at a transitional living home.

We had a beautiful wedding in May 2008 and eventually plan on having a 2nd home in Washington. God has been so faithful to answer our prayers for a lifelong companion and we believe that "the third time is a charm".

Thank you for bringing such happiness into our lives!

Thanks for helping my dreams come true!

I just wanted to let you know that Karla and I are engaged.

I met my special half, God given partner, on ChristianCafe.com.

PRAISE BE TO GOD FOR ALLL THE GOOD GIFTS HE GIVES US!

I very excited about our relationship!

I have met a lovely man from California. I will be travelling over to the U.S to meet him in July this year.

Thank you ChristianCafe.com for this website. It is awesome and I will be recommending it to friends!

You're the best....I really appreciate your terrific help and personal input!

It's not often that a customer service experience is as thorough and pleasant as yours....thank you!!! Abundant Blessings to you and yours.

I would like for you to remove my profile from ChristianCafe.com.

I have found someone. Thank you!

5 years after meeting through ChristianCafe, my boyfriend and I are getting married!

We had our first date in May 2003 at the Tate Modern Art Gallery in London.

In March this year Simon took me back there under the guise of seeing an exhibition, and proposed. The wedding is set for December this year in Leicestershire.

Thank you so much for your services! They were very helpful!

In fact I am now engaged to be married from one of your subscribers. I will continue to pass on the information to others that "CHRISTIANCAFE.COM, really works"!

I met my husband on your site. Thanks!

I was married this past March to a wonderful man I met through ChristianCafe.com!

My husband and I are both in our 50's and are grateful to ChristianCafe.com for providing the means through which God worked to bring us together.