ChristianCafe.com is a great investment!

Lewis drove 6 hours to be with Lydia. Don't they look great! 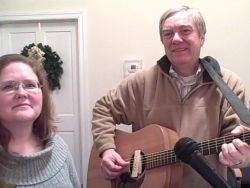 Lewis sings to the lady of his dreams, Lydia!

Lewis: I met the lady of my dreams here on ChristianCafe.com. It was love at first site.

I am recommending ChristianCafe.com to other Christian singles.

Lydia: I took advantage of the free trial in Fall of 2010 and met Lewis within the first week.

It has been so wonderful getting to know him, and I feel that God put us together through your site. He is the one for whom I have been praying and is a truly awesome man of God, a man after God's own heart!

It is as if God took our detailed lists out of our hearts, read them, and then created us for each other.

Lewis even drove 6 hours just to meet me on New Year's Day. What an appropriate day for us to meet. A New Year and a New Beginning for each of us!

We wanted to share our happy update - we married on January 22, 2011 and we are enjoying our married life so much. 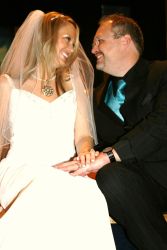 Jewell and Aaron full of love on their wedding day

Jewell and Aaron love sharing their lives together 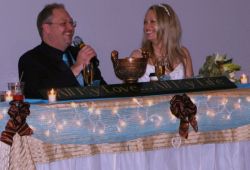 Lots of laughter on Jewell and Aaron's wedding day!

We love loving sharing life together! We wanted to share a couple of pictures from our wedding.

[Editor's note: See November 2010 testimonial to hear how they met!]

Our story was published on the front page of our local paper!

Bruce and Nadine were married in ICU in front of Dad

Bruce and Nadine have their first dance in the waiting room

We would love to share our story with you especially because it was published in the local Sunday paper on the front page.

Just wanted to share with you a little about Rob and myself. 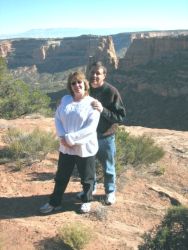 Stacy invested in a membership and has been married for almost 9 years now to Rob!

I had a brief trial membership and decided not to pursue membership/dating through ChristianCafe.com.

A short time later I received a message that somebody had inquired about me and sent me a message. I simply had to choose whether I wanted to sign back up and retrieve the message or not.

I really thought about this because at the time I was a single mother on a fixed income and my thought was that it might be a waste of money.

I'm so thankful that I did sign back up because we have been together for almost nine years now (Sept 2011).

I can't imagine never knowing him, let alone not having him in my life. Rob is a faithful man that walks in his faith everyday, and it is nice to have a man that I can respect and trust completely.

We started conversing on-line around August 8, 2002, and exchanged phone numbers the first of September, and we finally met in person September 4th, 2002.

It was kind of funny because we met in a bar of a hotel he worked at years previously, and drank mineral water (neither of us drink alcohol).

Then I convinced him to eat at a restaurant nearby that I had eaten at once, only to find out it had been closed for four months. We had a wonderful time, a lot of good laughs and hit it off right away.

Rob is the Christian partner I had always wanted - we do all kinds of home repairs such as adding cement sidewalks and a patio to our home, we both love music, and we both like coming home at the end of the day and not into social events and such.

We do all kinds of computer projects, computer programming and turning family 8mm film into videos with music from that era, or music that means something to family members. We stay busy with all kinds of projects, and enjoy our time together.

I had always wanted to be a foster/adoptive mother so in January 2007 after completing six weeks of training through the local DHS, we took in a 11-year-old girl. I quit working in a busy doctor's office a few months later to stay home and help her catch up.

We adopted her in January 2009, it was a very touching adoption and there weren't many that had dry eyes in the court room that day. Rob works for probation and most of his co-workers were at this event, as well as past foster parents, caseworkers and friends.

We took in a nine year old girl in March 2009 and we are adopting her in March 2011. We decided to take in yet another girl in May 2010 when we heard she needed a new permanent home, and we are seeking to be legal guardians for this 14 years old.

Rob had two children from a previous marriage, now 24 and 22, and my son is now 23. So we have been doubly blessed with a family of six children now, and whether they are biological, adopted, step, or foster they are all treated equally as our children.

The three youngest have plenty of challenges to overcome past abuse, but they are doing very well. I can't even imagine my life without Rob and I'm very thankful to God as well as ChristianCafe.com for helping me find that perfect match.

It is amazing how different a marriage can be when you have the "right one". I was also able to live out my hopes of being a mother to more than one child.

A current ChristianCafe.com member told me that she had taken all my prayers and compiled them in a journal or album (forgot for sure). Imagine!

I was so very very blessed.

Then she added that when when she needed prayer she took out my prayers and read. By doing this she explained that she has been led to read in various places in the Bible.

It has meant much to her but how much it meant to me too! I have taken creative writing courses and I was so unsure for so long if the words I was using were maybe just compiled words that I put together because of what I had learned from those courses.

Eventually I came to this conclusion: undoubtedly I was given heavenly help AND if Jesus is happy with what I am doing--and people are getting blessed--it matters not what I think or understand. Well it made sense to me at least lol.

That is what happened to me. I am in a relationship now where prayer was from the start. It is wonderful and I have never experienced this before in my life. Not like this in a relationship.

It is wonderful and it all started with a prayer on the prayers page -- if anyone ever wondered what effect they may have had on others after they posted.

Well I did also add that I stayed in contact with some of these on my private mail. THEN I added that most of these were females but "a change is as good as a rest." and this man answered me.

We are still conversing and he and I have begun a Bible study together. I am the pupil. All this was done on ChristianCafe.com.