Today is our 2nd anniversary thanks to ChristianCafe.com. 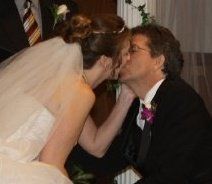 Michael was custom ordered for Katrina! 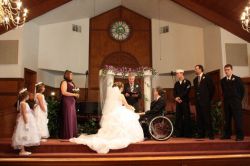 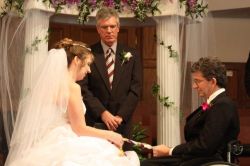 Michael, Katrina and God are a 3 cord strand 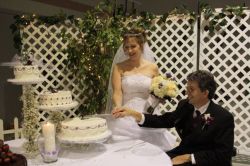 Michael and Katrina laugh while cutting the wedding cake 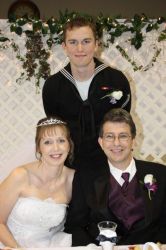 In 2001, after 11 years in an abusive marriage, I unexpectedly became a divorced parent of two. In the 9 years I was divorced, my main focus was on raising my children and trusting God for a husband in His time.

For fun, I tried some online dating services and eventually signed up at ChristianCafe.com. I paid for a membership for a brief time, but did not seriously desire to connect with anyone. I was quite content at being single so I stopped going to the Cafe altogether.

On March 23, 2009 I decided to go in and check my inbox to see if there were any funny emails to read (I got them from time to time). I had no idea that God was about to use ChristianCafe.com to bring about a complete overhaul of my life.

My Heavenly Father was also about to provide for a huge transition into a totally new phase in my walk with Him. I decided to go ahead and just browse ChristianCafe.com and see any new faces I was matched up with.

It was at this time that I came across a profile picture of a man from Alabama who was very handsome, but in a wheelchair. My first instinct was to just move on to the next profile because I just did not think I was selfless enough to date a person who was handicapped. But, I was curious as to how he ended up in the chair. I wanted to read his story. I wanted to find out more.

So, I read his profile and was blown away. I thought, "If could place an order for a husband, this would be his profile". I really asked myself if I could overcome the handicap and take a chance on this wonderful man.

After praying, it didn't take long to realize I'd be crazy to pass by this potential opportunity. I was talking to an acquaintance shortly after who informed me that in her prayer time earlier that week, she felt that God had given her a "word" for me (oblivious to what was going on with ChristianCafe.com). It was Isaiah 62: 2-4. It was received as such a message of hope. I had been through so much and had struggled so long and when God's word was spoken in that moment, I believed.

I knew God had given this person a word of prophecy and I could not let it go. So, when I went home that evening I couldn't sign in quick enough! As soon as the page popped up, I began looking for his reply and there it was! I was so excited!

This began a plethora of email exchanges that quickly led to phone conversations and video chats. Although things were going great, I was very apprehensive and guarded my heart not to get carried away too quickly.

But with every doubt came affirmation from God that I needed to hold on and not run. Every time I doubted, something would happen that would tell me that this relationship was part of God's plan. On May 09, 2009, Michael and I had plans to meet in person for the first time. I was so nervous I could hardly eat. But not Michael; he knew from the beginning. He had settled it in his heart and he waited patiently for me to get it settled in my heart (which took much longer!).

The moment arrived when he had an opportunity to put his arm around me. I was freezing. He gave me his jacket and as I had anticipated, he took advantage of the opportunity to "hold the jacket up" on the other side...and it felt WONDERFUL! The next morning we went to church together before he returned home. Later he told me that it was the best first date he had ever been on and even admitted being a little misty eyed as he left.

To make a long story shorter, we married on November 7, 2009. We chose November 7 because November is the season of Thanksgiving and the number 7 is God's number for completion and perfection. We are a three cord strand with God at the center, growing ever happier in our marriage with each passing day.

This testimony is completed on the day of our 2nd anniversary and presented as a gift to my "Hubby" from his "Wifey" with so much love. I give all the praise and honor and glory to the only One who deserves it. Thank you Father for blessing us both with this gift of marriage.

It is our desire to have a relationship that will be a testimony to others of Your great love. "What God has joined together, let no man put asunder."

We met on Sept 12, 2009, and celebrated the holidays together by going to meet his extended family.

We lived about 40 minutes away from each other, but we can make it work with patience and trust... and phone/e-mail!

We are quite addicted to each other's company, and it was so helpful to have a Silver Ring on my finger. I never ever ever thought I would be tempted in that way, but let me tell you, when you have found the right person, the world begins to mess with your mind, ladies (and gentlemen, too).

God designed marriage, but getting to that point is a daily battle against the world's view of dating and relationships. Keep your Faith strong, and PRAY TOGETHER like Greg and I do!

The best thing about this was that ChristianCafe.com had us answer the right questions from the start... truthfully and in full, so we knew who we were looking at and what they believed in. By being honest and upfront about those key points, and following Dave Ramsey's advice on the four things you MUST agree on (faith, kids, in-laws, and money), we have launched into God's will with openness, able to really rely fully on His will and His plan.

God's timing is perfect. To me, the amazing thing is that Greg's the prince that I prayed for as a child, I never (never ever!) thought that God would deliver on that prayer request!

Greg (finally!) proposed on March 6th, 2010. We were married September 2010, and our first baby is due November 2011. So this process has not only made me happy beyond my wildest dreams, but it's renewed my walk with Christ and my faith that God is with me, even when I was quite lonely.

The season of loneliness is finally over for both of us, we're looking forward to many years together, hopefully with several milestone anniversaries down the happy, winding, and beautiful road with Christ.

Please take me off of the site!

ChristianCafe.com is a great site to meet Christian Singles.

I married a wonderful woman from the Philippines. We've been happily married 6 months as of Oct 26, 2011.

WHAT AN AMAZING EXPERIENCE!!

To this day I have grown closer to those friends I have made on this site!

I would never have dreamed of every being able to pray for healing for someone for breathing during a crazy chat session or encouraging others back to their walk with Christ or better still finding a potential friend that is possibly my significant other!!

We are all so close and yet so far distance wise!! I can never explain to you what this site and its function had on my life...during the time that I needed it the most! I am so grateful that God allowed me be safe in the care of another ChristianCafe.com member.

No fleshly person could have reached me. I thank you so much! True men and woman of God have not been found on any other site that I have been on!

This one takes the cake!!

We met through ChristianCafe.com and have been together since February and going strong, so thank you!