Jared and I met on ChristianCafe.com, neither of us expecting much out of our experience however God had other plans. 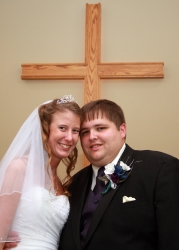 God has blessed Jo and Jared in marriage

One night, Jared started talking to me through the online chat feature and our conversation went on and on, turning from minutes to hours.

I had no intentions of talking to anyone for a long period of time because I wasn't sure about the online dating scene, however Jared was different from every other guy because he was attracted more to my faith and the things that I was interested in versus my looks (don't get me wrong - he was attracted in that way too, but he didn't get hung up on it).

After talking for one night I couldn't help my feelings of hoping to talk with him again, as there was something about our conversations that was addicting and I didn't want it to stop.

In the following nights I logged on just to see if he was there so that we could talk again. We ended up talking for a few nights in a row and then eventually, our conversations drifted from a few during the week to many. This went on for a while and we eventually decided to meet.

It was a bit odd at first, but God worked his magic and after a day together we were fast friends. By the end of our first visit we both knew that we would get married in the years to come.

Through a series of events God worked in each of our lives to prepare us for each other and used ChristianCafe.com as the tool to bring us together. After a little over a year of dating and enjoying each other's company, God blessed us with a house and finances to get married this year on August 11, 2012.

Since the wedding, He has blessed us with our many needs and has given us more than we could have ever hoped for in a spouse. Thank you ChristianCafe.com!

Thank you SO much for allowing us to meet through your site! It has been one of the greatest blessings in both our lives.

We were married on December 1, 2012, exactly one year after our first email correspondence on ChristianCafe.com. 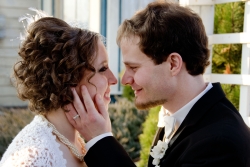 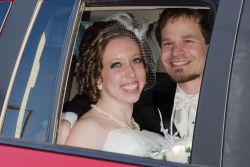 Carrie was happily married in December 2012, one year after joining ChristianCafe.com

Yes, it may have been quick, but when God introduces you to the right person, you know. And for us, there was no doubt.

We are thankful for the way that God used your website to help us meet. Thank you for serving God in this way!

Thank God for all his blessings to so many who have met their spouse through your site. We are surely grateful!

Carrie [No usernames given] January 2013

We met 2 years ago on your site and engaged a year ago. 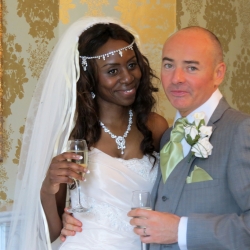 Mike and Rema married 1 and a half years after being connected through ChristianCafe.com

We were married this August 2012. Thank you so much for your help in finding each other!

I enjoyed being on ChristianCafe.com!

I know several people who R enjoying the site as well. Once again I think that you have a wonderful ministry. It's been a great way to meet people and grow in some ways.

Thank you for your ministry!

Just want to let you know that I found my wife on ChristianCafe.com.

ChristianCafe.com was used by God to answer our prayers.

10, almost 11 years ago, I met my wonderful wife on ChristianCafe.com. She was in Illinois and I lived in Oklahoma.

We met in December of 2001 and now have 3 children and a great life together serving God.

I thank God every day that He is a great father God and still answers prayers.

I want to encourage you for your work in bringing singles together and we wish for you all the best for the future.

This site is a breath of fresh air!

I am so sincere about that comment. I am so favorable impressed with the total overall presentation of ChristianCafe.com. I think it might be the crown jewel of the Christian singles websites.

I am in the process of creating my profile and getting started in this Christian journey for Christian relationship fulfillment!

It's hard to believe it has been over 11 years since I went on your site and ended up meeting the man of my dreams!

We moved to Michigan, a year after we were married, then went through IVF and now have triplets who are in kindergarten!

We are thankful to God and to your website, as the vehicle He used to bring us together. We are so blessed!