We wanted to share our day with you as a way of saying thank you for your part in bringing us together. 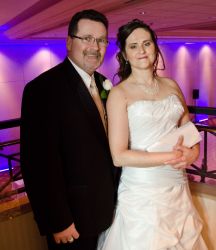 Laura and Dale on their wedding day 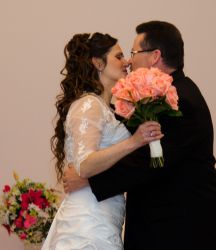 Not much distance between Laura and Dale now! 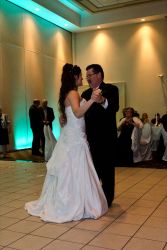 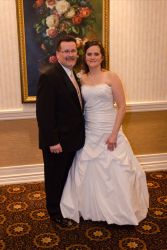 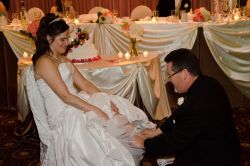 Dale and I met on the ChristianCafe.com November 24th 2010 and after e-mailing and talking on the phone for six weeks, we finally met on January 17th 2011.

We saw each other on the weekends which was difficult as I lived and worked in Burlington Ont. and Dale lived and worked in London Ont. But, the distance didn't deter our romance and in May 2011 Dale proposed to me and we began to plan for our wedding.

We were married March 17th 2012. I want to encourage others who are looking for the one special person God has for them to first put their trust in the Lord and believe that He will bring the right person into your life at the right time.

I've met some really great friends on the Cafe over the four years I've been on and off and some I'll still keep in touch with. Thank you again to all of you at ChristianCafe.com, may God richly bless you.

Two years ago I joined ChristianCafe.com because I wanted to meet a Christian man who lived in my area. 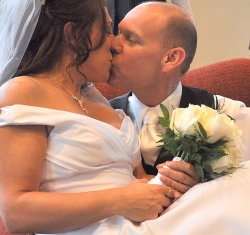 Mary and Rick have never been happier!

I did. We got married on January 29, 2011. We each have never been happier. We are best friends as well as committed partners.

ChristianCafe.com has been a gift from God used to bring together two people who would have never met.

Thank you for blessing us and changing our lives! 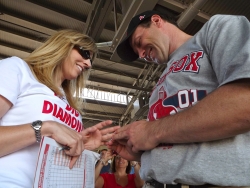 Kevin proposed to Trina at a Cubs/Red Sox game 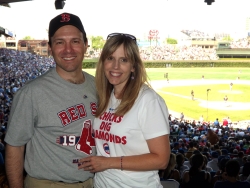 We wrote back and forth several times, talked on the phone a few times, and then met in person on April 30, 2011.

We began dating and spending more time together and getting to know each other better. This past winter/early spring we took the "Preparing for Marriage" class at Kevin's church. We both liked the concept of pre-engagement counseling and would encourage other couples to consider it also.

Then on June 15, 2012, Kevin proposed to me while at a Chicago Cubs/Boston Red Sox game. He has been a life-long Red Sox fan and I'm a die-hard Cubs fan.

We are planning our wedding for this fall. Attached is a picture taken of the two of us just after Kevin proposed at Wrigley Field and a picture of Kevin putting the ring on my finger.

We are two Christians who met via ChristianCafe.com who would love to offer you our most sincere thanks for this wonderful service which has brought us together! 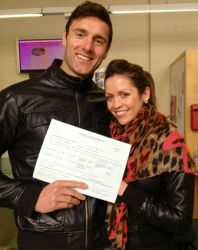 Emmy and Gareth ordering their rings for their September wedding 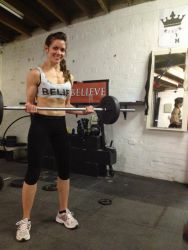 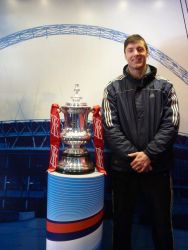 Emmy's story: I had been using ChristianCafe.com on and off since late 2005, shortly after having made a commitment to Jesus in February that year. As someone who had experienced almost 25 years without God, I was determined that marrying a non-Christian was NOT an option!

My mum had been carrying a prophetic image and many encouraging prophetic words with her since this time - and in times of doubt and discouragement, God would reinforce these even more strongly.

After several years of searching for "the one", changing vocation several times and travelling to China and Australia before returning home to resume work as a Mental Health nurse, I decided to give ChristianCafe.com one last shot.

It was shortly after New Year's 2012 that I decided to have a peek online and noticed the profile of a new member, appearing to tick ALL of the boxes for qualities I was looking for in a future husband... and more!

I just thought "what have you got to lose?!" and sent him a cheeky 'wink'. Much to my surprise and amazement, he replied and we began exchanging messages...

Gareth's story: October 2009 was a huge year for me - I left my home in Wales and moved to England to manage a nightclub. The job didn't turn out to be the beginning I was hoping for.

There were many occasions where I wanted to return to Wales, however, there seemed to be an invisible barrier not letting me return to a comfortable life.

10 months later I had left the job and had been drawn to a church that had two pastors: one wise and very direct the other younger and dynamic in his guidance. This combination created an eagerness to learn the word and one day after a boxing training I walked to a nearby hillside and in a spate of uncontrollable tears asked the Lord into my heart.

A year after the Lord saved my life I was baptized and gave witness to my family, all of whom are non believers. At the end of 2011 I became aware that my last 7 years of bachelorhood were nearing an end and sought a Christian partner.

Our story: We knew, as soon as we first met, one misty morning in Oxford on Friday 13th 2012, we were meant to be together!

Exactly 2 months after meeting, Gareth flew to Tenerife where Emmy was on holiday for her father's 60th Birthday and popped the question. Now, it is less than two months before our wedding date on 1st September 2012!

A month of planning and the marriage is set, our church is superbly located across from the City's Park and the reception is booked in an 18th century Methodist church turned restaurant. Our family and closest friends have received their invites and we are indeed ready to show the world our Love and publicize how ChristianCafe.com brought us together.

We have prayed about our new future together and this scripture speaks to us immensely:
Mathew 5:16
In the same way, let your light shine before others, so that they may see your good works and give glory to your Father who is in heaven.
Ultimately we have Jesus and ChristianCafe.com to thank for our union.

We lived 300km apart and we are very thankful to God for allowing us to meet. 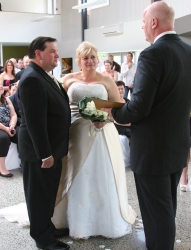 Leslie and Kim on their wedding day 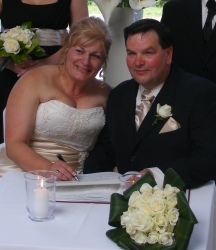 Kim is the kindest man Leslie has ever met :) 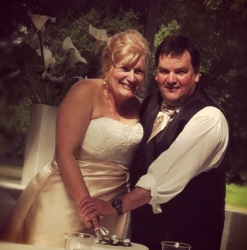 One Saturday night in May 2011 when I was bored and flicking through the same pictures I saw this new profile come up that said he was from the same state as me.

I read his profile and really enjoyed his humorous manner. No picture as yet, but I relaxed as I felt, I could have written what he said. This was Kim's first attempt at 'looking for a friend' and was a little taken aback when I asked him if he was up for a chat.

Very quickly we became at ease with each other, and within 3 weeks, he came to visit. 3 weeks later he proposed down on one knee with a gorgeous ruby ring.

HE SURPRISED ME.. and no one does that!! He is the kindest man I have ever met, and he treats me as a Princess. We knew that God had put us together and we are so thankful and blessed.

We married in Nov 2011 and it's a great new chapter for both of us. Thank you ChristianCafe.com for providing a place for us to meet.

My husband and I just want to say thank you for introducing us! 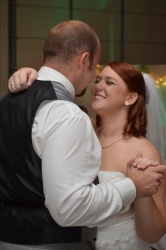 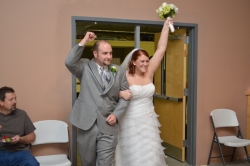 Paula and Luke letting the world know they're married! 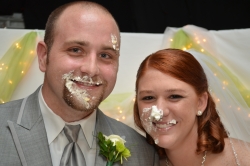 Paula and Luke hamming it up for the camera

Paula and Luke hit it off right away 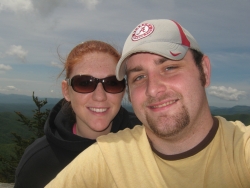 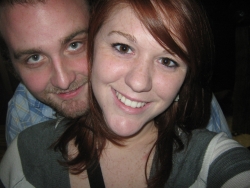 Paula is all smiles after finding Luke 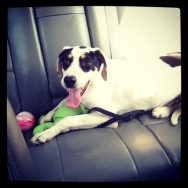 We were both on the free trial on your site when we first met around February 2010. I wasn't ready for a relationship at the time but was still looking for that guy to just talk to and have in my life.

What's funny is he said he thought I was desperate at first. Regardless we talked here and there for a little while on your site and from the VERY beginning we were hitting it off. He loved the fact that I was honest and open and I loved the fact that for some unknown reason he was so easy to talk to... (he's always been a great listener and I was going through a lot at the time).

Things progressed in June when he reached me again and I was very excited to talk back to him. We talked for about 3 months before we decided to make it official. We made it official September 25, 2010 and didn't meet each other in person until October 16, 2010.

Since I was from Alabama and he's from North Carolina we decided to meet halfway in Woodstock, GA. For a while we were only seeing each other every 2-3 months.

On August 6, 2012 we decided to make our engagement official and on May of just this year I moved to NC to prepare for our wedding on June 9, 2012.

Now we are happily married and just got a daughter (dog) Heidi!!

Once again, thank you so much for your website. If it weren't for ChristianCafe.com my husband and I never would have met and I wouldn't be as happy as I am today!!