We just wanted to share our testimony and thank you for making it possible for us to meet. 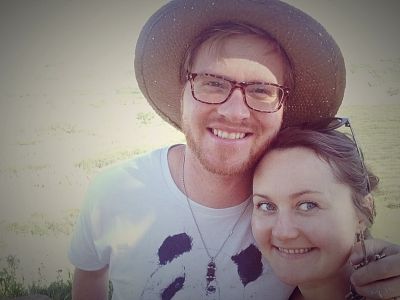 Jason and Pirita beaming at the camera 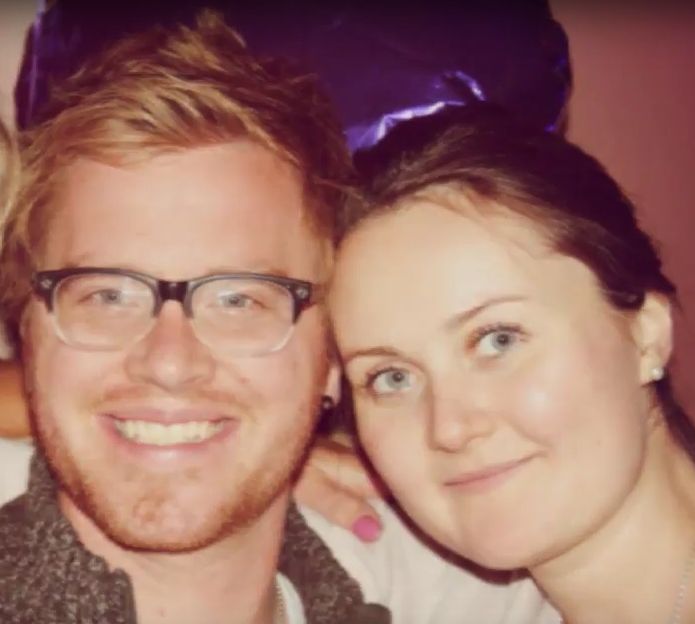 A very happy Jason with his wife, Pirita 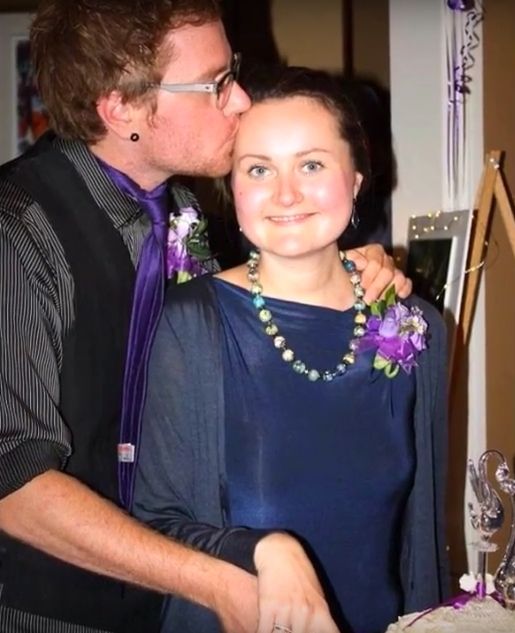 Don't they make a great couple! 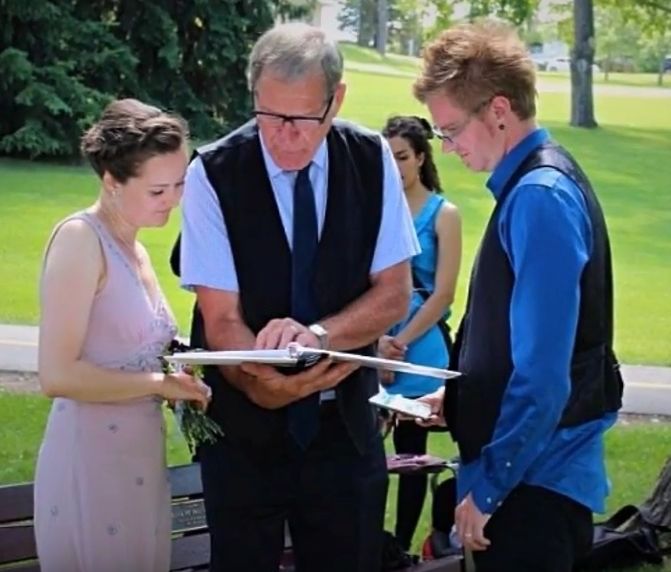 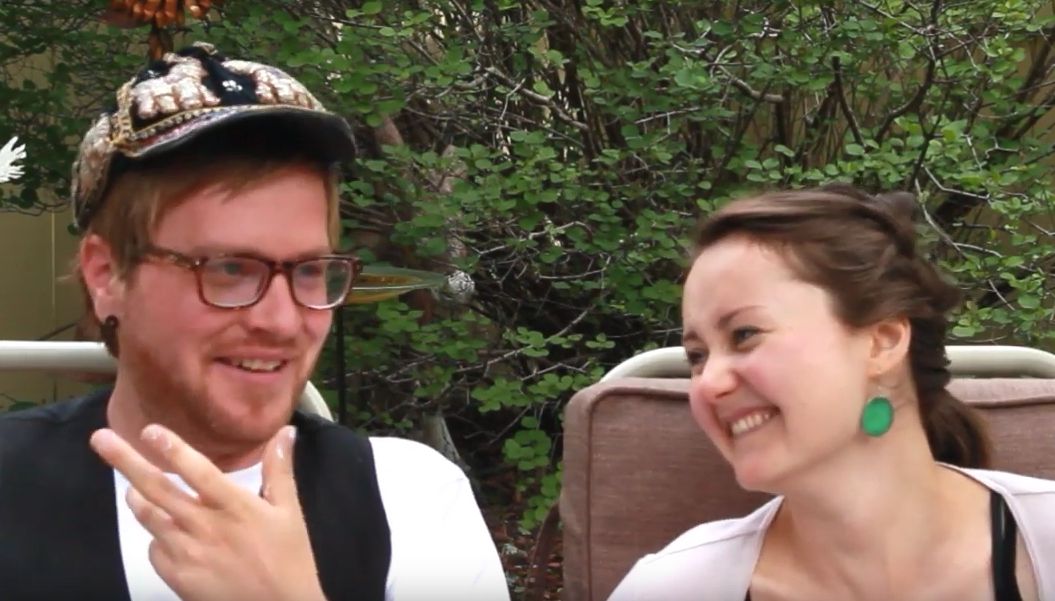 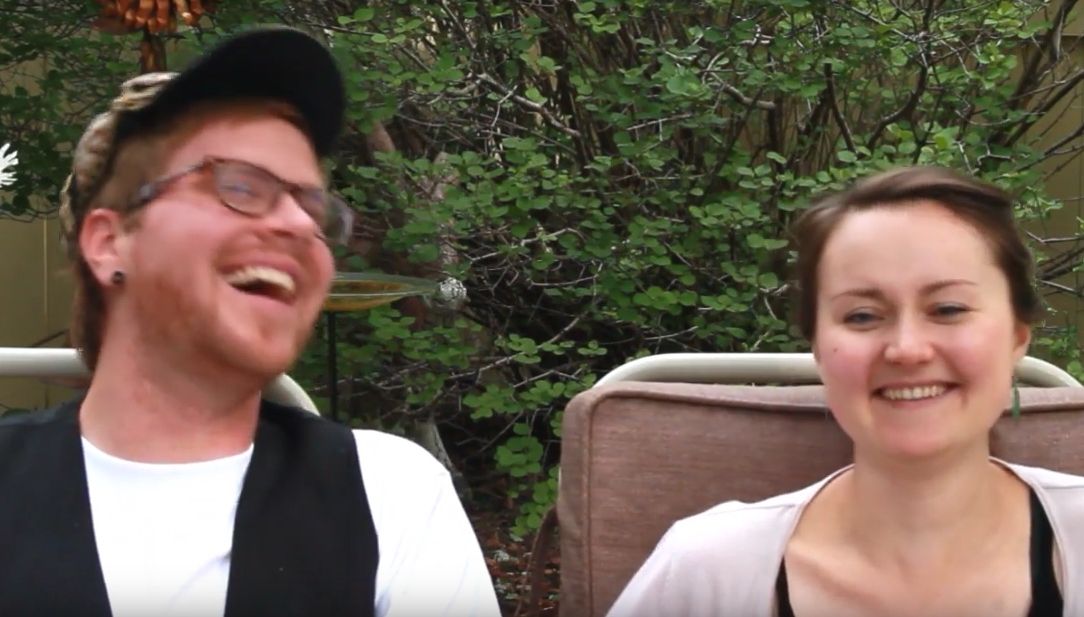 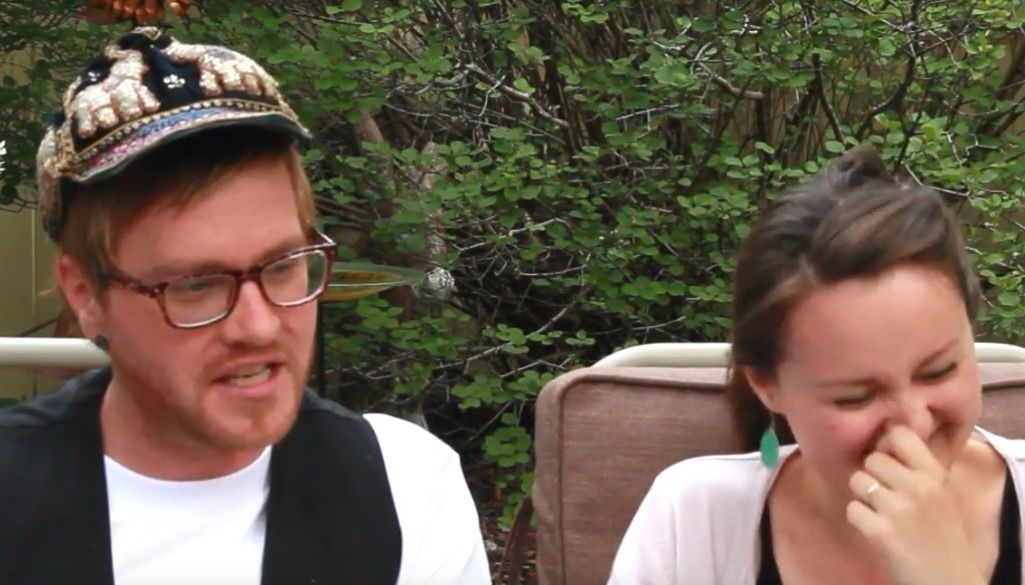 Pirita trying (and failing) to contain her laughter! 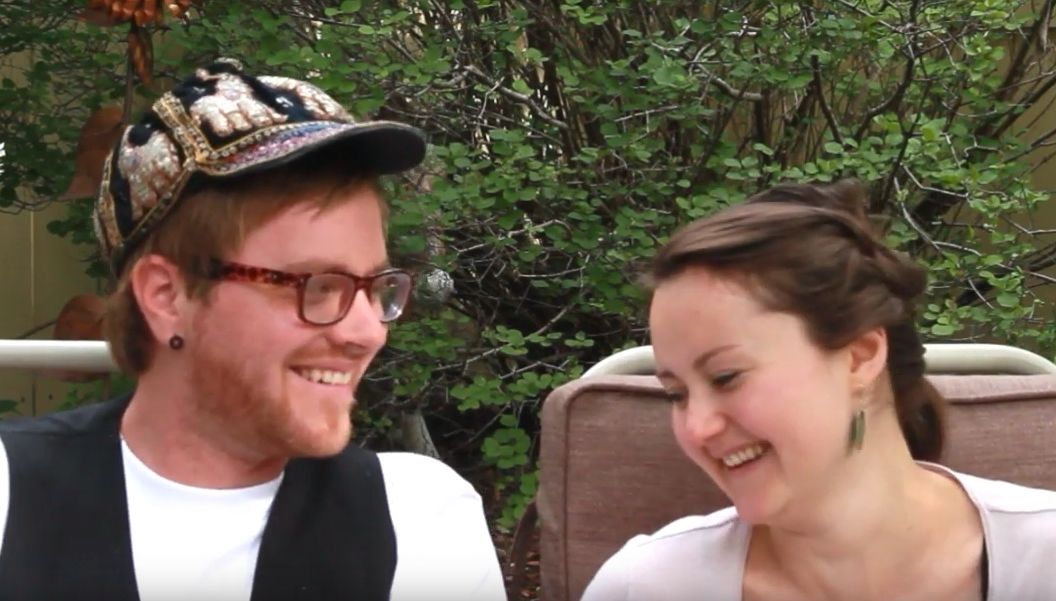 I, Pirita, lived in Finland, and Jason, my husband, in Canada. We met in Christian Cafe on February 7th, 2016, messaged and Skyped for 5 months Every Single Day until we decided I'd fly across the world to meet him.

A week later he proposed to me, and a week later we got married in Calgary, AB, Canada. During those 5 months we got to know each other in a deeper way than many "old-fashioned" dates allow, as it was easier to share deep, intimate things through writing. God spoke clearly to each of us, giving us peace and joy in our hearts, so the decision to get married was easy to take.

Iron sharpens iron - we are a very good match. God truly does fulfill the desires of the hearts of those who fear Him, He hears their cries and rescues them! (Ps. 145:19)

Thank you very much for your website that's focused on Godly relationships. 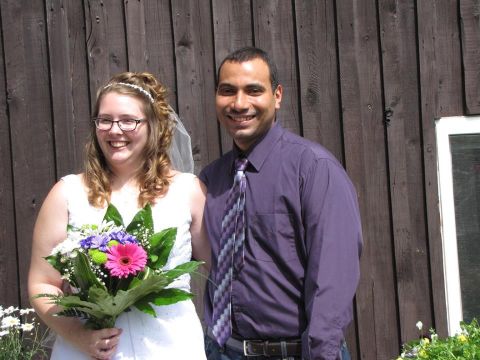 An elated Lauren and Fady on their wedding day

I met Lauren on your website December 2013. She was living in Peterborough, Ontario (originally from Quebec) and I was living in Amherst, Nova Scotia.

Please pray for us that God will walk us through a trial in our life right now. We don't have babies yet but both of us can't wait to have them! Just waiting till a certain prayer get answered first.

I will not be coming back. I THANK YOU very much for your incredible and valuable service! 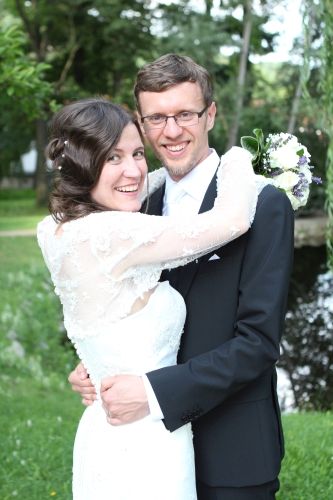 Lisiane and Matthias were made for each other 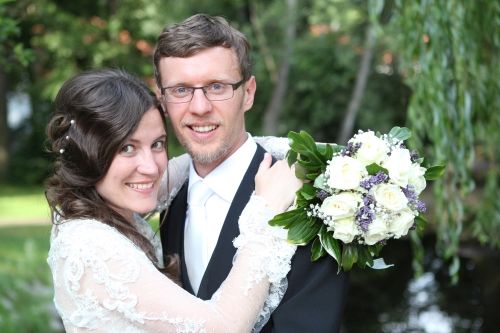 If I remember correctly, I first signed up with you sometime in 2010. During that time, I met a guy from South Africa and we started visiting each other. After a few months and a short stay in South Africa, we decided that it would not work out. I went home heartbroken, determined that this time, I would hand over my love life to the Lord and let Him decide for me. I'd had made enough wrong decisions by then.

Over the New Year of 2011/2012, I attended the Mission-Net Congress in Germany. It was my parents' Christmas gift to me, plus their mission was to be represented at the Mission Fair. I went there with the hope that God would give guidance regarding my future and that at last I would meet my future husband. I mean, there must be SOMEONE out there and what better place to look for than at a Mission's Fair?? It lasted just about 3 or 4 days. Every morning, I would go to the "Prayer Zone" for some quiet time alone with God. There usually weren't too many people there that early in the morning.

On the morning of the 1st of January, I went there again but the place was absolutely packed. All couches were taken (by guys sleeping on them!) so I sat down leaning against a wall and facing the couches. As I was lost in thoughts, pondering about the psalm I had just read, I suddenly heard a voice interrupt what I was thinking saying, "You're going to marry that guy on the couch." I thought, "Okay, either I'm going totally nuts here or the Lord is really speaking to me." I answered, "How is it possible? I don't even know him!" "And I'm not going to walk up to him and tell him that!" I added to myself. "Over the internet?" I asked God. And I just got the reply "Yes."

So I looked at the guy on the couch immediately facing me and tried to remember his features if I should see him again (I was tempted to take a picture with my mobile but decided against it). By then, the guy was awake and after a moment, got up and left. I looked after him thinking, "Naaa, not really!" because he looked a bit scruffy. I sat there thinking, when the guy on the other couch woke up and looked around. Our eyes met shortly, I smiled and he smiled back. After a while, he sat up. I remember looking at him and thinking, "Oh Lord, if he is not married yet, please give him a wife." After a while, I got up and left.

Two weeks later, back home, I was looking at profiles on Christian Cafe for a friend of mine. She was in a "relationship" with a really dodgy guy she had also met over the internet and I was trying to find someone in her area that would be a good match for her. I was shocked when I suddenly saw that my South African ex-boyfriend had put up a new profile. We had just broken up about a month ago and he was already ready to look for someone new?? I was so upset that on the spot I decided to go back too for a trial 10 days. It felt dishonest to do so, because I really wasn't looking for anyone and just thought I'd have fun meeting new people for 10 days, without being interested.

I just spit in everything on that profile. I thought, "I'm going to be so blunt and honest this time that only my potential husband will not be scared away by it." I wasn't rude, just really blunt. My first line read "If you're interested in Arabs, you interest me. If not, please pass your way, I don't want to waste my time." That sort of stuff. I got quite a few messages from guys advising me to change my profile or I'd never find someone!!

On my profile picture, you could see everything except my eyes which I had purposefully hid behind sunglasses - I didn't want to be recognized too easily by anyone I might know. The "Prayer Zone" episode at Mission-Net was out of my head by then (I mean, how slim's the chance??!) So, a couple of days in and I look at one of the guy's profile who had looked at mine. His profile picture showed nothing but his eyes. I saw that he'd been to Israel and would be interested in going to an Arabic country. That he studied Hebrew and Arabic. Okay. Noted. But I wasn't going to contact him. About three days later, I get a message from him: "Interesting profile but I'm afraid it has great potential to scare away the guys." I just laughed back in my reply that I really didn't care and that I saw he was from Germany and that I had just been there two weeks ago at a Mission's Fair called Mission-Net and whether he had ever heard of it?

Here's what he replied: "Oh, I was there too! How crazy is that?? I was the guy sleeping on the couch in the Prayer Zone on the 1st of January." A church bell couldn't have rung louder to my ears. WHAAAT??!!

Anyway, we chatted back and forth and after only about 4 responses in 6 months (he always took forever to answer!), I decided to meet that guy, see for myself and not let this drag on if it was nothing. We met in August 2012, both immediately knew that this was the "real deal" from God, though we still barely knew each other. I left for a teaching post in Paris in September 2012, so we started our relationship with one year of Skype calls almost every evening. After a year I had had enough of Skype calls and since we had already gotten engaged in November 2012 to be married in August 2014, I decided that in August 2013, when school was over, I would move to his town (not to his place, please! - we're old school Christians) in August 2013 to get to "know the fish in his own waters", his family, his culture, etc. I did not want a "marriage shock, in-laws shock, gender shock and culture shock" in one "shock smoothie". It was a very wise decision. We got married in August 2014 as planned and are still living our (mostly) happily ever after. We've even had a little addition to our family in July 2016 (THAT is perhaps the biggest shock yet!).

Oh, and if you're wondering which of the guys on the couch it was - it was the second one, the one I had prayed for that he would have a wife. ;)

Anyway, this was long, but hopefully worth it.

We wanted to thank God and you all at Christian Cafe! 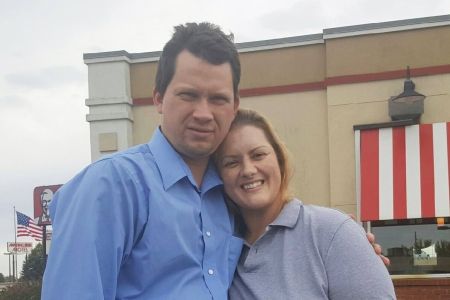 Susan and Steve were engaged on Valentine's Day!

Thank you so much again, thanking God of course too!!

[Editor's note: See June 2017 for their wedding update and photos!]

Through it I have met a wonderful man and that we are talking about marriage. It's been great and I am so excited for our future together!

My husband and I would like to thank you all for giving us the chance to meet here.

We met online September of 2012 and we met in person December of the same year. I am currently here in the US happily married for about 3 years and 3 months to be exact and we have our 20 month-old little girl :)

Thank you for this wonderful experience! We believe since we started talking online that God is and will be in control. Indeed HE showed us His mighty hand in everything. God is faithful and true to His promises!!!:)

I am such a big fan of Christian Cafe.

Please accept and pass along my thanks to you all for remaining Christian owned and not selling out. There are so many wonderful women on this site. It is a real blessing to me to be able to use your service. Please don't ever change! I am really thankful for Christian Cafe as a place to meet godly, wonderful Christian women. Please tell the whole staff what a blessing you are to all of us. May God bless you abundantly!

Take from me congratulations on your 18th anniversary!

I wish you to prosper for years to come and to please all of us with wise and meaningful articles from the Blog and Dating101! You give the ability to prayerful communion of all Christians around the world. You join Christians in a strong Christian family. You are doing a noble cause! It is wonderful that such a site we have! God bless you!