Claire, like David, had just not connected with the right person... 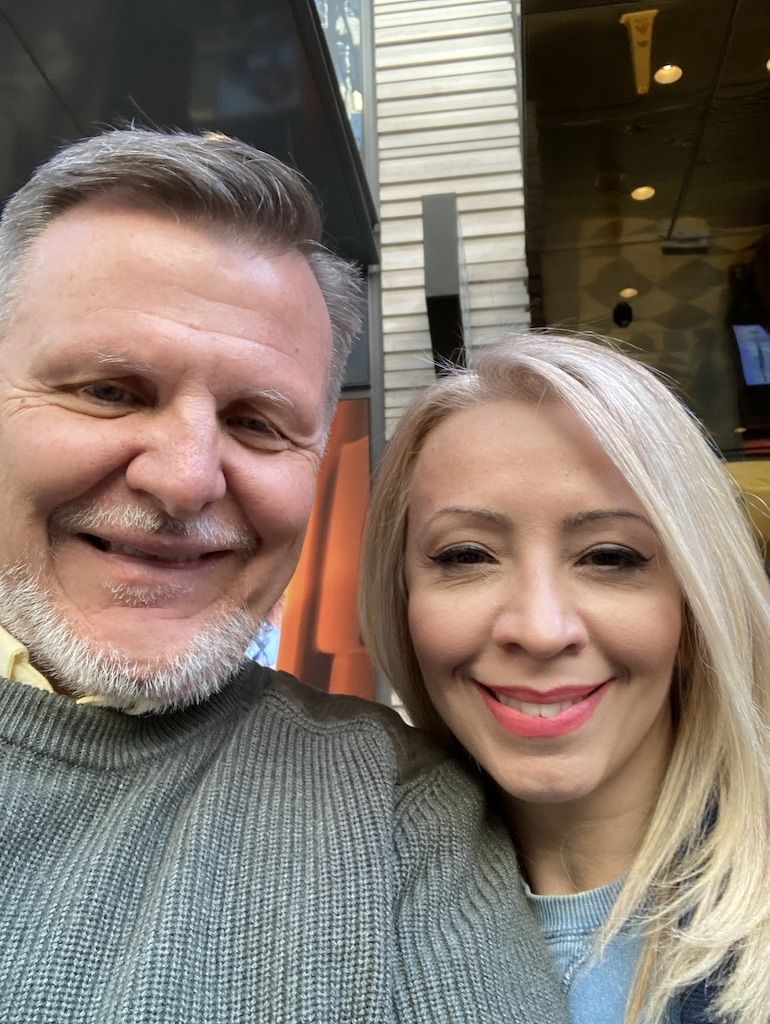 A beaming David and Claire, finally together! 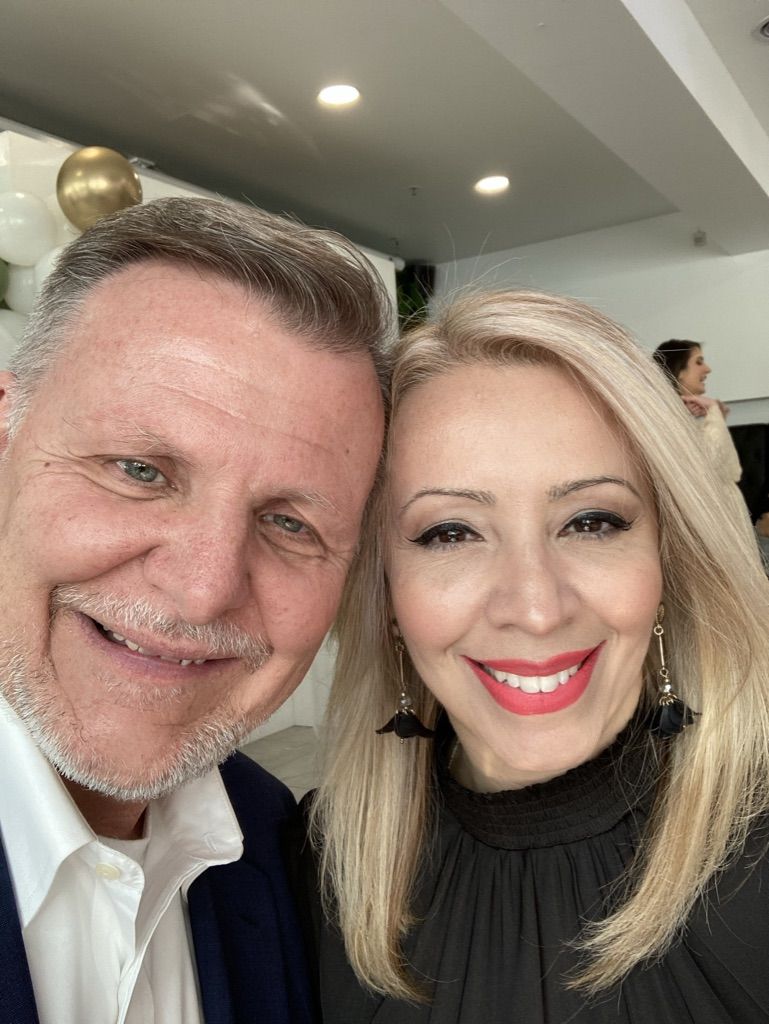 Big smiles from David and Claire! 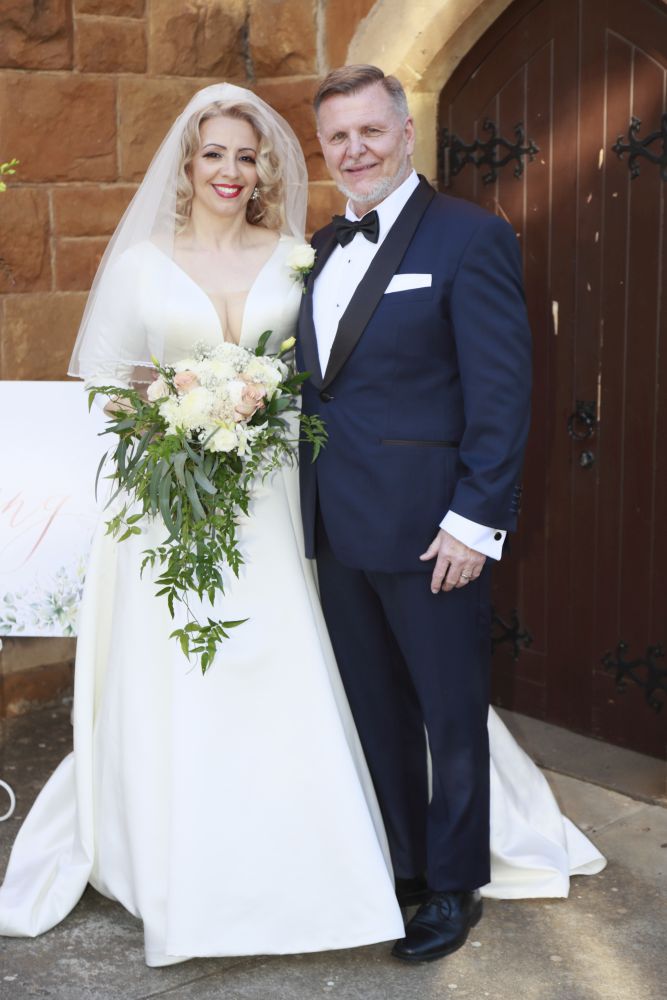 The beautiful bride and dashing groom on their special day 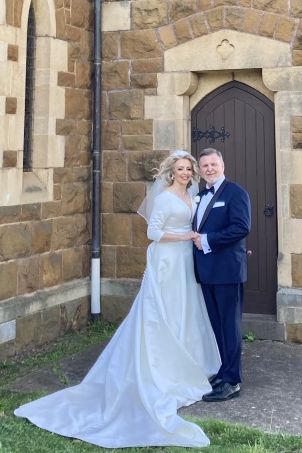 A beautiful day for wedding photos in front of the church 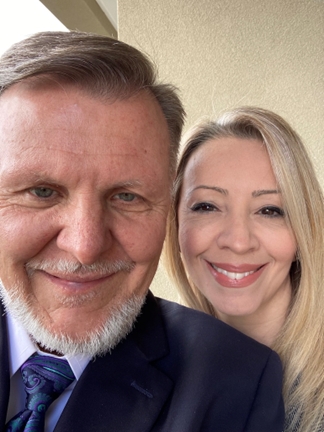 David over the moon after meeting Claire!

David, a New Jersey professor teaching history and ethics at the American University of Iraq, Baghdad had been on Christian Cafe three or four times over the last few years to no avail.

Claire, an executive in the healthcare industry in Melbourne, Australia had also given Christian Cafe a try.

Neither had connected with the right person to date.

But in early March of 2021 Christian Cafe sent an email offering both a "free weekend, C'mon and try again".

David thought no one would respond in forty eight hours, and even if they did, would lose interest very quickly when they learned he was in Iraq.

Claire had decided online dating was all but a complete waste of time for her, but she still clung to a hope of a love she dreamed of as a child and was not ready to give up on that dream.

Claire's son with Down's Syndrome even narrowed the field as she thought to herself, "How many men would be willing to help me meet that challenge?"

As morning turned to afternoon in Australia and afternoon turned to evening in Baghdad, both decided to give it one more go.

Claire's profile was hastily assembled with little detail and one picture (headshot only).

David spent an hour and cranked out a very specific and detailed account of his journey, strengths and weaknesses, and the exact woman he longed to meet. He spoke of her relationship with Christ as being the most important; but then that should be a given on Christian Cafe. He spoke of her smile, her likes, her hopes, her dreams, and how her dreams would have to come together with his.

He spoke of a partnership with Biblical values that would make him responsible for her happiness; but more, that he would need to promote, help, guide, protect, and lead her to her destiny in God.

Friday turned to Saturday and late that night David took a few minutes to search.

The picture of a beautiful face appeared. There was little information and David almost moved on when he saw she was in Australia; but then, something (really Someone) spoke to David's heart and encouraged him to say hi.

"How could this work even if she responded with her so far away?" Nevertheless, David followed the urging of the Voice that spoke to his heart, and said hello.

Thousands of miles away, Claire received a notification from Christian Cafe. She had noticed David's profile before but thought he was very detailed for a man and wanted someone that was perfect, and that someone was not her.

But when she received the message from David, something made her respond and say hi.

All day Sunday they exchanged message after message. But Sunday at midnight the carriage would turn back into a pumpkin.

David decided to sign up for a month with Christian Cafe so that he could keep the conversations going. Claire, realizing that her free weekend was about up, also wanted to continue.

Within a week, they moved to conversation outside Christian Cafe; within a month David was searching for the best deal for plane tickets to Australia!

But Australia created the most stringent lock-down COVID protocols in the world. Claire couldn't leave Australia and David couldn't get in. David flew back to the United States and visited family and friends but never missed one single day where he didn't spend time chatting with Claire.

They used the time to sort out things that some couples don't figure out for years: marriage, family, doctrinal beliefs, food preferences, how money should be handled in a family.

Time went on and the summer ended in the northern hemisphere and began in the southern. David was to return to Iraq for the fall term but before he did, he went to the jewelry store and picked out an engagement ring, and a wedding band for Claire and himself.

He flew back to Iraq where he spent another academic year teaching. Claire and David both went through having COVID, and Claire lost her dad, then her uncle, then another uncle.

David and Claire decided to double down and fasted for a season, then began taking communion and reading the scripture everyday together.

Finally, the dam burst in April of 2022! The plane tickets were bought and the wedding planned before Claire and David ever met in person.

They both knew this was the work of God and though many cautioned them, they smiled and moved forward.

On the second day of May, David passed through customs and exited passport control...and there she was! The most beautiful woman he had ever seen!

He had dreamed of this woman since he was fourteen and his dream did in fact exist. Claire jumped into David's arms and after fourteen months of waiting...he tasted the sweetest kiss humankind has ever known.

Claire was more than he had hoped for. Turns out Claire felt the same :)

And on May 15th, David almost cried as he saw her at the end of the aisle. Claire's dad was in heaven but watched as Claire's brother walked her down the aisle.

And now, finally we're together. Truly the Bible tells us, "He that finds a wife, finds a good thing!"

Thanks to the Lord who brought this all to pass and thanks to Christian Cafe for being the instrument God chose.

Too hard to pass on all the interest my profile is getting :)

All is well with us.

Very easy to use and great people on the site.

Over three years ago I met a wonderful man on Christian Cafe.

We are now planning to get married. Thank you for making it possible for us to meet!

We are happily married and the Lord is leading and teaching us a lot of things.

I found a man on ChristianCafe.com and we married 24th September 2021.

We bless you and team.

We have referred several friends to the site.

I'm happy in renewing my membership for 3 more months.

Being in your Christian site has been a blessing - not only to myself but as well to so many others.

May these keep increasing and with your nice and excellent assistance. Blessings!!!

ChristianCafe.com is magnificent and useful.

Among Christian dating sites this is, in my humble opinion, the best ever!

Good work and keep it up.

I consider ChristianCafe.com the best in the world.

I want to thank you immensely for giving me the chance to participate!

I would like to commend you all on a dating site that is user friendly and easy to navigate.

It has the ability to be very specific with search criteria.