I had decided to cancel my membership, but... 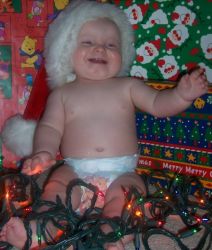 I had been a member of ChristianCafe.com for about a year, but a busy schedule kept me from taking advantage of the services. I had considered cancelling but I thought I would send out a couple of letters. One of the responses was from the one woman who a little over a year later became my wife.

For the last two and a half years we've been happily married, and this year we welcomed our jolly little elf into the world. He has been such a blessing to our lives and brings plenty of smiles to us everyday. Watching him develop really shows God is alive in our lives.

Both Malcolm and I prayed that if it was God's Will we would meet our future spouse on Christiancafe.com. 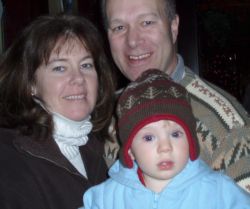 We courted (not dated) for 9 months after meeting on ChristianCafe.com. We found that both being Christians and having many similar goals and sports in common has made our marriage wonderful.

We have I Corinthians 13 as the foundation motto of our marriage.

We married in September 2003. Now we have enjoyed three years of marriage and have a one year old son together. 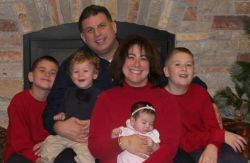 Thanks to the Lord and your website, an Iowa widow with two young sons met up with a Peruvian student at Dallas Theological Seminary.

We started talking in March 2004, met in person in April, and married on New Years Eve. Then we added two more babies to come up with the perfect picture below!

We just celebrated our 2nd anniversary and are living in Minnesota, where Carlos is an evangelist in the US and Latin America.

Thank you for being the tool that God used to bring us together to glorify Him. Neither of us remembers our usernames, so just sign us Carlos & Mali & family! 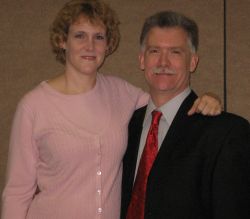 The future is exciting for Tracey and Galen!

My fiancee and I first met on the Cafe on June 26, 2006 and started talking on the phone on July 30th. That first phone call was the beginning of something wonderful.

We met face to face on August 11th. We obviously hit it off right away and are now planning our wedding for 2007.

I had been on the Cafe for about 2 years, but Tracey only started her search on June 24th.

We are learning trust again after much healing from past relationships. The future is exciting and we thank God for the special love He has given us for each other.

ChristianCafe.com is a great resource for finding that special person and we thank you for this service you provide to Christian singles. 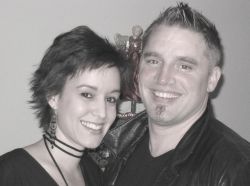 Steve never believed he could meet anyone online but Katie changed that!

My girlfriend Katie and I met on ChristianCafe.com the last day of February 2006. I never thought that I would meet someone online!

I was a little stunned that Katie lived in California and I lived in Oregon. As with everything, we both just put it in God's hands and let Him sort it out. Three months later Katie moved to Oregon and on New Years Eve I asked her to be my wife! WOW!

Just wanted to let you guys know and also say THANK YOU SO VERY VERY MUCH! 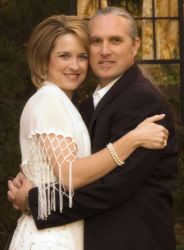 God used ChristianCafe.com to bring Lisa and Tom together

A great BIG thank you for answering God's call to bring Christian singles together in this environment.

God used ChristianCafe.com as a tool to bring us together and ultimately marry on November 4, 2006 and we couldn't wait to share the news with you!

I have met someone here, and WE feel that God has lead us together through your site.

I want to focus on this possibility, and to enjoy the blessing that this has become.

I have lived a Charlie Brown life and I am marrying my little red haired girl.

I met Renee through ChristianCafe.com and we will be married on 16 January 2007.

I do highly recommend ChristianCafe.com over any other Christian singles Internet service. I tell other singles about Christian Cafe, and some are considering signing up.

Mike is from Indiana and I am from Illinois, a 4 hour drive. We know that we never would have met if not for ChristianCafe.com, but we also know that we are soul mates!

The funny thing is, Mike is NOT computer literate at all! A friend talked him into trying ChristianCafe.com on a whim.

There were just too many things happened that seemed to be "just coincidence" and we don't believe in coincidence! It must have been God's Will.

We were married on December 8th. Thank you, ChristianCafe.com for bringing us together!

I have found and met in the Cafe the person whom I believe is my soul mate and we're planning a wedding for late 2007. We live in 2 different States, and we have visited each other a few times.

We both are praying, and taking advantage of counsel and advice from our churches individually for our long distance relationship.

My profile was attractive to Don, and he was so persistent.

My husband and I met on ChristianCafe.com. After we chatted on the site for a bit, we moved to email.

We then talked on the phone for a few weeks and finally met in April 2004, and we haven't looked back! We were married on September 16, 2006, and we want to thank you for your service.

Jason & I found each other through ChristianCafe.com early last year. We began talking to each other and the Lord has led us to grow closer each day. We have made plans to get married this year, in God's timing.

Thank you so much for allowing the Lord to work through this site. Jason and I are so happy, and can't wait to get married and have a family together. I praise the Lord for His Mercy and Grace in 2006, and for leading both of us into a wonderful 2007. God is so amazing and so faithful to those who truly believe in Him.

He is Lord! He is Powerful! He can use this site to bring people closer together, just as He led both of us.

God bless each and every one of you. Never give up on love. True love lasts forever. And I could never be happier.

I commend you on having a truly Christian site which has enabled me to find the woman that the Lord selected for me.

I had a very bad marriage the first time around and when my ex-wife left me I thought I would never find love or be able to love anyone at all.

I joined your site over 6 months ago and upon many frustrating times with life I felt there was a reason God kept me here just when I was almost ready to stop using your site.

In July 2006 I met an amazing woman. I must admit at first I thought she did not like me very much because we could not carry much of a conversation on your site or through any other means of online messaging.

Then one night after I talked her into updating her computer so we could share pictures, her computer broke and at that point I called her to try to fix it and then from the first moment I talked to her I was hooked from that moment on. I knew that This was the one God wanted for me to spend the rest of my life together.

I knew there was something about this one woman that was very special. I knew God led me to her for a very special reason. We made plans to meet in October and the more we talked the more we both began to fall in love with each other.

As October got closer I knew that this was exactly what God had been preparing my heart for. Before we met I actually bought her engagement ring.

Everyone in my family thought I was crazy but I knew exactly what I was doing and I knew I was just doing as I felt God wanted me to do.

When we first met and I looked in to her eyes I knew that She was exactly what I had always dreamed of in the perfect spouse.

I am so thankful to this site for allowing God to work in His time to bring together two people who love each other very much. I proposed on 28th. December and we have set a wedding date for 28th. July, which is 1 year to the day of when we first talked.

I thank you for giving me the Angel God has had prepared. This is definitely the kind of love that you only read about which I know is very cliche however I know that this is like no other love I have ever known.

It is by far the greatest love I have ever known next to the love that God had for us as he gave his only Son to die on the cross for our sins.

What a great service you guys provide and it works!

I am no longer a member but this is due to the fact that your site did work. I am getting married in March.

I met my fiance Alison on ChristianCafe.com in July last year. She sent me a birthday greeting just after I joined and God moved things along from there.

We will send you a photo of the wedding after we get back from the honeymoon.

I have met the love of my life through your site and just wanted to express thanks to you.

We got married in January after meeting through ChristianCafe.com over a year ago.

Thanks for bringing two soul mates together!