My husband and I met on ChristianCafe.com in 2011, and married five months later. 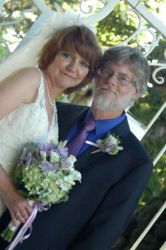 Nancy and David have been filled with love for each other for over 3 years.

Initially, I really liked the candid photo of him blowing out the candles on his birthday cake, and he responded to my first message to him very humbly, with a beautiful message. We exchanged messages for awhile before we met in person and had lunch. I told him about my hobby of flying kites, and gave him a stunt kite at our first meeting, and he told me of himself, and gave me a book that he really liked.

Five weeks after we met in person, he proposed. I have to say on here, that I was 52 years old when we got married, and had never been married, and this is my husband's third marriage. I told my parents when we told them we were going to get married that I had never been so happy before I met him. My father couldn't believe I was actually getting married, but was happy for me too.

It is difficult to be a single woman in this world, and after I graduated from high school, and entered the working world, it was very hard to meet men with sound morals, and harder still to find a Christian man, and there were many, many lonely years in my past, and even some wasted years investing my time and love in shallow relationships with men who presented themselves as "spiritual," but claimed that because of past bad relationships that they could not keep their empty promises of commitment to me.

My husband also invested himself in relationships that the women he wanted to marry did not want to commit to him following his ended marriages, and then had many lonely single years that followed.

I could not believe that none of the other women before me could not seem to recognize a "diamond in the rough", because that was what he was to me, and he is a good man and a believer. Friends and others over the years, told me that I would find a good man at church, but I never did (a single man, I mean), or that I would meet a man at work, or through work, or to just take college courses or night courses where I would surely meet nice single men, but that never happened for me even though I prayed to the Lord with all my heart for years, and was involved with the church, took courses, worked for years, and put myself out there with a loving and respectful Christian heart. I also joined a couple of other "dating sites" before leaving them and the shallow relationships they offered behind to try ChristianCafe.com.

Although marriage is not always smooth-sailing and conflict-free, it is filled with love, and I do believe that the Lord was gracious and kind to David and I by allowing us to find each other, and the way that began was on your site, and we are grateful for that.

It is never "too late" for anyone to find a good and faithful love, and there are many lonely Christians in this world. I would encourage everyone who may happen upon this testimonial to never lose hope, and most importantly, never lose faith, my friends -- When God acts as your matchmaker at the appointed time, He will not disappoint.

The idea of meeting your spouse online was a little embarrassing, if not scary.

Wrapped up in love 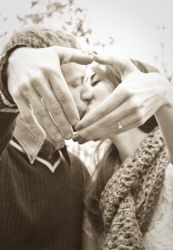 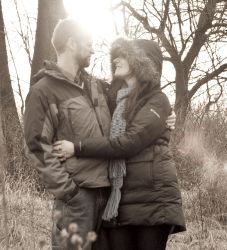 Special moment on a forest stroll

It seemed like online dating wasn't waiting on God to bring your spouse. But, at 27 years old, having never been in a relationship before, and going to a church that had one single male in it, I finally decided to take a friend's continuous advice to try online dating.

My fiance meanwhile, was having his 29th birthday as a single. He'd moved to Colorado to live near the glorious mountains, but as a consequence, was away from his family and friends he grew up with. He'd been in a few longer relationships previously, but none of them had worked out. He had turned down his dad's suggestions to try online dating before, but now he felt like he might just test the waters and see what came about.

So that's how we met: on our free trial at ChristianCafe.com, Nov. 1, 2013. We had both been Boundless.org fans and had heard of ChristianCafe.com through various ads and podcasts on their site. I considered trying a different online dating service, but when I came across the one single male from my church on there (in whom I had no interest), I immediately decided against it. So one day my fiance's profile was emailed to me as a possible match from ChristianCafe.com, and I promptly sent him a message. Not only was he one good-looking guy standing in front of some mountains, we had a lot in common. As we got to emailing back and forth, there were many things that made me feel at home with my fiance: his strong faith, his humor, his methodical brain, and just a general sensitivity, yet manliness. I didn't feel like I needed to look any further for my dream guy.

We finally met the day after Christmas. That was a butterfly-in-the-stomach day! Over the next year, I learned how to express my thoughts to him and he learned to be patient with me and believing that I did want to be with him. Now, here we are, over a year after that first message, two months away from our anticipated wedding date. We met each other's family and friends, went to the mountains and camped with friends and skied, camped and canoed in Missouri. It was a lot of fun.

Long distance is not ideal with relationships, but I can see how God used it in ours for good. I think and express myself better when I'm writing, and this gave me a chance to transition more easily. This has been a sweet time for both of us. I think we can both say with confidence that God was good to us in our singleness, and He has been good in giving us each other. He knows how to give good gifts, and we can only look back and trust His timing.

My husband and I have been blessed with 10 years of marriage. 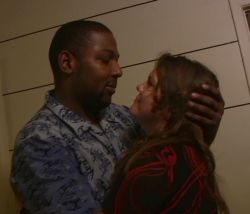 Bernadette has been married for 10 happy years.

We vow that if it were not for ChristianCafe.com we would not have met each other. It has certainly come through for us in finding each other. A life with partners who were either abusive or cheaters led to us meeting here and finding two souls so compatible and trusting of the other.

ChristianCafe.com has not let us down. We hope and pray others will meet with such love, affection and devotion as we have found over the years.

but after more than 2 decades and many disappointments it was hard to hold on. Over the years I have met many good men, but somehow nothing worked out for me. I was getting older and older.

Then, in September 2008, aged 66 (it was the year I retired from work) I met a widower called Bernard on ChristianCafe.com. We emailed for several months as pen friends before meeting up, and we remained simply as friends for quite some time as he had recently lost his wife. However, in October last year, 2014, we were married at St Martins Church in Cambridge.

Now we have bought a house together and we are having the time of our lives doing it up. We have lots of plans too for an extension as we intend to provide housing for those in need. It is very challenging sharing our lives together - I have been single for over 35 years - and every day seems like a steep learning curve. But each day we also discover something special and unexpected, it truly is a great adventure and we do bless you for your part in it.

So I should like to say to any older people like us who are looking for a new beginning, so long as you really do want it, it is not too late.

A huge THANK YOU to all the staff for your loving, professional and caring service.

I wanted to give you an update on my relationship.

I met Fanny on ChristianCafe.com, our relationship has grown in the past 2 years. This last December 19th I went down to see her in her country the Dominican Republic. I asked her to marry me and she accepted and we plan on getting married on April of 2016.

We are a perfect match. The Lord has blessed us. We looked back on this amazing journey and how the Lord can put two people together from countries thousands of miles apart. thank you for you web site.

Compared to other websites this is something special, so easy and systematic. Salute to the owners who created this with dedication. God bless you more and more with happiness and harmony in your family life.

Tomorrow is my 8 year anniversary!

We met in ChristianCafe.com in 2005 while I was living in Miami, Florida and my husband was living in Lafayette, Louisiana. He drove 900 miles to meet me in person and the rest is history. Today we live in Lafayette, LA, both serve at church and we are a blessed happy couple. God doesn't only unite marriage He unites ministries.

I met my fiancee on ChristianCafe.com in August of 2013.

We are getting married next month. I am blessed to have her in my life and I believe God used that ChristianCafe.com connection to help bring us together.

We are happily married with 1 child and another on the way. We're so blessed! Thank you!

I married someone that I met on ChristianCafe.com, back in 2010.

Thanks for your services!

I appreciate your ministry and the wonderful experience you make available to so many.

Your staff also appears second to none, as they have been prompt & courteous. You do an excellent job!

For all you good people looking for partners this is to let you know that I'm now married to wonderful woman who I have met on ChristianCafe.com. We spliced the knot just a few days ago. So Internet dating does work! If you're tempted to give up please don't. God rewards persistence and faithfulness. Your turn will come if you keep your eyes fixed on Jesus.