ChristianCafe.com Brought Us "The Love of Our Lives". 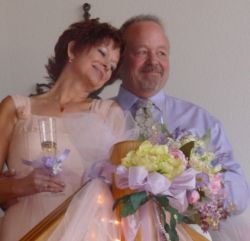 Allen and Vicki were married in 2009

Allen was separated in January 2008 after 30 years of marriage. He felt like God told him to wait until his divorce was final before he dated. He was obedient to what he was called to do. His divorce was nearly recorded in December when a friend invited him to investigate ChristianCafe.com as a potential dating site to consider. Allen was more than a little apprehensive because he'd heard some dating horror stories. He decided to check it out the day after the divorce was final and decided it was worth a try. He signed up for a free trial and posted his profile.

Vicki had been divorced for 3 years and was convinced that God would lead her to a solid, Christian man. She tried a few different dating sites, had several first dates but, met no one worth pursuing. Approximately the third week in December she received an email from ChristianCafe.com inviting her back for some free days. Feeling lonely during the holidays she updated her profile and perused the prospects in her home town in Oregon. Lo and behold that was the same day Allen signed up and his interesting profile came up in her parameters and she started a conversation with him. He was out of town visiting family for the holidays but, after a few days and many emails they were anxious to meet and he returned to town for their coffee date.

The rest is history as we say. We instantly knew we had been rewarded with "The Love of Our Lives" and who God had intended for us to spend the rest of our lives with. We married 3 months later in a beautiful ceremony at a friend's house and have celebrated five and half wonderful years together. Thanks ChristianCafe.com!

5 years ago, on my birthday, Ken and I started our first correspondence on ChristianCafe.com. 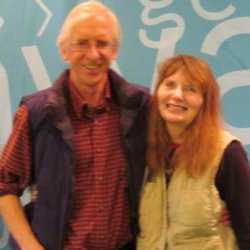 Sarah and Ken will celebrate 5 glorious years together on April 5, 2015

It wasn't long before we knew God meant for us to be together. On April 5th, 2015, we will celebrate our 5th Wedding Anniversary, Lord Willing. Ken is the sweetest, kindest, most loving, God-following man, ever. I am so blessed and thankful for ChristianCafe.com AND for God putting us together. Praise the Lord and thank you ChristianCafe.com. Happy Birthday to Me.

I intended to let you know long ago that I met my husband back in 2009 on ChristianCafe.com.

We married August 2010 and are very happy. I will always be so grateful for your website.

I met my husband on ChristianCafe.com.

Thank you for your site.

I'm married. It worked thanks!

Thank you ChristianCafe.com, I found the love of my life.

We met on ChristianCafe.com and have been married for 11 years with two children.

I recently got married to a girl I met on ChristianCafe.com!

I recommend your site to many people!!!

Your site is inexpensive which has appeal for those of us who have been searching a long time.

I had been a widow for 11 years when I met my husband on ChristianCafe.com.

We had both lost our spouses to illness. We immediately "clicked" and began corresponding, then talking for long hours on the phone, and finally we met (I lived in California and he in Washington state). We will have been married for 7 years in March! Thank you ChristianCafe for the love of my life and a very full and happy life!

Thank you for your design of in depth information that helps to know someone before even contacting them.

5 years ago this past Sept. I was on ChristianCafe.com and lived in Michigan. After conversing with 3-4 very nice ladies in different parts of the country, I happened to receive a contact from my now wife. We conversed by e-mail for a month and then started by phone until Dec. around Christmas time. I flew out to the San Diego area and met with my now wife for the first time. After continued intense conversations by phone, etc. we decided to marry. I took the next step of selling most all my possessions and my properties in Michigan and my wife came to Michigan where we were married on Mar. 28th 2010. We then located to California and we have been happily married. Coming up this March 28th 2015 will be 5 years and we agree that ChristianCafe.com is the best site there is to meet true Christians.

P.S. We are retiring come June of 2015 and will be traveling together and serving Christ in any way he calls us to.

My wife, Tami, and I met on ChristianCafe.com in October of 2003. This December 18th we will celebrate our 10 year anniversary. The best 10 years of my life!!!! God bringing us together through ChristianCafe.com was truly an awesome blessing for both of us.