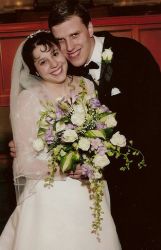 Margaret and Jason have been happily married for over 2 years

My wife and I met on ChristianCafe.com on Valentine's Day, 2004. I was living in Maryland and my future wife was living in New York.

We were married in May 2005 and have been happily married ever since.

Thank you for making your site available to us.

We wouldn't have met if not for ChristianCafe, as my husband and I lived in different cities at the time. 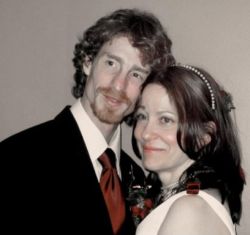 We just want to thank ChristianCafe.com so much for bringing my husband and me together. We met online September 2006, and met in person October 2006. We were married December 23, 2006.

God bless you all!

I was very skeptical of online relationships. 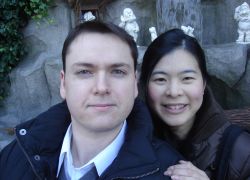 Matt's skepticism melted when he connected with Afiani! 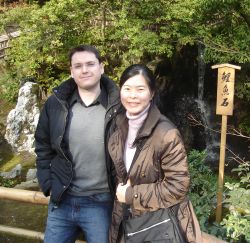 Matt and Afiani will be married in Japan this summer

Dear ChristianCafe.com, I write to share my story and to thank you. I tried your website in July 2006. Within just a few days I met a woman from Japan named Afiani.

At first I thought it would be great just to chat with someone from a different country. The more I talked to Afiani, the more I began to see that we had a lot in common and how much I enjoyed talking with her.

When she asked me if I would be interested in visiting Japan and meeting in person I agreed. I flew to Japan in September and we spent the next few days sightseeing in Tokyo.

I had a great time seeing Japan, but it was Afiani's personality and warm spirit that greatly impressed me during that trip. I already knew I liked her from our chats before the trip, and meeting in person confirmed my feelings about her.

I could not believe I had met such a wonderful person.

Before I left I asked Afiani if she would be interested in having a long distance relationship. After coming back to Canada we kept in touch daily through emails, Internet chatting and phone calls.

Our relationship grew into a deep love and appreciation for each other other despite the distance between us. I began to see our relationship as a wonderful gift of God and I knew I wanted Afiani to always be a part of my life.

I went back to Japan for a three week Christmas vacation. During a trip to Tokyo Disneyland I proposed. We are planning to wed in Japan this summer and are looking forward to starting our life together in Canada. I will post our wedding photos after we are married.

I hope my testimonial will encourage any Christian looking for a partner to trust God to provide them with the right person. It requires some patience but the result is having God fulfilling your very desires and giving you a partner that you have always dreamed of having.

It has happened to me with the help of this wonderful website.

Once again thank you and God bless.

Our lives haven't been the same since joining Christian Cafe

Jenn and I met in September 2006. I was living in Atlanta, Georgia and she was in school down in Savannah, Georgia.

I sent Jenn several Cafe Quick Messages, and she replied. Within just a week of knowing each other, I flew down to meet her for the first time.

After only 2 months of dating, Jenn transferred schools and moved up to Atlanta. On June 11th, 2007, I flew down to Florida while she was on vacation with her mother, surprised her on the beach with a beautiful diamond ring, and asked her to spend her life with me.

You can meet your soul mate on ChristianCafe.com. The Cafe worked for us and it can work for you as well!

Another success story for your site! 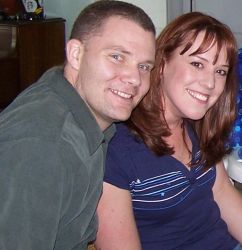 Lisa has found what being loved truly feels like, through Chris

Chris and I met in December 2006 through ChristianCafe.com. My ex-husband had unexpectedly left me for another woman in 2005 when I was pregnant with our son.

I was at the point where I didn't think there would be any guy out there who would think of loving both me and my baby. But God proved me wrong!

He brought me Chris, who had also been through a divorce. Although neither one of us was looking for a serious relationship at the time, God showed us that's what He wanted for us.

Chris has shown me what being loved truly feels like and has supported me, encouraged me, and helped me grow through many rocky times. I have not only found a soul mate, but someone who loves my son as his own!

We are a perfect fit and we thank you for bringing us together. We plan to get married next spring.

Thank you for bringing my love into my life! 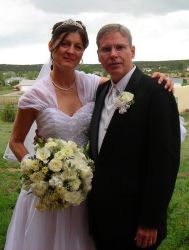 Dana and Dave are happy and blessed! 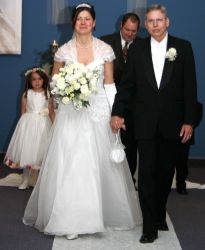 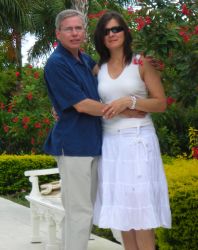 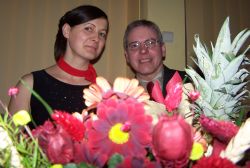 I want to thank ChristianCafe.com for bringing my husband and me together.

I am from Romania and my husband, Dave, is from New Mexico. We met on this site in December 2005 and corresponded by email every day since then.

I discovered a wonderful man, even before we met in person.

Dave came to meet me in Romania in June 2006 and it became very evident to both of us that God brought us together using ChristianCafe.com. I said: YES at his proposal and we had an engagement ceremony in my home Baptist Church, and then we started the long process with the visa.

But the Lord worked wonderfully and in April 2007, I could arrive in America to be with my fiance.

We promised each other to love and cherish until death, in front of the seen and unseen witnesses, on 19 May 2007, in Dave's church.

We are at the beginning of a new life, we are happy and blessed, and we are sure that God has brought us together from so far away, by using you. We want to thank you for that and may our Lord richly bless you!

We would never have met each other without your service.

My wife and I met through ChristianCafe.com. I am British and she is Romanian, and we have just got married.

Thank you very much for this awesome and wonderful site. It WORKS!

My husband and I met here on November 26, 2004, then we started talking by phone. I was in Marianas Island and my husband was in Missouri.

We both flew to San Diego, California and met in person. It was GOD's ordained time and confirmation that we were meant for each other.

Praise GOD! He is ever faithful and true to His word! Again THANK YOU and the Lord bless your website. May God use it more for His glory.

I think you have a great website as far as the design.

I can't think of anything I would change really, and that's pretty good cause I can be critical about things!

I have met the Angel of my search after all these years and with my first visit to your site.

It was a wonderful experience using your site. As soon as I had saved the profile a photograph came up on my screen of a young lady whom I did not know.

I had not done any search or put in any age preferences, but this smiling face popped up on my screen. Her name is Sue, and I started to communicate with her.

Eventually, we moved to phone. We talked for about 45 minutes and then she said: "This is no good, we have to meet." So we met for our first date on April 11th 2007 at a cafe in League City.

As soon as I saw Sue I was in love. We had that magical connection and that aura of: "This is our space, do not interrupt."

We talked and talked until our food went cold and we only ate half of it. It was then time for me to go to work as I was on night shift.

That drive to work, well I was driving on pure instinct as I could not get Sue out of my system. We had that magnetism and before long we were seeing each other every day.

Sue's birthday was on the 26th May and we had a celebration at a restaurant in Kemah with her family and Guess What Happened! I proposed to her and she said Yes.

We are planning our wedding sometime in the fall of 2008, probably August, then a honeymoon in England where Sue will meet my side of the family. Yes I am English and am going to have an American Bride.

We are so happy so I just want to say Thank You. We both believe that God had His hand in our meeting, and we will give thanks to Him on our Wedding Day.

Yes ChristianCafe.com does work. I had waited nearly 20 years to find the right young lady. Now I have met her and we are going to be together for the rest of our lives.

Neither was sure that God could really move through a Christian singles site, but both decided to try, after all what could they lose? At the least, maybe they would find a good friend to chat with during those lonely hours when sleep would not come.

How surprised donna118 was when late at night, as she was searching for someone to talk with, redeemed552 sent her a Cafe Quick Message. They chatted until the early morning hours.

After a few days, they exchanged phone numbers, and over the next few months, each was praying for enough money to pay the phone bills!

Needless to say, it would be much cheaper to meet for coffee somewhere, so they agreed on a public meeting place.

Now, here's where the story gets good! donna118 got lost along the route, and had to call redeemed552 and explain to him that she had no idea where she was.

redeemed552 told her to stay put, he would find her, and in about 20 minutes, donna118's Knight in Shining Armor, redeemed552, drove up, swept her up in his arms, and rescued her from the busy Interstate.

donna118 knew from that moment, that David, redeemed552, was the man God had chosen for her. David was everything that she had been praying for (Yes, she had made a "list" for God and had placed it in her Bible).

Also redeemed552 was in love with her the minute they met. He had been praying a specific prayer, and God had answered it that day!

That was five years ago, and donna118 and redeemed552 have just celebrated their fifth wedding anniversary. They have a marriage that many long for, and few find.

God has blessed them so abundantly, that they cannot contain the happiness and joy they have found in each other.

Thank you for making a way in which God can move and bring love and happiness to those of us who were broken and empty. God Bless you!

Together for a reason,

I am happy to report that I am now a married man.

I met my wife on ChristianCafe.com two years ago and we were married May 19, 2007.

We are over 60 years of age, but we have each found a new youth in our lives.

just wanted you to know that I have met someone through ChristianCafe.com.

Our relationship is becoming very serious and I want to thank you and your site for enabling us to meet.

We were about to give up on any relationship with someone romantically due to bad past experiences until we started to communicate, and our relationship escalated into something beautiful and exciting.

Thank you again for making this possible.