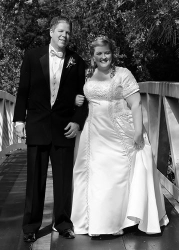 Dan and Jana, happily married since 2008!

My husband and I met on ChristianCafe.com in 2003. We met shortly after talking on the phone.

We were married in 2008 and have been happy ever since. We both love the Lord and are so grateful to His graciousness and love for bringing us together.

Being born again at the age of 30 in 1992, I soon began looking for a Christian wife. 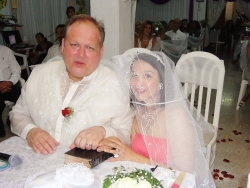 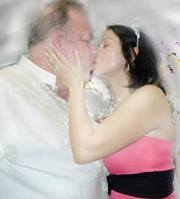 Marta is so glad Rob waited for her! 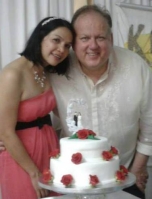 An elated Rob poses with his wife Marta

Twenty (20) years later, I finally found her, her name is Marta and I found her on ChristianCafe.com. We met online in February 2012 while I was in England and she was in Cyprus. We exchanged messages back in forth a few times but nothing happened. We went our separate ways and I then moved to Germany.

We became friends and then we began to study God's word and share devotions together. "My Utmost For His Highest" By Oswald Chambers. That was our favorite devotion.

In January 2013 I conveyed my feelings to Marta, I told her that I loved her; a month later, she said she loved me. Here is the craziest part of all! We both wanted to get married, yet we hadn't seen each other in person.

So I met Marta on May 17th 2013 and we were married on May 23rd. I don't recommend for others to do it the way we did, but we know it was the way for us. How did Marta and I know this? Well, we had peace every step of the way as we moved forward. And when I met her for the first time, well, she exceeded all my expectations. Because God had given us His love so that we can love each other according to His will and His way.

A tale of 2 skeptics. 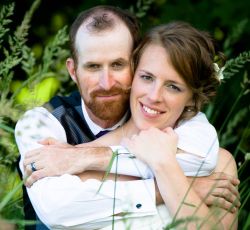 Tara and David were skeptical but found success through ChristianCafe.com

THANK YOU!!! For being a channel for God to work in bringing couple's together. I can say without a doubt that God used your site to bring me and my now husband together after waiting 31 and 35 years each, respectively.

Both of us were ready to call it quits and become a nun/monk... seriously. I truly believed online dating was a bad idea - like how could you really know someone that posted things about themselves online? It was too far fetched for me.

Fast forward to June 2012 and after A LOT of coaxing and encouragement from friends to join, I buckled. Within a week of being on your site, I met Dave and we started emailing.

Within a month and a half we met in person and by the second meeting I knew he was 'the one'.

God works in weird, wacky, mysterious and marvelous ways! Dave had tried [another dating site] twice before, but after getting dumped in an e-mail, he had had enough! Then one day you emailed him with a free trial to your site. He signed on with little hope, and in the same week so had I! I figured with us being a province apart, it was doubtful to work, but Dave was persistent and flew out to see me twice a month.

Within 6 months we were engaged and within 10 months we were married! Our wedding was June 9, 2013, and we feel so incredibly blessed to have found each other through your site.

Thanks again for all you are doing and I pray God uses your site for many more future happy couples to come!

I wrote to you over a year ago with a testimonial story of how I met my now wife. 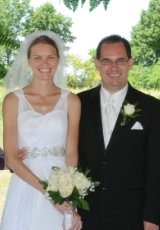 Brian and Amy will be celebrating their 1st anniversary

I was the skeptical type and was not even interested in trying online dating for myself, at first.

I created an account on your site in October 2010. My sister and I had started to help my mother create an account, but she decided she didn't want to follow through with it. My sister then convinced me to give the free trial a chance, and I listened to her - mostly out of curiosity, I think.

Well, during that free trial, I happened to come across the profile of a guy with the username atlbravesfan. It caught my attention right away as I am a huge baseball fan, and my sister and I had just caught a Braves game during a recent vacation to Atlanta.

According to his profile, the Braves fan was from Florida and was "not willing to relocate." Being from Illinois, I didn't think anything of it, because I had no expectations of really meeting someone during this free trial anyway (I had never even been to Florida!)

But God had a different plan. We really hit it off as we got to know each other better over the next few days through your site. Craig, the Braves fan, had JUST paid to become a member and I was using up the final days of my free trial. We decided to pursue this friendship.

I'm so thankful that we did, because as we continued to communicate back and forth, we found we really had a lot in common! Especially having been raised in two different parts of the country. From there we started talking with each other on the phone and online often before deciding to meet on New Year's Eve of that year.

We became an "official" couple that night 12/31/10 and have been going strong ever since! We continued our long distance relationship as we were both finishing college in our respective states. He graduated in August 2011 and moved up to Illinois so that we could experience what it was like to live near each other.

It was fantastic! He was able to live in Illinois for about four months before getting a job back in Florida. So we continued our long distance adventure while I finished school. I graduated in May 2012 and moved to be near Craig in Florida soon after - putting an end to the long-distance part of our relationship once and for all!

What a great blessing!! We were married November 23, 2012 and are so excited to live out a Godly marriage and see what He has in store for us!

Your site allowed God to bring me and my husband together and I cannot thank you enough!! Although having a long-distance relationship was very difficult at times, it forced us to have to communicate and do it well!

I think that was so vital, because we were really able to establish a deep trust and connection with each other, as opposed to being distracted by just doing things together (going to the movies, eating out, etc.) like other couples might be.

Also, we are able to remember what it was like to be apart for so long, and appreciate being able to be together that much more! We have a very loving, trusting relationship and I attribute that to God's goodness and the fact that we endured through the distance.

Thanks again for your part in bringing us together!

My wife, Carolina, and I met on ChristianCafe.com back in late 2009.

We want to express our grateful thanks to ChristianCafe.com, the channel where God has used to help us meet each other over 10,000 miles apart!

We meet in Dec 2009 through ChristianCafe.com and got married in Dec 2012, after 3 years of correspondences, meetings and online chatting. The groom is a Caucasian widower, the bride a single Asian lady. We marvel at how our Lord Jesus brought us together through the work of ChristianCafe.com.

Thank you dear ChristianCafe.com for your good work and ministry to link up genuine fellow Christians. We also want to thank our Lord and Saviour Jesus Christ who had loved us and answered our prayers for a life partner to love, be a companion with, to cherish and care, to share common interest and serve as a couple in His kingdom's work.

We got married after three years of correspondences, meetings of families & friends and each other's churches, lots of sharing in devotions and studying the Bible together, praying and doing things together.

We had lots of fun each time we were together and the Lord blessed our times together. We love to give Him the glory through testimonies of His work and goodness through our lives and our marriage. All this time we kept ourselves aligned to our Lord's teaching and word on our relationship.

We got married in Dec 2012, in an Anglican church in New Zealand and held our reception at a Vineyard.

Our wedding was very beautiful and brought tears to the eyes of some of our guests. We had many compliments and our guests said that it was such a lovely wedding and one that they would not want to miss. Our friends and relatives came from different parts of New Zealand, and some flew in from Asia and Australia.

The day of the wedding was blessed with a cool and clear sky and all our guests had a very good time at the service, reception and speeches and just being part of the whole celebration.

We give all our praises to none other than our Lord and Saviour, Jesus Christ. We also want to thank all of our relatives and friends who helped us in our wedding and those few who had been with us in our journey together. We also remember each other with thanksgiving that through our faith in our Lord, love for each other and perseverance to believe the best of each other we have this testimony today to share with the world. We pray we will always remember to love and nurture our marriage daily to make it grow from strength to strength.

We intend to continue to keep our Lord's ways central and focal in our marriage and to honour Him as a couple. We are very thankful to our Lord for bringing us together and we want to tell the world that Jesus is alive, He answers prayers and He wants to bless us!

I'll be marrying the guy I met in ChristianCafe.com.

I want to say thanks to God and thanks for ChristianCafe.com. I'll be married next weekend. I'm so glad :)

[Editor's note: See June 2014 testimonial to find out how the first year went!]

God's blessings to Sam, the Cafe staff and their families!

I have been meeting people online for 15 plus years hoping to find the one very special lady of God He has been preparing for me.

In that time I have tried almost every Internet singles site that claimed to be Christian. Sadly only a few are truly Christian, operated by true Christians on Biblical principles and dedicated to providing their members the very best place to meet quality Christian Singles.

ChristianCafe.com stands head and shoulders above the rest. It was created by and operated by true Christians. A heart felt Thank You to Sam Moorcroft, his family, the Cafe staff and their families for "Christian Cafe" The Best, Safest Place on the Internet to meet quality Christian Singles from all around the world!!

The reason I left ChristianCafe.com:

I met a lady at your site! Corresponding with her and will visit her in Philippines in August. It looks likely we will marry so thank you for all your help. Best wishes in Christ.