We would love to encourage singles in their journey! 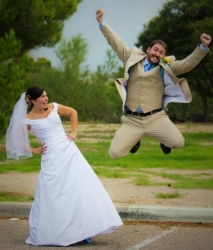 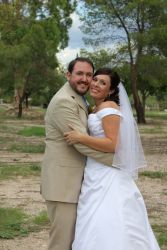 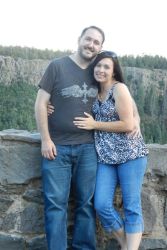 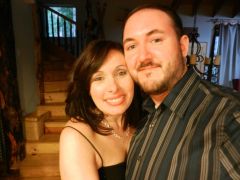 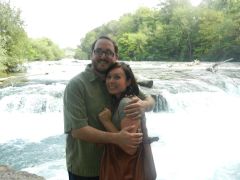 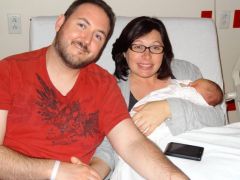 Jeff and Lauren proudly show off their "Cafe Baby"

We never truly expected to find love online and it wasn't really the route we wanted to go, but when you see the same people at church and work everyday it can really limit finding a relationship.

We know God used ChristianCafe.com as an avenue for us to meet! We lived in the same town and worked for agencies that contracted with each other but had never met each other.

We're happily married and God can use the Internet like he can use anything. It's funny how many people I know were skeptical when I signed up online at ChristianCafe.com and since I met my husband on there...they signed up for accounts! My sister and mother included.

I gave birth to our first son in September 2012 [editor's note: yet another Cafe Baby!]. We are truly blessed and are loving life together!

For many years we had desired to find spouses who also wanted to be in full time ministry and are excited to have found partners who have that same heart! We are looking forward to a life of adventures together!

My name is Della {now age 60} and my husband Don {now age 62} and I became acquainted on ChristianCafe.com in August 2003 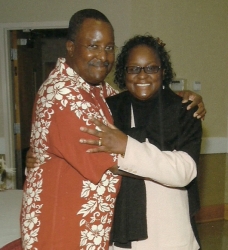 Don and Della, still blessed by God after 8 years of marriage!

We met and got married September 2004 and I sent in a testimonial in November 2005 of our status. I am writing you again to give a testimonial of how a relationship started on your site is still continuing and growing stronger. On September 18, 2012 we celebrated 8 years of marriage. We are still serving God and doing well.

We are still living in Alabama though not in the same location. We tried to build our "dream home" {2600 sq ft main level and 2400 sq ft basement} in 2006 with a construction loan. That didn't work out, contractors messed up the house and then walked away from building it. The house was finally finished in April 2007 but we never got to live in it. We lost the home and land but we prayed through the disappointment and kept on going.

We lived in my double-wide during and after the building project ended. It caught on fire {electrical fire} in 2008 and we had to move to a two bedroom apartment in a town ten miles away. I had excellent credit prior to our marriage and losing the house and credit purchases done for items on the house, destroyed my credit and savings and then losing the double-wide to a fire was tough.

But we prayed through the disappointments and kept on going. My husband's health deteriorated from the stress of working on and then losing the house {yes, we end up having to do some of the labor ourselves} and he ended up having open heart surgery {his second} in 2009 {he was sick with other illnesses during that time but the most major was the open heart}. Because of complications he went into the hospital on August 25, 2009 and did not return home until December 10, 2009. A great deal of that time he didn't know who or where he was. But we prayed through the ordeal and kept on going.

We've made it through the loss of his mother in Philadelphia, August 31, 2011, my sister-in-law, Nov 11, 2011 and my brother, May 2012 in Alabama. Yes, we've had some ups and downs, as any couple does no matter how they met. But God has brought us closer through the trials and made us stronger.

Since ChristianCafe.com is a website for single Christians, they need to know that they can meet and remain with their Boazs and Ruths if they trust in God. A couple can make it through anything if they turn to God with their issues because if you keep praying God will bring you through whatever you're facing. 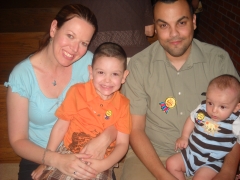 Kellie and Jon with Jamie and Kaden 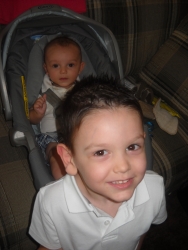 Big brother Jamie happy to have a baby brother 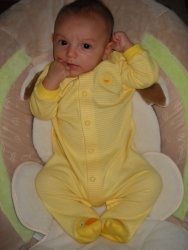 and this year added another "Cafe baby" to our little family....still going strong and making a happy marriage and enjoying life with our two little boys, Jamie, 3, and Kaden, 8 months.

They love each other and it's just so special to see them grow together. Thanks again! :-) 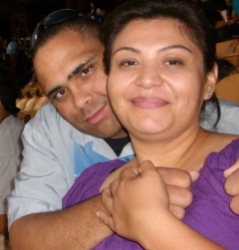 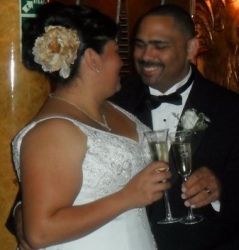 With never the thought of dating or finding someone new I was determined that the only thing in my life was to raise a man and not necessarily be with one.

My friends and family have always known me well enough to know that deep down inside I did believe that the Lord would bring me someone along the way.

With that said my best friend and Bible study buddy created my profile on ChristianCafe.com. I went along with it and prayed really hard that if in fact God was going to send me someone it would be during this free trial.

I had been hearing everyone in my Bible study how when they met their spouse "they just knew" that was the person they would spend the rest of their lives with. All I thought was, how beautiful to have that much faith in the Lord.

My third day in I received his wink. I saw his picture and read his profile. I knew he was my husband. We met May 2010, he flew down to Southern California and asked me to marry him. We were married October of the same year. I found my best friend, my lover and the man that is taking this walk of God with me for the rest of my life.

Had it not been for ChristianCafe.com we would never have met. Same state but two different worlds. The only thing we had in common was our faith.

Thank you ChristianCafe.com for working with God's grace and connecting so many couples.

We were both living in Illinois at the time, about 20 miles from each other. Thank you ChristianCafe.com for matching us...perfectly.... 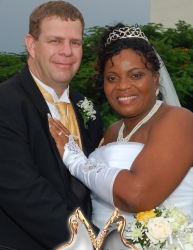 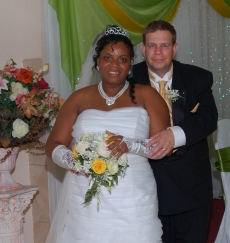 Veron and Merlin married in September in Jamaica 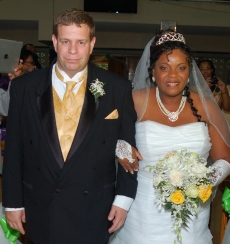 Veron's prayer for a perfect husband was answered

Being over 40 years old and in the church for over 15 years I was so lonely and I prayed and asked God to give me that perfect husband. Thank God ChristianCafe.com just popped up in my page and I couldn't resist but to access it.

My partner and I started corresponding January 15, 2012. He was from the USA and I am from Jamaica, but love has no distance. We kept connected all night long - sometimes we talked for over 24 hours. We never seems to get tired of each other.

Our love grew stronger, so I decided to meet with him face to face on April 04, 2012, of which I did without fear, as my husband and I are strong believers in Jesus Christ and knew that this must be God's movement.

Our meeting went well, I spend two weeks in the USA and it was the best two weeks of my life! We continued to correspond and our relationship grew stronger. My husband proposed to me and I accepted.

We have attached three pictures of us taken on our wedding day. We are truly appreciative of your website and are so happy that we met through ChristianCafe.com and would like to encourage you to continue to keep up the good work.

May God continue to bless and keep you guys always.

I got on ChristianCafe.com for the free 10 days not really expecting anything to turn up

but I met the most gorgeous woman who is soon to be my wife on October 13th. Rose lived in Nebraska and I live in Illinois.

I happened to see her on your site and though she was really cute and sent her a wink she sent me a message back asking me to fill out my answers and we started emailing each other.

We soon found we were just right for each other and met in the spring of 2012, and got engaged this summer. Now she is soon to be my wife this fall, but we would never have met if it had not been for ChristianCafe.com, so thank you.

My husband Mark & I met through ChristianCafe.com almost 3 years ago.

We have been married for a little over two. It was so neat to find a man that loved God as much as Mark does.

We lived far from each other...7 hours. Soon this proved to be no obstacle and now he is retired and living up here in the bay area.

Have to thank ChristianCafe.com for policing the site for "safe" people and for providing a place for Christians to meet one another.