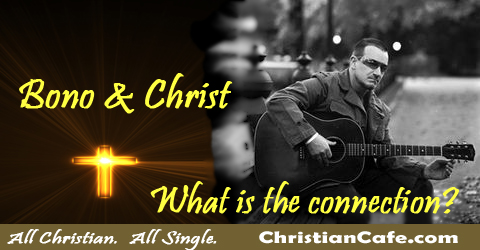 Back in 2006 in the book “Bono, In Conversation with Michka Assayas”, Bono openly talks about Jesus and what Jesus means to him and who He was. Later on you will read another insert with Jim Daly (from Focus on the Family).  This is a great way to evangelize youth and young adults using the words and beliefs of a great singer and humanitarian.

This wasn’t the first time Bono “came out” as a Christian, as their songs have frequent Biblical content and themes. It is quite inspiring to hear the lead singer of U2 talking about Jesus and what He has done for us all. These are inspiring interviews and are worth duplicating here. Please leave your comment below, and let us know how Bono’s words inspire you.

Here are some inserts from the interviews and what Bono had to say about Jesus:

Bono: My understanding of the Scriptures has been made simple by the person of Christ. Christ teaches that God is love. What does that mean? What it means for me: a study of the life of Christ. Love here describes itself as a child born in straw poverty, the most vulnerable situation of all, without honor. I don’t let my religious world get too complicated. I just kind of go: Well, I think I know what God is. God is love, and as much as I respond [sighs] in allowing myself to be transformed by that love and acting in that love, that’s my religion. Am I a Christian?
Where things get complicated for me, is when I try to live this love. Now that’s not so easy.

Assayas: What about the God of the Old Testament? He wasn’t so “peace and love”?

Bono: There’s nothing hippie about my picture of Christ. The Gospels paint a picture of a very demanding, sometimes divisive love, but love it is. I accept the Old Testament as more of an action movie: blood, car chases, evacuations, a lot of special effects, seas dividing, mass murder, adultery. The children of God are running amok, wayward. Maybe that’s why they’re so relatable. But the way we would see it, those of us who are trying to figure out our Christian conundrum, is that the God of the Old Testament is like the journey from stern father to friend. When you’re a child, you need clear directions and some strict rules. But with Christ, we have access in a one-to-one relationship, for, as in the Old Testament, it was more one of worship and awe, a vertical relationship. The New Testament, on the other hand, we look across at a Jesus who looks familiar, horizontal. The combination is what makes the Cross.

It is all about Grace

Assayas: I think I am beginning to understand religion because I have started acting and thinking like a father. What do you make of that?

Bono: Yes, I think that’s normal. It’s a mind-blowing concept that the God who created the universe might be looking for company, a real relationship with people, but the thing that keeps me on my knees is the difference between Grace and Karma.

Assayas: I haven’t heard you talk about that.

Bono: I really believe we’ve moved out of the realm of Karma into one of Grace.

Assayas: Well, that doesn’t make it clearer for me.

Bono: You see, at the center of all religions is the idea of Karma. You know, what you put out comes back to you: an eye for an eye, a tooth for a tooth, or in physics; in physical laws every action is met by an equal or an opposite one. It’s clear to me that Karma is at the very heart of the universe. I’m absolutely sure of it. And yet, along comes this idea called Grace to upend all that “as you reap, so you will sow” stuff. Grace defies reason and logic. Love interrupts, if you like, the consequences of your actions, which in my case is very good news indeed, because I’ve done a lot of stupid stuff.

Bono: That’s between me and God. But I’d be in big trouble if Karma was going to finally be my judge. I’d be in deep s—. It doesn’t excuse my mistakes, but I’m holding out for Grace. I’m holding out that Jesus took my sins onto the Cross, because I know who I am, and I hope I don’t have to depend on my own religiosity.

Assayas: The Son of God who takes away the sins of the world. I wish I could believe in that.

Bono: But I love the idea of the Sacrificial Lamb. I love the idea that God says: Look, you cretins, there are certain results to the way we are, to selfishness, and there’s a mortality as part of your very sinful nature, and, let’s face it, you’re not living a very good life, are you? There are consequences to actions. The point of the death of Christ is that Christ took on the sins of the world, so that what we put out did not come back to us, and that our sinful nature does not reap the obvious death. That’s the point. It should keep us humbled. It’s not our own good works that get us through the gates of heaven.

Jesus the Messiah, the Son of God, isn’t that farfetched?

Assayas: That’s a great idea, no denying it. Such great hope is wonderful, even though it’s close to lunacy, in my view. Christ has his rank among the world’s great thinkers. But Son of God, isn’t that farfetched?

Bono: No, it’s not far fetched to me. Look, the secular response to the Christ story always goes like this: he was a great prophet, obviously a very interesting guy, had a lot to say along the lines of other great prophets, be they Elijah, Muhammad, Buddha, or Confucius. But actually Christ doesn’t allow you that. He doesn’t let you off that hook. Christ says: No. I’m not saying I’m a teacher, don’t call me teacher. I’m not saying I’m a prophet. I’m saying: “I’m the Messiah.” I’m saying: “I am God incarnate.” And people say: No, no, please, just be a prophet. A prophet, we can take. You’re a bit eccentric. We’ve had John the Baptist eating locusts and wild honey, we can handle that. But don’t mention the “M” word! Because, you know, we’re gonna have to crucify you. And he goes: No, no. I know you’re expecting me to come back with an army, and set you free from these creeps, but actually I am the Messiah. At this point, everyone starts staring at their shoes, and says: Oh, my God, he’s gonna keep saying this. So what you’re left with is: either Christ was who He said He was the Messiah or a complete nutcase. I mean, we’re talking nutcase on the level of Charles Manson. This man was like some of the people we’ve been talking about earlier. This man was strapping himself to a bomb, and had “King of the Jews” on his head, and, as they were putting him up on the Cross, was going: OK, martyrdom, here we go. Bring on the pain! I can take it. I’m not joking here. The idea that the entire course of civilization for over half of the globe could have its fate changed and turned upside-down by a nutcase, for me, that’s farfetched.

Was Jesus really who He said He was?

Bono: If only we could be a bit more like Him, the world would be transformed. When I look at the Cross of Christ, what I see up there is all my s— and everybody else’s. So I ask myself a question a lot of people have asked: Who is this man? And was He who He said He was, or was He just a religious nut? And there it is, and that’s the question. And no one can talk you into it or out of it.

In another interview with Focus on the Family, Bono describes Jesus with simple but powerful insightful words on Who Jesus really was:

Bono: “When people say “Good teacher”,”Prophet”, “Really nice guy”, this is not how Jesus thought of Himself. So, you’re left with a challenge in that, which is either Jesus was Who He said He was or a complete and utter nut case and I believe that Jesus was, you know, the Son of God”.

Such great words from a man like Bono. His simple insights, his faith, and the spreading of the Gospel through media makes us wonder how many came to God by his display of faith and simplicity.

Please leave your comments below and share your thoughts on famous people and their ability to spread the Gospel with their testimony about Jesus Christ.

A couple of other famous celebrities that you may not know were Christians:
Alice Cooper
MC Hammer

4 comments on “Bono & Jesus: they go well together” Add yours →