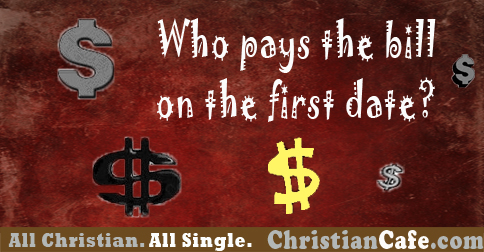 When the bill comes, who should pay it on a first date? Most men feel they should but some women don’t feel comfortable letting men pay on their initial date. What is the sensible thing to do? Is going “dutch” on a first date ok?

Dear Jim: Do you have any suggestion as to who should pay the expenses on a first date?

This is another question that I am often asked. Times have changed in many cultures and it makes it unclear who should be paying for the expenses. Allow me to share some thoughts as you consider this:

Call me ol’ fashioned, but I believe that the man should take the initiative in paying the bills, especially as relates to dinner and related expenses for a date. I also understand that some women do not feel comfortable having the bill paid for them in initial meetings as they feel like an ‘expectation’ is created.

There should be an offer and given an opportunity

The man should take the initiative by saying something like ‘I came prepared to pay for this expense. Is that okay with you?’ If the woman is comfortable having the expense covered, she will say so. If she is not, she is shown respect and given an opportunity to respond with consideration.

When it comes to travel, I have some advice that relates:

When in a long distance relationship and travel is considered, I believe that this is an individual matter between the two people. An open and considerate dialogue should be held about all the ramifications and expenses of such a visit. The decision in how the expenses are to be covered should be a mutually embraced one.

Perhaps there is a remote reason why two people could use a city in which neither one lives to meet, but I do not think that this should be done one on one. There should at least be a friend or family member with the woman for safety and accountability reasons.

On another note: find a buddy to travel with you, never go alone.

Do not travel alone to meet anyone else in another city! I am very strong about this. My reason is very clear. I received email after email from men and women saying that they travelled to another city to meet someone that they met on the Internet and became tempted and had sex. They are filled with guilt, and most often rejection as the other person no longer wants to have anything to do with them.

I know that travelling is necessary AFTER several months have been spent getting to know one another. No relationship should consider going to the next step until they have had a chance to spend some time with each other in their own city. Initial meetings should be done with the presence of some family and friends – and not at the woman’s home. The woman should never give out our personal address until not only she is confident that she really knows the other person, but her family and friends know him and about him too.

The desire to be wanted and belong to someone:

Singles so desire to be wanted and belong to someone. It is too tempting to embrace someone under these circumstances and make a choice that one or both will regret. Do not add yourself to the list of so many adults who are living with regrets and not the joy that they desired.

Joy follows good choices – not the other way around.

1 comment on “Who should pay the expenses on a first date?” Add yours →