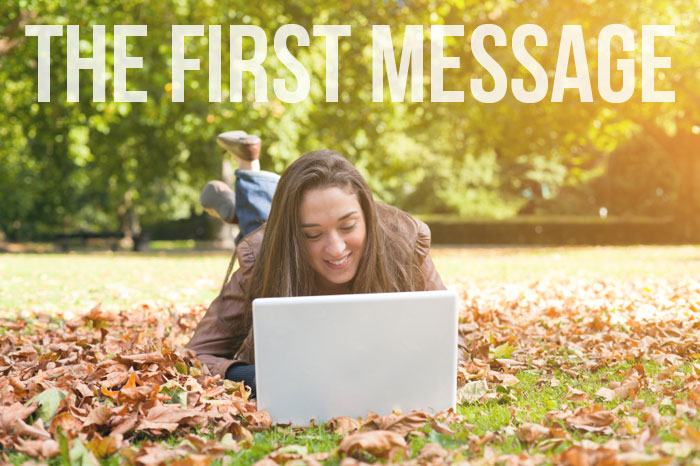 You’ve signed up with an online dating site, and you’ve found someone that you’re interested in. Instead of sitting back and waiting for them to contact you (no, really, make the first move!), you start to craft your first message to them.

So, what should your first message consist of (and not consist of)? We’ve got some tips for you to help your chances of getting a response.

Keep your message short. Give them something quick to read, whereby they can quickly respond to you. This is just the first message (of hopefully many!) remember. This also means that you don’t ramble on about yourself. They can read your (well written!) profile if they want to. It’s about you showing interest in them – and doing so via a common interest. Especially now that many will respond via their smartphone, a short message is even better – as it allows them to reply easily while on the go.

Ask them a question

Give them an easy way to respond; one where they barely have to think about it. So, ask them a quick question based on what is written in their profile. You’ve literally given them the easiest ‘in’ to quickly respond to you. Not only that, you’ve captured their interest by actually wanting to chat about something you know they find interest in.

How boring: Spelling and grammar. Yes, but you want to make the best first impression. Words misspelled, sentences that make no sense and lame short forms indicate laziness (especially in a world where auto-correct and spell check exist).

Be positive… and maybe funny

Definitely you want to come across as positive. Don’t lead off with a negative statement — discuss something in a positive light! If you’re confident in your ability to ‘be funny’ then, sure, give it a whirl but some of us really can’t pull that off and may be best to start off a little more conservative. Of course, if you do inject humor and you get a positive response then so much the better, as having a complimentary sense of humor is huge in a relationship!

Switch up the subject line

If a person it quite popular on an online dating service, they likely get a lot of messages. So, how does your message stand out when they look at an overflowing inbox? Most people will likely use “hello / hey / hi / what’s up?” etc. — so avoid those. My suggestion is to use that point of interest you chose to ask them about. Meaning, you (per above) chose to ask them more about their trip to Africa that was shown in one of their photos — so, incorporate that in the subject line!

Avoid commenting on their physical appearance

Should you comment on their appearance? I’d argue ‘no’. Stick to common interests and the like. This likely isn’t a hard and fast rule, but if done wrong it can blow up on you, so I would avoid it. They already know you likely find them physically attractive – that’s part of why you are showing interest in them.

Yes, send a written message — not a wink/smile or whatever your online dating service offers. Guys definitely can’t get away with the wink/smile — Women possibly. But, really, spend a few minutes and write an actual message – how hard is that? It shows you’re making the effort, instead of pushing the effort back on their side (well, unless you just want to wink back and forth over and over again… fun).

A caveat: Following the above mentioned steps will improve your chances of getting a response, but – of course – it’s not a guarantee. One: they simply may not like your profile or find you physically attractive – Fair enough. That said, we really do encourage everyone to respond even if it’s just to say ‘Thanks, but I don’t see a match here’. Two: They may not be a paying member of the dating site. Lots of sites keep profiles up forever regardless of the paid status of the person (at ChristianCafe.com, we remove unpaid profiles after a few months – but many dating sites do not). In either case, don’t get discouraged. Keep writing to others you find of interest. No one said this was going to be easy!

Those are my suggestions for what to write (and not write) in a first message when participating in online dating. What would you add to this list? Let us know in the comments below!

3 comments on “Online Dating First Message: What to Write (and Not Write)” Add yours →